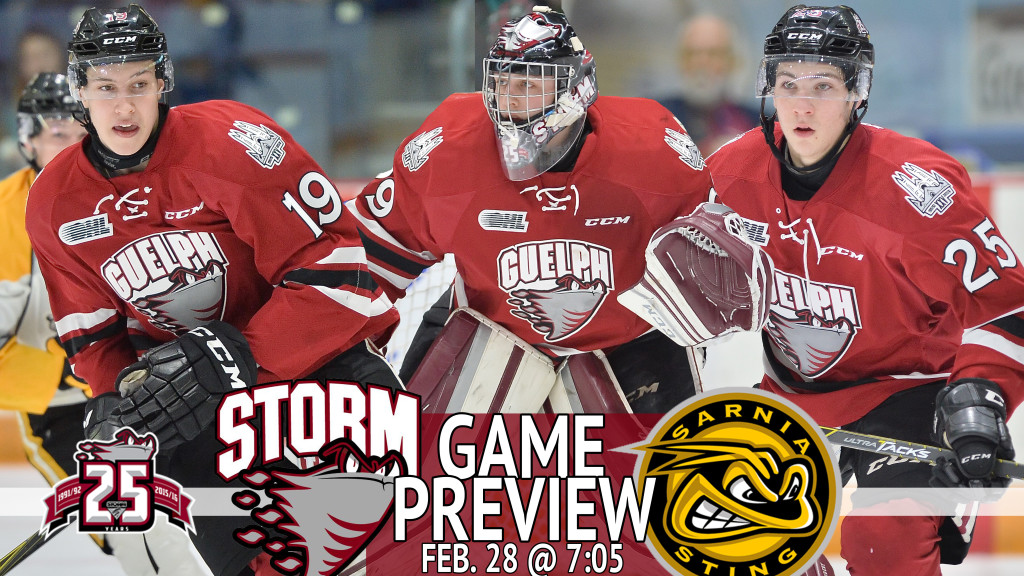 After dropping the first two games of the three-in-three stretch this weekend, the Guelph Storm will look to conclude on a winning note visiting the Sarnia Sting on Sunday night.

Squaring off in two previous match-ups so far, the Sting took the first contest 7-0 in Sarnia on Nov. 14, while most recently earning a 6-2 win in Guelph on Feb. 12.

Both teams will be heading into Sunday’s game playing their third in three nights, however, the weekend stretch has been at opposite ends of the spectrum for either squad.

The Storm, hosting the Kitchener Rangers on Friday followed with a visit to the Niagara IceDogs on Saturday night, dropped both contests 4-1 and 6-0 respectively. After being blanked by Niagara on Saturday, Guelph will be looking to get back to basics in order to snap a four-game skid. Looking at the last 10 games, the Storm are 2-8-0-0.

The Sting, on the other hand, carry a three-game win streak into Sunday’s match-up, taking a 6-2 victory over the Barrie Colts on Friday, and a 4-1 win over the Owen Sound Attack on Saturday. Standing first in their division and second overall in the Western Conference, Sarnia has gone 7-3-0-0 in their last 10 games played.

Second-year goaltender Bradley van Schubert is expected to get the start in the paint on Sunday against the Sting. Appearing in 17 games this season for the Storm, the six-foot-two, 200-pound netminder has faced some of the league’s strongest contenders – including that of the Sarnia Sting in both of the Storm’s previous tilts with the second-standing Western Conference club. Starting on Nov. 14 in Sarnia, the Barrie, Ontario native faced 42 shots, turning aside 35 in a 7-0 loss. Most recently on Feb. 12, the 1997-born netminder came in as relief in the third period against the Sting, remaining perfect through the final 20 minutes of play with seven saves. On the season, Van Schubert has compiled a 5.39 goals-against-average and a .857 save percentage.

Continuing to look at the last match-up between the teams, rookie Isaac Ratcliffe netted the Storm’s second goal in the 6-2 loss on Feb. 12, scoring his fourth of the season with 13:38 played in the third. The London, Ontario native has gone pointless in his last four games, last finding the scoresheet on Feb. 19 against the Owen Sound Attack with a three-point (one goal, two assists) effort. On the season, the six-foot-four, 192-pound forward has five goals for 12 points through 39 games played.

Getting the Storm on the board against the Sting to begin with this season, sophomore Luke Burghardt came through with a strong second-effort with nifty hands to pocket his 14th of the season 4:38 into the third on Feb. 12. The five-foot-eleven, 170-pound forward has registered 24 points (14 goals, 10 assists) in 52 games this season, more than doubling his rookie point total of five recorded in 54 games last season.

Sitting second on the Sting’s roster is second-year Pavel Zacha with 51 points (23 goals, 28 assists) in 44 games this season. Against the Storm, in two match-ups, the first round selection (sixth overall) of the New Jersey Devils in the 2015 NHL Entry Draft has potted two goals, both coming in the 7-0 win in Sarnia back on Nov. 14. In the last four games played, the six-foot-three, 213-pound forward has gone pointless only once, tallying for four assists in the stretch.

Leading the way for the Sting is former Ottawa 67 Travis Konecny. Playing in one game against the Storm this season, the third-year veteran recorded two goals and one assist in the 6-2 win, earning first star honours with the multi-point display. The Clachan, Ontario native has appeared in 24 games with the Sting, registering 44 points (19 goals, 25 assists) to total for 89 points (26 goals, 63 assists) in 53 games this season.

Also performing well against the Storm this season is 1998-born, Toronto, Ontario native Jordan Kyrou. The second-year Sting has tallied for three goals and one assist in two games against Guelph – registering a multi-point performance both times. The six-foot, 175-pound forward has 41 points (15 goals, 26 assists) in 56 games this season.