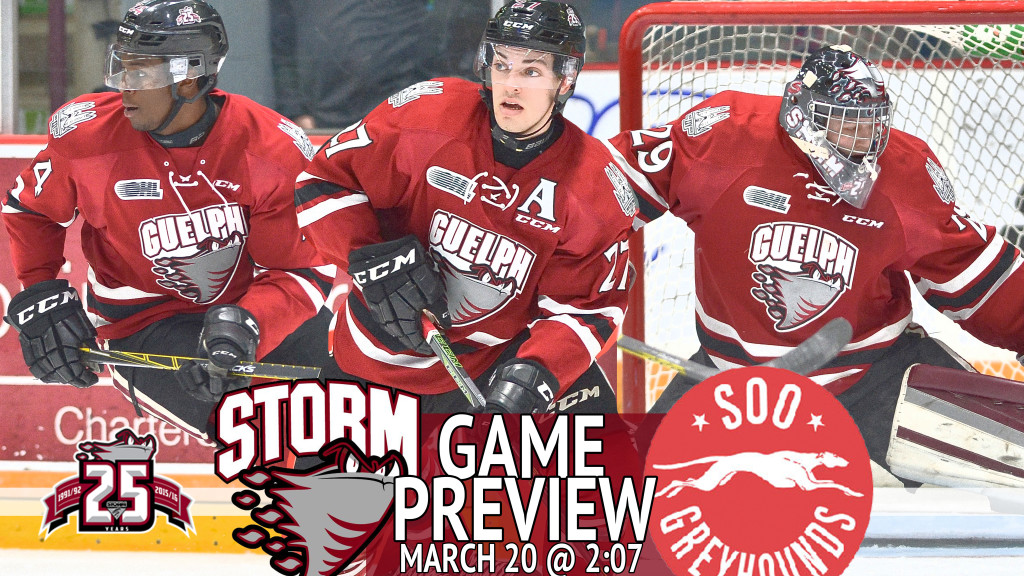 The Guelph Storm will close out the 2015-16 season visiting the Greyhounds for a 2:07pm puck drop in Sault Ste. Marie.

Visiting the Sault Ste. Marie Greyhounds (32-27-7-1) on Sunday afternoon, the Storm will be wrapping up the 2015-16 campaign. Coming off a 5-3 win over the Flint Firebirds on Saturday night, and snapping a 12-game losing skid in the process, Guelph will be pushing to conclude its 25th anniversary season on a winning note.

Likely to get the start in the paint on Sunday is second-year goaltender Bradley van Schubert. The Barrie, Ontario native last got the start on March 12 versus the Otters in Erie, turning aside 36 of 41 shots in the 5-3 loss. On the season, the six-foot-two, 200-pound netminder has posted a 5.14 goals-against-average and a .540 save percentage through 20 appearances between the pipes.

Coming off a two-point night in Flint on Saturday, third-year veteran Garrett McFadden is looking to conclude the season on a high note. Grabbing the unassisted, game-winning goal with an impressive end-to-end rush, the Storm assistant captain added an assist in the 5-3 victory over the Firebirds to earn first star honours. Leading the blueline offensively, the five-foot-eleven, 180-pound blueliner has enjoyed a career-year, posting 38 points (10 goals, 28 assists) through 67 games played. Against the Greyhounds this campaign, the Kincardine, Ontario native has one goal and one assist through three match-ups.

Second-year Givani Smith is also enjoying a career-best campaign, recording 41 points (23 goals, 18 assists) through 64 games this season, surpassing his rookie point total of 19 (seven goals, 12 assists) posted through 61 games split between the Barrie Colts and the Storm. The six-foot-one, 197-pound forward potted a goal in the 5-3 win over the Firebirds on Saturday, earning third star honours in the game.

Sophomore Boris Katchouk has enjoyed playing the Storm this season, grabbing two goals and four assists in three match-ups. Overall on the season, the Greyhounds’ rookie has posted 51 points (24 goals, 27 assists) in 63 games. Going into Sunday’s contest, the Waterloo, Ontario native is riding a five-game point streak, posting one goal and four assists in the stretch.

Third-year Greyhound Blake Speers has also had some success against the Storm this campaign, tallying one goal and three assists in three games. On the season, the Sault Ste. Marie, Ontario native has posted 70 points (24 goals, 46 assists) in 67 games, surpassing his previous career-high of 67 points (24 goals, 43 assists) in 57 games through 2014-15. The New Jersey Devils prospect, selected in the third round (67th overall) in the 2015 NHL Entry Draft, has registered eight goals and seven assists in his last 10 games, going pointless only once through the stretch.

Tim Gettinger has appeared in three games against the Storm this season, potting one goal and three assists in the match-ups. Overall, in the 59 games this campaign, the six-foot-six, 202-pound forward has recorded 37 points (15 goals, 22 assists), surpassing his previous best of 25 points compiled as a rookie through 2014-15.