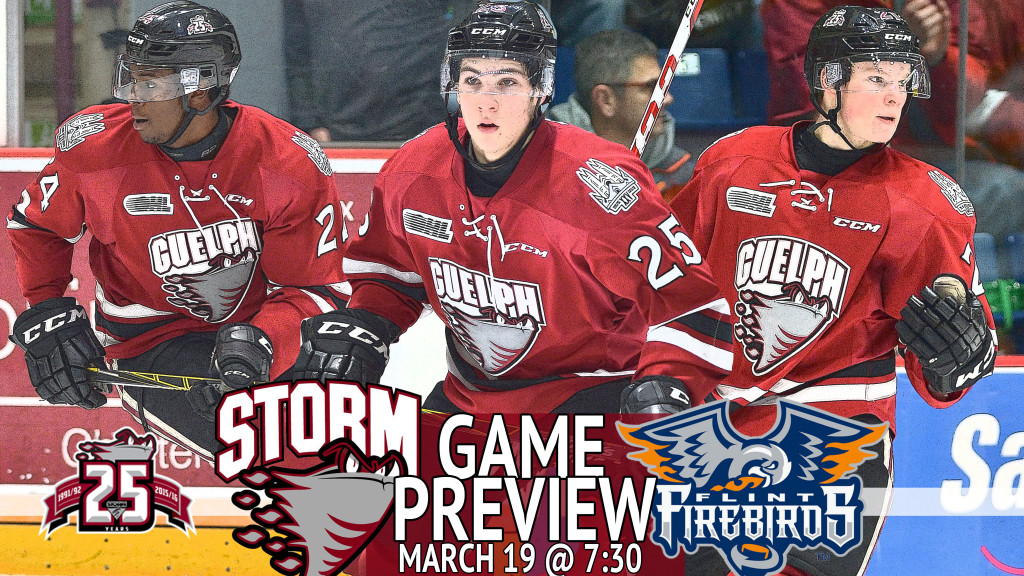 After wrapping up the 2015-16 season at home on Friday night, the Guelph Storm will hit the road to conclude the campaign, first visiting the Flint Firebirds on Saturday night.

With both teams entering the tilt with losing skids in their back pockets, a streak will be snapped no matter the outcome. The Storm, heading into the contest without a win in their last 12 games, will be pushing to get back into the win-column before traveling to Sault Ste. Marie on Sunday for their last game of the campaign. The Firebirds, on the other hand, will be looking to put an end to a four-game skid. Over their last 10, Flint has compiled a 2-8-0-0 record.

Second-year James McEwan has led the way for the Storm for the majority of the 2015-16 campaign, currently sitting with 49 points (24 goals, 25 assists) through 66 games played. The Chatham, Ontario native has also had some luck against the Firebirds, registering one goal and two assists in three match-ups with the Western Conference opponent.

Right behind is fellow sophomore Givani Smith. The Brampton, Ontario native has 22 goals for 40 points in 63 games this season. Most recently, the six-foot-one, 197-pound forward has posted two goals and one assist in his last three games played. Against the Firebirds, the 2016 NHL Draft eligible prospect has posted two assists in three contests, including registering seven shots on net in the last match-up with Flint on Jan. 10.

Third among forwards in production is Luke Burghardt, who stands fourth overall on the roster in points with 30 (17 goals, 13 assists) through 60 games this season. In his second major junior season, the five-foot-eleven, 170-pound forward has more than surpassed his rookie point total of five recorded in 54 games in 2014-15. Heading into Saturday’s match-up, the Bowmanville, Ontario native is riding a five-game point streak, tallying for three goals and two assists in the stretch. Against the Firebirds, Burghardt is a notable as well, compiling two goals and one assist in three match-ups.

Will Bitten stands atop the Firebirds’ roster with 65 points (30 goals, 35 assists) in 66 games this season. The second-year forward is enjoying a career-year, surpassing his rookie point total of 31 points (15 goals, 16 assists) compiled in 63 games last season. Against the Storm, the Gloucester, Ontario native has posted one goal and four assists in three match-ups.

Also doing some damage against the Storm this season is Nicholas Caamano. The six-foot-one, 184-pound forward has recorded three goals in three games versus Guelph, finding the back of the net in each contest. Overall on the campaign, the Ancaster, Ontario native has 40 points (19 goals, 17 assists) in 63 games.

Mathieu Henderson has had some success against the Storm this season as well, posting two goals and one assist in three games. Enjoying a career-year, the third-year veteran defenseman has compiled 36 points (10 goals, 26 assists) in 67 games this season, surpassing his previous best of 34 points set in 68 games as a sophomore through 2014-15.