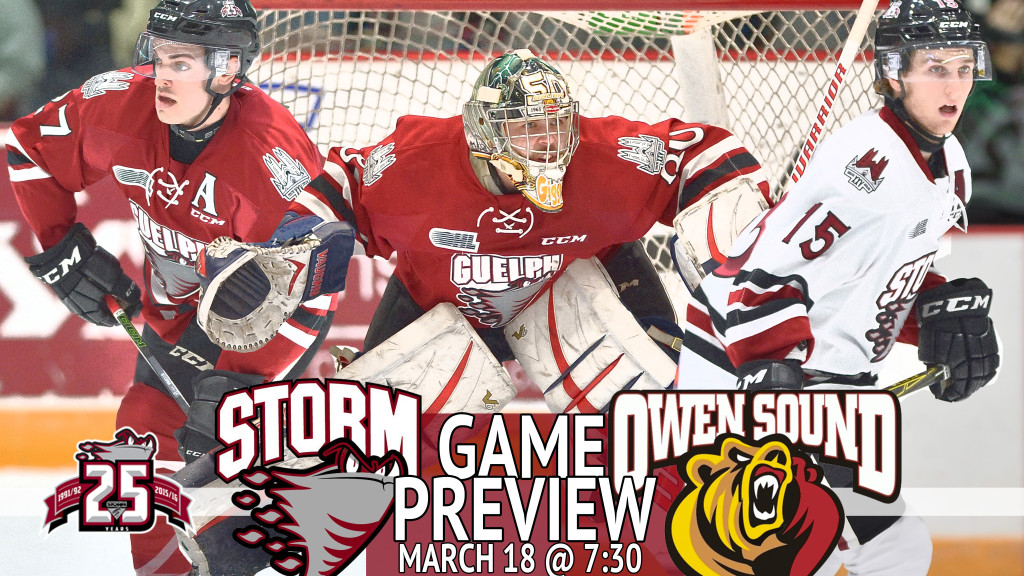 In what will be the final home game of the 2015-16 season for the Guelph Storm, the Owen Sound Attack visit the Royal City on Friday for a 7:30pm puck drop.

Don’t miss the last chance to see your Guelph Storm at home this season! Click here to get your tickets to Friday’s game vs. the Owen Sound Attack!

And it’ll be a good one.

In what will be the final game of the 2015-16 campaign on home ice for the Storm, the crimson jerseys will be looking to find the win-column in the closest season series the team has had this year. Facing off seven times already, the home team hasn’t lost in the Highway Six rivalry this season, with the Attack currently holding a 4-3 series lead.

Bringing an 11-game losing streak into the contest, the Storm will look be pushing to wrap things up on home ice with a win, snapping the skid and earning their first victory since back on Feb. 19 – a 5-3 win over the Attack.

Coming into Friday’s game, the Attack are sixth in the Western Conference – sitting three points ahead of the seventh-seeded Sault Ste. Marie Greyhounds. Through the last 10 games, the Attack have compiled a 5-4-1-0 record.

Overage netminder Michael Giugovaz is likely going to be appearing in the blue paint at the Sleeman Centre for the final time on Friday night. The Brampton, Ontario native – originally a 10th round (184th overall) pick of the Peterborough Petes in the 2011 OHL Priority Selection – was acquired from the Windsor Spitfires in November, and has since posted a 3.69 goals-against-average and a .900 save percentage through 31 games with the Storm. Overall, the six-foot, 166-pound goaltender has strung together a 9-16-2-2 record, including one shutout, with Guelph.

On the backend, defenseman Garrett McFadden is the one to watch, leading all Storm blue liners with a career-high 35 points (nine goals, 26 assists) through 65 games this season, putting th Kincardine, Ontario native 24th in production among league defensemen. Looking to Friday’s match-up, in seven games against the Attack this season, the third-year veteran has posted three assists.

Fellow assistant captain Marc Stevens isn’t one to ignore in the areas of effort and leadership either, also posting two points (one goal, one assist) in six games against the Attack this season. The six-foot, 185-pound forward is three points back of matching his previous career-high of 10 points, set in both 2014-15 (in 68 games played) and 2013-14 (in 43 games played). More recently, in the last two games, the Turkey Point, Ontario native has potted one goal.

Leading the way for the Attack is third-year veteran Bryson Cianfrone, tallying for 50 points (17 goals, 33 assists) in 56 games played. The Stoney Creek, Ontario native is just two points separated from matching his career-high of 52 points previously set in 63 games through the 2014-15 season. Looking to games against the Storm this campaign, the five-foot-eight, 188-pound forward has posted two goals and six assists in five games.

In the goals department, sophomore Petrus Palmu has done the most damage for the Attack, potting 23 through 50 games this season. Overall, the Joensuu, Finland native has 48 points this campaign, recording eight points (three goals, five assists) in six games against the Storm.

Fourth-year veteran Jaden Lindo has also had some success against the Storm this season, finding the back of the net for three goals while adding an assist in seven contests. On the season, through 65 games played, the Pittsburgh Penguins prospect has 28 points (13 goals, 15 assists) – a career-high for the six-foot-two, 208-pound forward after surpassing his previous best of 22 points posted through 63 games as a rookie in 2012-13.

In the latter half of a home-and-home series, the Attack earned a 4-1 victory in Owen Sound following a 5-3 Storm win the night prior in Guelph on Feb. 19. To see the complete highlights from the last Storm win, see the video below.