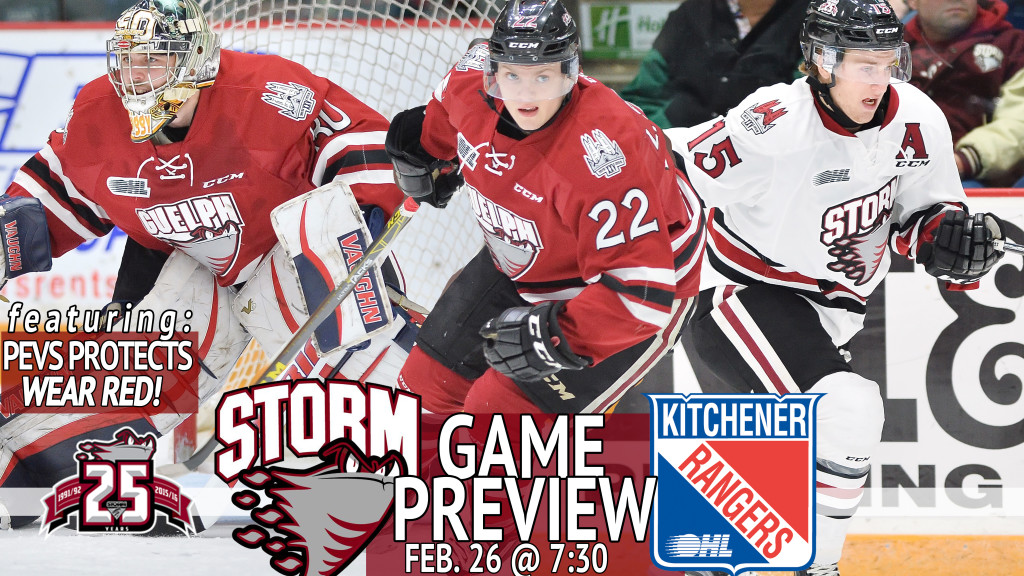 The Guelph Storm and the Kitchener Rangers will conclude the Highway Seven rivalry for the season on Friday as the Storm also host Pevs Protects Night.

Friday night will also feature Pevs Protects, an iniative started by Guelph native Rich Peverley in conjunction with the Heart and Stroke Foundtion to raise both awareness and funds for AED purchases and CPR training in the city of Guelph. Fans attending the game are encouraged to wear red. For more information, CLICK HERE.

It should be interesting.

No doubt a chippy match-up, the Midwest Division oppponents will be meeting for the eighth and final time this Friday, and neither squad will be leaving anything on the table.

On Feb. 23, the Rangers got the best of the Storm, jumping ahead to a 2-0 lead with first and second period markers. Guelph then pulled within a goal as Liam Stevens found the back of the net for his fifth of the year, but the Rangers extended their lead once again 31 seconds into the third.

The Storm managed to pull within a goal just over a minute later, this time with a tally from Marc Stevens, but wouldn’t be able to get on even-terms despite coming within a goal twice on the game.

Assistant captain and third-year veteran Marc Stevens was noticeably Guelph’s best player outside of the crease this past Tuesday, registering a goal and an assist for third star recognition. Off the scoresheet, the Turkey Point, Ontario native came out of the gates with energy and created opportunities to not only find the back of the net a few more times himself, but also put forth a solid display with a complete 200-foot game for a full 60-minutes. The six-foot, 185-pound forward has six points (two goals, four assists) in 24 games this season.

Michael Giugovaz is a clear standout as, more often than not, a pillar for the Storm sticking with contending teams like that of the Rangers. This past Tuesday, the overage netminder turned aside 39 of 43 saves, giving Guelph the chance to pull within a goal twice in the contest. On the season, in 25 games with the Storm, the six-foot, 166-pound goaltender has a 9-10-2-2 record with one shutout, while posting a 3.32 goals-against-average and a .911 save percentage.

Sophomore Adam Mascherin pocketed the Rangers’ second and final marker in the 4-2 win on Tuesday, now totaling for an impressive 32 goals in 54 games this season. The five-foot-nine, 199-pound forward also added a helper for a three-point display, earning first star honours. Overall, the Maple, Ontario native has 72 points on the campaign, more than surpassing his rookie point total of 29, previously set in 62 games during the 2014-15 season.

Assisting on both of Mascherin’s goals was fourth-year defenseman Dylan Di Perna with a two-point performance, also named the game’s second star with the effort. The six-foot-one, 203-pound blue liner has 23 points (four goals, 19 assists) in 57 games this season, enjoying a career-year with the previous best of seven points registered in both 2014-15 and as a rookie in 2012-13 with the Kingston Frontenacs.