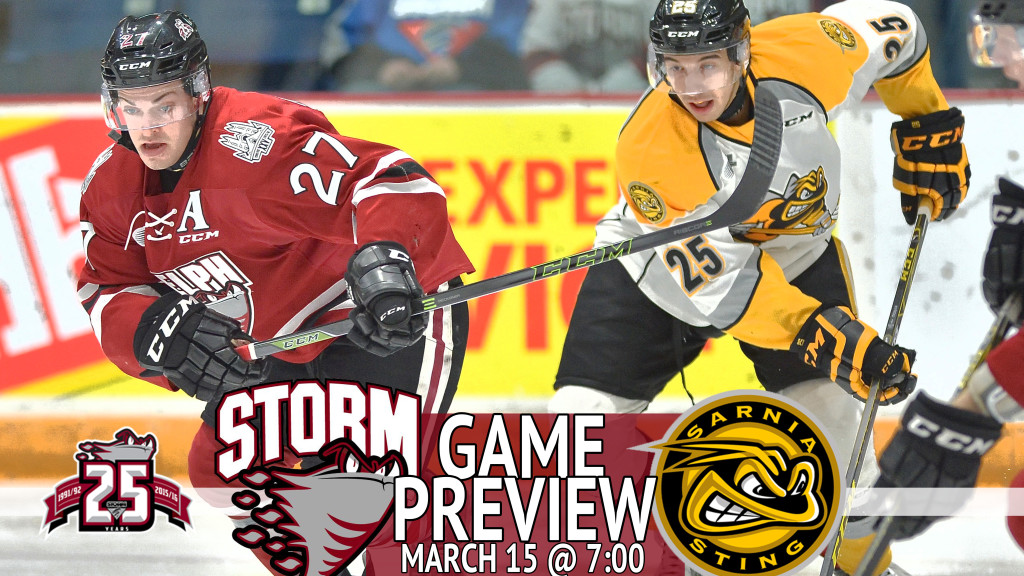 The Guelph Storm host the Sarnia Sting for the final time this season, facing off against the Western Conference’s second-standing team on Tuesday night.

Spend your March Break with the Storm! Watch your Storm face off with the Sting this coming Tuesday for just $15 (regular seats, availability permitting) just by saying the name of your school when purchasing tickets at the Guelph Storm Box Office or Stone Road Mall Kiosk! For more information, call (519) 847-9690.

In three previous meetings, the Western Conference’s second-standing squad has outscored the Storm 18-4.

Moving into Tuesday’s match-up, the Storm will not only look to put an end to a 10-game losing skid – with the last win coming back on Feb. 19 in a 5-3 result over the Owen Sound Attack – but also put an end to the Sting’s three-game win streak.

Over the last 10 games, the Sting have strung together a 7-3-0-0 record, dropping only one contest in the last eight games.

Puck drop is slated for 7:00pm at the Sleeman Centre.

Standing atop the blue line for the Storm is third-year veteran Garrett McFadden – a noticeably consistent leader through solid play both on the back end and offensively. Ranked 22nd overall among OHL defenseman with 35 points (nine goals, 26 assists) in 64 games this season, the Kincardine, Ontario native is enjoying a career-high year after surpassing his previous best of 18 points compiled through 56 games in 2014-15.

Ranked 49th among league freshman, Liam Stevens has showcased evident developed play as of late. Most recently, netting a goal against the Erie Otters in the 5-3 loss to the Erie Otters on Saturday night, the Waterdown, Ontario native has totaled for 12 points (seven goals, five assists) through 59 games this season. Looking to Tuesday’s match-up, the five-foot-eight, 187-pound forward has an assist in three games against the Sarnia Sting.

Sophomore Pavel Zacha has done some damage offensively to the Storm this season, potting two goals in two games played. The 1997-born, Brno, Czech Republic native has totaled for 56 points (27 goals, 29 assists) in 46 games this season – almost doubling his rookie point total of 34 posted in 37 games in 2014-15. In the last five games played, the first round selection (sixth overall) of the New Jersey Devils in the 2015 NHL Entry Draft has registered four goals and two assists.

Another second-year forward in Jordan Kyrou has had some success against the Storm this season, recording three goals and one assist in three match-ups. Overall on the season, the 1998-born, Toronto, Ontario native has totaled for 44 points (15 goals, 29 assists) in 61 games, surpassing his rookie point total of 35 (13 goals, 23 assists) posted in 63 games in 2014-15.

Coming Up in Storm City…