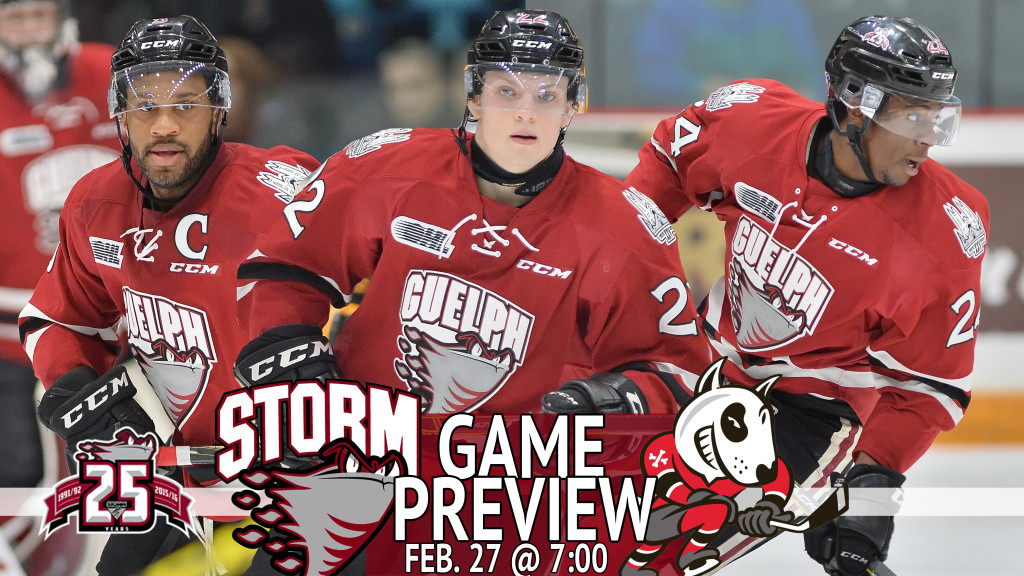 After falling 4-1 to the Kitchener Rangers on Friday night, the Guelph Storm will be looking to rebound visiting the Niagara IceDogs on Saturday.

Going hand-in-hand, the Storm will be looking to not only rebound visiting the cross-conference club, but also pushing to snap a three-game losing skid as well.

Niagara, sitting sixth in the Eastern Conference with 62 points, last had game action on Feb. 22 – earning 4-1 victory over the Ottawa 67’s.

Looking to the second and final meeting between the clubs, puck drop is slated for 7:00pm.

Rookie Liam Stevens has been one of Guelph’s best players as of late, scoring the lone goal in the 4-1 loss to the Rangers on Friday night – his second tally in just as many games. Over the last five games played, the five-foot-eight, 187-pound forward has three goals. Overall on the season, the Waterdown, Ontario native has six goals for 10 points in 52 games. The second round (27th overall) pick in the 2015 OHL Priority Selection has also noteably been putting in the effort in all areas of the ice, attaching a strong backcheck and smart plays away from the puck to his success on the scoresheet recently.

Givani Smith had the one helper on the goal against the Rangers on Friday, bringing the sophomore to 34 points in 54 games this season. Sitting with 19 goals on the campaign, the Brampton, Ontario native is just one removed from reaching the 20-goal mark, a solid improvement from the seven registered in 30 games with the Storm as a rookie last season. Most recently, the six-foot-one, 197-pound forward has four assists in his last six games played.

Looking to the last time the Storm and the IceDogs met – with Niagara taking a 5-1 win on Oct. 23 in Guelph – captain C.J. Garcia registered Guelph’s only goal, getting the home team on the board with a power play marker in the final frame. On Friday against Kitchener, the Pickering, Ontario native put eight shots on the Rangers’ goal – a team-high effort. In 57 games this season, the six-foot, 184-pound defenseman has posted 21 points (three goals, 18 assists).

Atop the IceDogs’ roster is first round (28th overall) selection of the New York Islanders in the 2014 NHL Entry Draft: Josh Ho-Sang. The six-foot, 170-pound forward has posted 65 points (16 goals, 49 assists) in 54 games this season with Niagara, while compiling six points (one goal, five assists) in the last seven games played. The last time the Storm and the IceDogs met, the Thornhill, Ontario native recorded a goal and an assist in the 5-1 victory.

Earning first star recognition in the last match-up between the cross-conference clubs, Johnny Corneil grabbed a goal and two assists in the win. On the season, the third-year veteran has 35 points (17 goals, 18 assists) in 56 games played, almost doubling his previous career-high of 18 points recorded in 52 games as a sophomore through 2014-15. In Niagara’s last game against Ottawa on Feb. 22, Corneil broke a six-game pointless streak with an assist.

With third star honours in Niagara’s last game action on Feb. 22, goaltender Alex Nedelijkovic backstopped the IceDogs to a 4-1 win over the Ottawa 67’s, making 24 of 25 saves on the night. The six-foot, 190-pound netminder has compiled a 9-9-0-1 record in 19 games with the IceDogs since being acquired from the Flint Firebirds, posting a 2.60 goals-against-average and a .907 save-percentage.