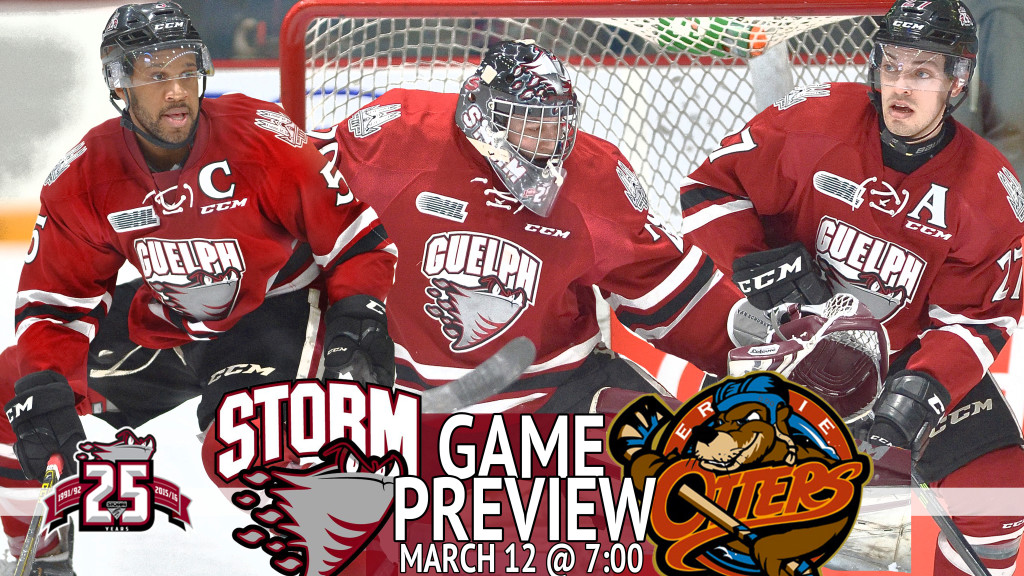 The Guelph Storm and the Erie Otters will conclude their six-game season series in Erie on Saturday night in what will be the second of a home-and-home stretch after facing off in Guelph on Friday.

Beginning a home-and-home series on Friday in Guelph, the Otters took their fifth victory over the Storm this campaign in a 4-1 result, snapping a two-game skid.

The Storm, on the other hand, have now lost nine in a row and will be looking to snap the streak with an upset win come Saturday night in Erie.

Puck drop is slated for 7pm.

Getting the start in the paint on Friday night, second-year netminder Bradley van Schubert turned aside 35 of 38 shots in the 4-1 loss to the Erie Otters. The Barrie, Ontario native earned third star honours for the performance, appearing in his 19th game of the 2015-16 campaign.

Offensively, captain C.J. Garcia got the Storm on the board on Friday, netting his fourth of the season with just under two minutes remaining in the game. The six-foot, 184-pound defenseman has 23 points through 63 games this season, reaching a career-high in both goals (four) and points after surpassing his previous best of 19 registered in the 2014-15 season.

Leading the way for the Otters in the 4-1 victory for Erie was sophomore Alex DeBrincat. The Farmington Hills, Michigan native potted three goals and an assist for a four-point effort, earning the first star of the contest. In four games against the Storm this season, the five-foot-seven, 160-pound forward has five goals and four assists.

Captain Dylan Strome also had a strong night for the Otters, registering one goal and three assists for his own four-point performance. The Arizona Coyotes prospect was given second star honours for his display. Overall against the Storm this season, the six-foot-three, 194-pound forward has posted four goals and six assists.

Coming Up in Storm City…