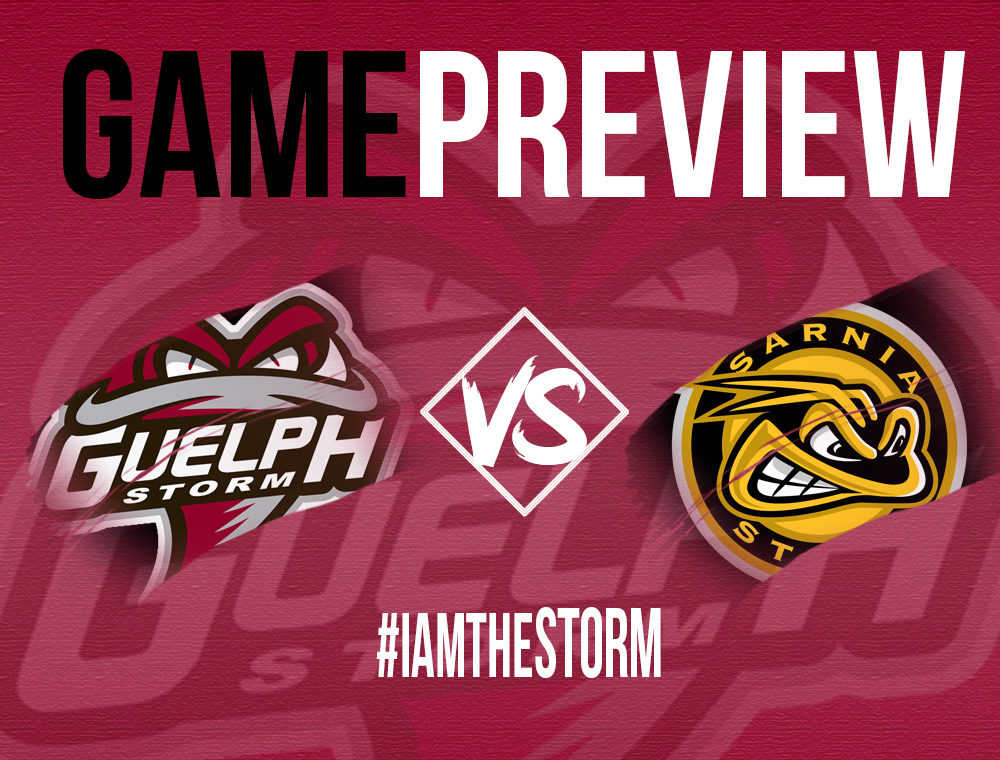 The Storm look to continue their winning ways as they welcome the Sarnia Sting at the Sleeman Centre on Friday night at 7:30pm. Last season, Sarnia won all 4 games of the head to head matchup where three of the games were decided by just one goal. Sarnia’s top scorer for the season series was Adam Ruzicka with three goals and two assists while Liam Hawel led the way for the Storm with two goals and two assists.

The Sting are undefeated to start the 2018-19 season with a record of 3-0-0-0. Anthony Salinitri is the team’s leading scorer with four points in two games. The Storm are currently on a two game winning streak that included a three goal performance by Cedric Ralph in Guelph’s 6-5  overtime victory over the Spirit last Saturday.

Fans can purchase tickets for tonight’s game or any home game in the season series in-person at the Guelph Storm Box Office, by calling (519) 837-9690 or online at ticketmaster.com here.

The Sting had a strong 2017-2018 campaign finishing 3rd in the Western Conference. Last year also saw the Sting make the playoffs and win their first-round playoff series against the Windsor Spitfires, before losing a tough six game series to the Kitchener Rangers. Sarnia’s special teams finished 5th in the league on the powerplay and 1st in penalty killing.

Sarnia is looking to continue their success without last season’s MVP Jordan Kyrou, who made the jump to the St. Louis Blues of the NHL after finishing 3rd in the league in points (39G, 70A, 109P). Along with Jordan Kyrou, other Sarnia players Drake Rymsha, Jonathan Ang, Cam Dineen and Jordan Ernst are no longer with the team and were some of the Sting’s leading scorers last season.

Sarnia Sting have 3 players that have been drafted by NHL clubs including LW Anthony Salinitri (PHI – 6th Round), C Ryan McGregor (TOR – 6th Round) and C Adam Ruzicka (CAL – 4th Round).

Sarnia’s 1st Round pick (9th Overall) in the 2017 OHL Priority Selection Jamieson Rees will be looked upon to be one the leaders on the Sting this season. Jamieson had a good rookie season on a very strong Sarnia team, and will be looking to improve his overall numbers and game this season on a much younger and less experienced team.

Liam Hawel has had a strong start to the 2018-2019 season with four goals and four assists in four games thus far. Liam has looked very good playing on a line with other NHL draftees Isaac Ratcliffe and Nate Schnarr. Liam, along with his line mates will be looked upon to create offense for the Storm this season and is primed to set career high numbers.

Halli Krzyzaniak will be at the Sleeman Centre for IIHF World Girls’ Hockey Day tonight. The Olympic hopeful will be signing autographs during both intermissions behind section 115 and taking part in the puck drop prior to the game.

The Storm finish off the Thanksgiving weekend with a game in Flint on Saturday for at 7pm. The next home game is Friday October 12th as they host the Owen Sound Attack at 7:30pm. Fans can purchase tickets either in-person at the Sleeman Centre Box Office, by calling (519) 837-9690 or online at ticketmaster.com here.