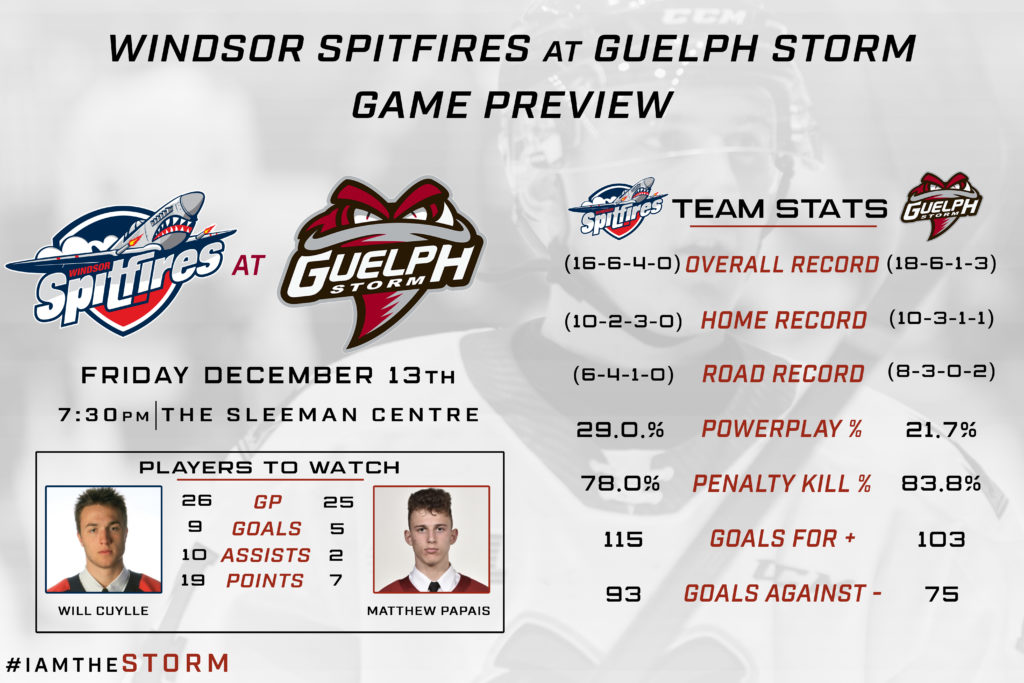 The Windsor Spitfires visit the Sleeman Centre on Friday night for their first visit of the season against the Guelph Storm at 7:30pm. Friday’s game is mini stick night sponsored by Home Depot.

Get tickets to Windsor vs. Guelph

Drafted in the 7th round of the 2018 OHL Priority Draft, Matthew has had a strong start for the Guelph Storm in his first full season with the team. Papais scored 1 assist in 12 games last year for the team, but has 5 goals and 7 points through 25 games thus far this year.

The 6’.03” Toronto, ON native has had a good sophomore season thus far for the Spitfires. Cuylle finished his rookie season with 26 goals and 41 points, and is currently on pace to set new career high numbers in assists and points this year.

Saturday, December 14th, is the annual Teddy Bear Toss game sponsored by Brent Johnson of Wayne Pitman Ford Lincoln at the Sleeman Centre as the Storm host the Kitchener Rangers at 2pm.

Last year the teddy bear goal was scored by forward Barret Kirwin at the halfway point of the first period.  Kirwin’s goal brought on a storm of over 3,500 stuffed animals onto the ice!

As we get ready for Saturday’s game, here are some Teddy Bear Toss Facts…

– Over 18 seasons, the Storm has collected over 54,500 new, or ‘slightly loved’ stuffed toys that have been donated to charities in Guelph and around the world.

– The earliest Storm goal recorded on a Teddy Bear Toss night in Guelph was in 2009 when Matt Sisca scored at 1:13 of the first period.

– The Storm were held scoreless only once on Teddy Bear Toss night, December 2nd, 2002 against the Brampton Battalion (4-0).

The Storm will welcome the Kitchener Rangers on Saturday afternoon for the annual teddy bear toss game at 2:00pm. Guelph will then travel to Oshawa on Sunday to face the Generals at 6:05pm before their holiday break. Guelph will then return to action in Peterborough on Saturday December 28th at 7:05pm.