Game Stories: Storm come out on top over Battalion 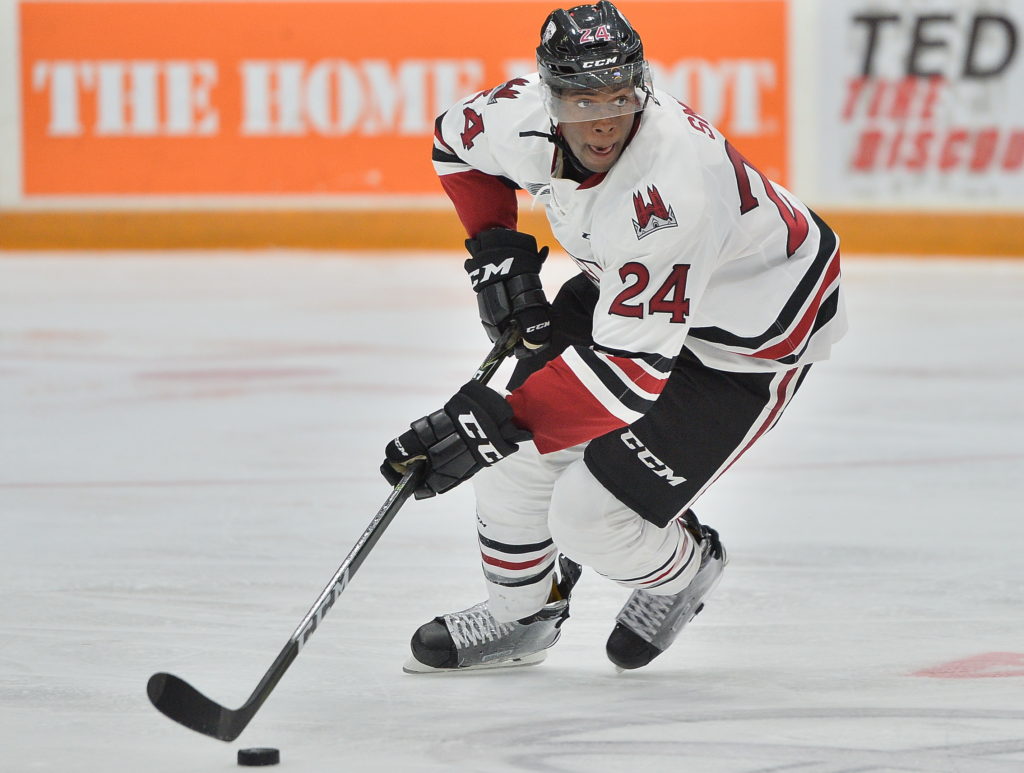 On Friday night, the Storm welcomed the North Bay Battalion to town for the first of two meetings this season. Guelph was looking for a strong start to their first three-in-three of the season, the Storm would look to Liam Herbst in goal, while North Bay countered with Brent Moran. The Storm couldn’t have asked for a better way to start the weekend as they beat the Battalion 5-2.

North Bay got out to a hot start to the first period putting heavy pressure on the Storm and netminder Herbst, but the veteran goalie was on his game making key saves early.

The momentum started to shift when, Givani Smith got the storm on the board first, as he entered the zone and went top shelf on Moran at the 9:15 mark of the period.

The Battalion battled back and continued to create several chances but were unable to solve Herbst. The shots after the first period were 18-6 in

The shots after the first period were 18-6 in favour of the Battalion.

Guelph used the one-goal lead to change the momentum, and it was the Storm who had the best chances early in the second frame.

The Storm headed to the power play seven minutes into the game and they made no mistake as Nate Schnarr put the puck past a diving Moran off a great pass by Ryan Merkley.

Guelph continued to apply pressure and capitalized once again as Smith scored his second of the game, this time on the doorstep, Austin Hall and Garret McFadden picked up the assists on the goal. Herbst was once again solid throughout the period. The shots after the second period were 26-23 in

Herbst was once again solid throughout the period. The shots after the second period were 26-23 in favour of the visitors.

Desperate to find the back of the net, the Battalion had strong scoring chances early but again Herbst was equal to the task. North Bay headed to the power play as Albert Michnac received a

The Battalion would catch a break when Albert Michnac received a five-minute major. It didn’t take long for the Battalion to score on the five-minute power play as Adam Thilander beat Herbst from the point. The storm were able to kill off the rest of the major without conceding another goal.

Back on the attack, the Storm padded their lead when Cedric Ralph scored his first career OHL goal at the 14:52 mark in the period, Nic Sicoly, and Barret Kirwin were accredited with the assists, the assist marks Kirwin’s first career OHL point. Battalion did not take long to answer as Brett Hargrave scored just 35 seconds after. With just under a minute left in the game Matt Hotchkiss scored on the empty net to give the storm the 5-2 lead. The final shots were 37-29 in

With just under a minute left in the game, Matt Hotchkiss scored on the empty net to secure the 5-2 victory.

The final shots were 37-29 in favour of the visitors.

The Storm are back in action tomorrow night as they travel to Barrie to take on the Colts.