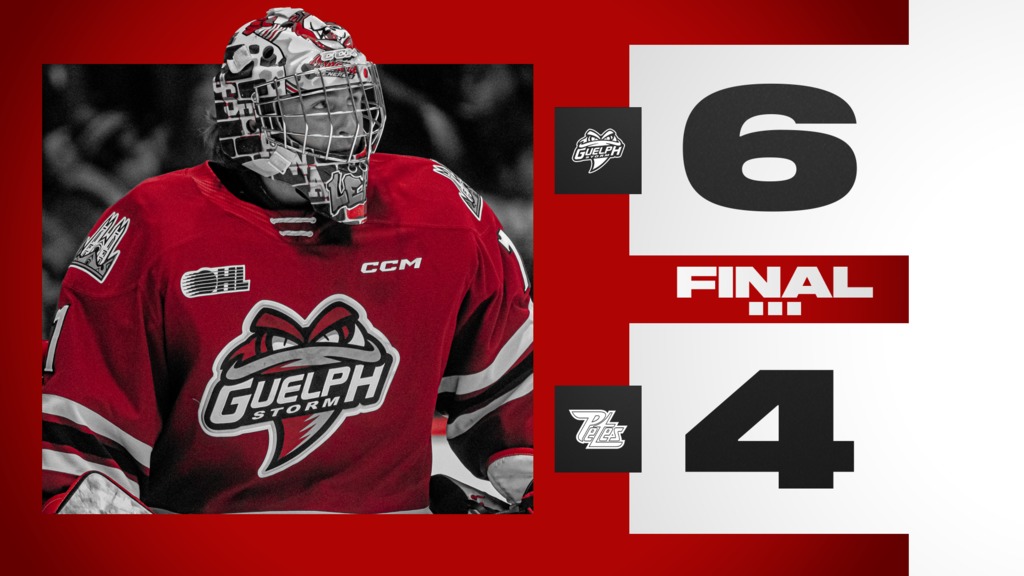 A barrage of early third period goals led the Guelph Storm to a 6-4 victory over the Peterborough Petes Friday night at the Sleeman Centre.

Jesse Fishman scored the game-winning goal on a tip-in when he deflected an Isaac Enright shot from the point past Peterborough goaltender Michael Simpson in front of a sold out crowd at the Sleeman Centre.

Matthew Poitras scored the opening goal of the game 8:27 in when he fired a wrist shot past Michael Simpson, capitalizing on a feed from Max Namestnikov. It was his tenth goal and team-leading 49th point of the season.

The Petes tied it at one when Connor Lockhart scored on a tip-in off a Samuel Mayer shot from beyond the faceoff cricle to the right of Guelph goalie Patrick Leaver with 2 seconds remaining in the opening frame. It was Lockhart’s 17th goal of the 2022-23 campaign.

Braeden Bowman intercepted a Konnor Smith pass and deked out Simpson to cash in and give Guelph an early second period lead. It was Bowman’s 16th goal of th 2022-23 season.

The lead didnt last long, Owen Beck scored wired a wrist shot over the shoulder of Leaver just 1:08 after Bowman’s marker. The Canadian World Juniors representative has scored 19 goals this season and 40 in his Ontario Hockey League career.

Connor Lockhart potted his second goal of the game when he cleaned up a scrum in front of the Storm net for the second Peterborough goal in 1:32. It was 18th goal of the season for the Vancouver Canucks prospect, and his 50th in the OHL, he’s second on the Petes in points with 51 this year.

The Storm jumped out to a 5-3 lead after scoring three goals less than two minutes apart in the first 5 minutes of the final frame.

Ben McFarlane evened the game at three, cashing in on a rebound opportunity off the pad of Simpson on the power play. It was McFarlane’s seventh goal in 2022-23 and his 25th in the OHL.

Chandler Romeo scored the second goal of back-to-back-to-back blows from Guelph when he wired a slap shot from the point. It his first goal as a member of the Storm and his second of the season.

Jesse Fishman added a goal with a tip in on an Isaac Enright shot from the point. It was Fishman’s first goal with the Storm and his fifth of the year, Enright also earned his first point with Guelph on the assist.

It didn’t take long for Peterborough to strike back with a goal of their own, J.R. Avon scored his 20th goal of the campaign when he took advantage of a rebound opportunity just 16 seconds after the barrage of Guelph scoring.

Braeden Bowman added an insurance marker with 10.5 seconds remaining on the clock to put the final nail in the coffin and secure the Guelph win. It was his second of the game and 17th of the season, he’s on a six game goal-streak with 10 goals and 13 points during the hot stretch.

Jesse Fishman’s goal was his third game-winner in his OHL career and his first of the season. The recently aquired forward has found the net five times in 34 games played this year with eight points.

“It speaks on the character of the team, we came together and everyone is willing to do the small things and the right things just to win,” said Fishman, post-game.

“Nobody’s worried about themselves, it was a huge effort from everyone.”

The Guelph Storm are back in action at the Sleeman Centre for a Sunday matinee against the Kingston Frontenacs at 2:00pm. They’ll get some time off before taking on their Midwest Division rival Owen Sound Attack on Friday, January 27 at 7:30pm in Guelph. Tickets to Sundays game against Kingston can be purchased by clicking here.