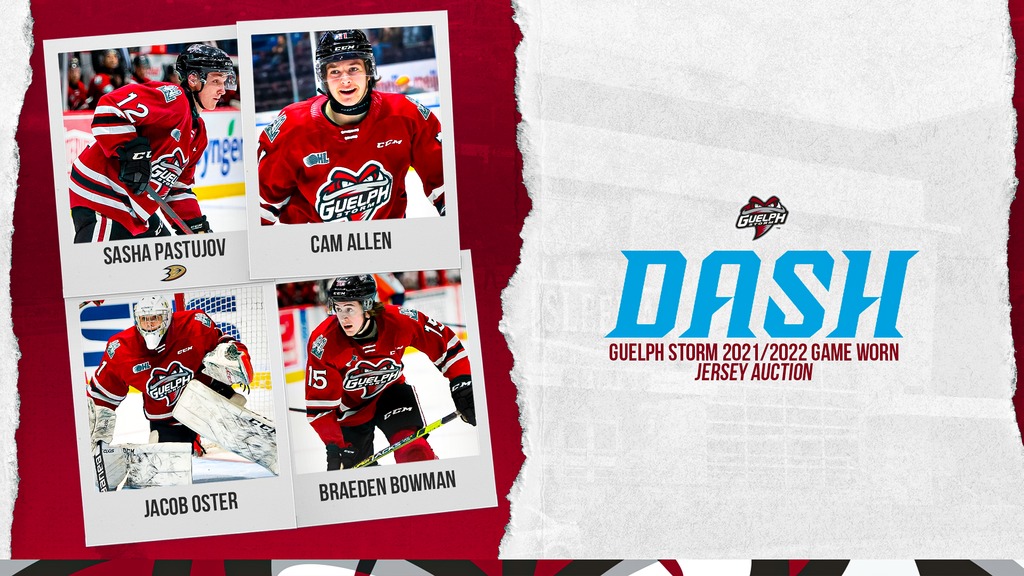 We are auctioning off 2021-2022 game-worn jerseys from Jacob Oster, Braeden Bowman, Cam Allen, and Sasha Pastujov. The auction will end Saturday, August 13th starting at 7:00pm

Jacob Oster was selected 92nd overall by the Storm in the 2020 OHL Priority Selection. In his first season with the Storm, Jacob appeared in 34 games, closing the season with 2.93 goals against average, .892 SV%, and a 16-8-4 WLT record. In October 2021, Jacob was named the OHL Goaltender of the Week after stopping 49 of the 52 shots he faced in a pair of wins.

Braeden Bowman was selected 96th overall by the Storm in the 2019 OHL Priority Selection. In his second season with the Storm, Braeden appeared in 60 games, notching 27 goals and 10 assists for 37 points.

Cam Allen was selected 3rd overall by the Storm in the 2021 OHL Priority Selection. In his first season with the Storm, Cam appeared in 65 games, notching 13 goals and 24 assists for 37 points. Cam has racked up a few honours as a rookie, including the 2022 Guelph Storm Rookie of the Year Award, the OHL Emms Family Award for Rookie of the Year, and a nomination for CHL Rookie of the Year. Cam was named to the OHL All-Rookie Team, as voted by OHL General Managers. Additionally, he has appeared in both the 2021 U17 Capital City Challenge and the 2022 U18 Hlinka Gretzky Cup. Where he has had the privilege of being named captain for both events, and finished both with a gold medal.

Sasha Pastujov was selected 276th overall by the Storm in the 2019 OHL Priority Selection, and 66th overall by the Anaheim Ducks in the 2021 NHL Entry Draft. In his first season with the Storm, Sasha appeared in 65 games, notching 34 goals and 42 assists for 76 points. Sasha racked up a few honours this season, including the Tony Camilleri Memorial Playmaker Trophy for Top Scorer, the Roger Neilson Memorial Award for the top academic player in post-secondary studies, and the 2022 Most Valuable Player Award. Sasha was named the OHL Player of the Month in October 2021, after notching 17 points through 10 games.

If you require shipping you will be able to purchase it following the conclusion of the auction.