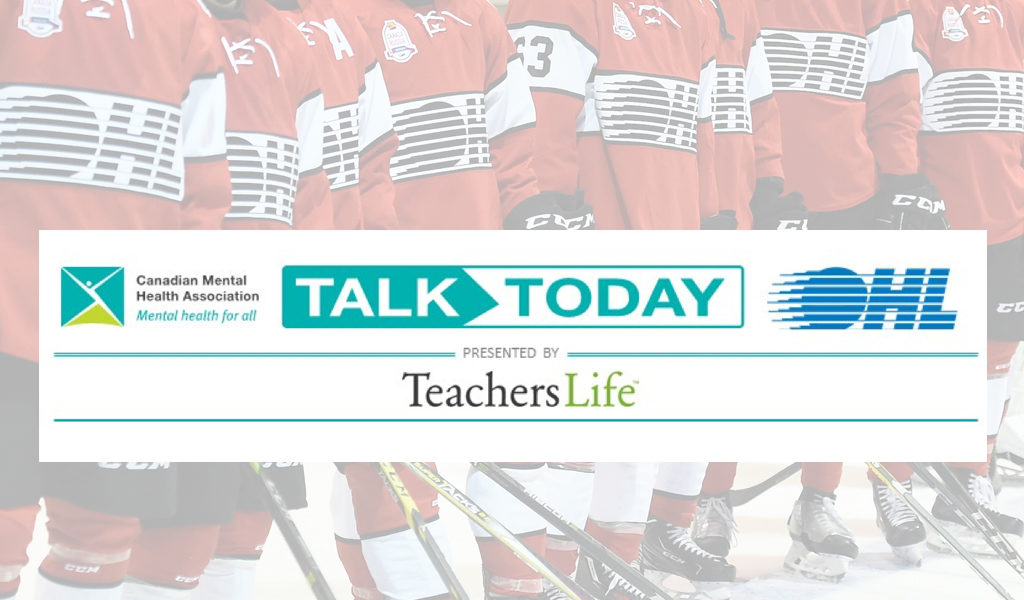 [GUELPH, January 31, 2019] – The Guelph Storm have partnered with the Canadian Mental Health Association, Waterloo Wellington for a mental health awareness game on Friday February 8, 2019 when the Guelph Storm take on the Sarnia Sting at the Sleeman Centre.

The game day experience will have several features to promote the importance of mental health, including:

This mental health awareness game is part of the Guelph Storms’ ongoing partnership with CMHA Waterloo Wellington and its Talk Today program. Originally launched by CMHA Ontario in partnership with the Ontario Hockey League in 2014, Talk Today provides an important opportunity to address the mental health needs of athletes across Canada. Through this program, over 1,000 OHL players and over 400 coaches, billets and staff have received mental health and suicide prevention training across the league.

The key piece of the Talk Today program has been to educate players about mental health and suicide prevention. Each team is also linked to a CMHA mental health coach, who provides support and mental health resources to individuals in need. Additionally, CMHA experts work with players from the Guelph Storm to deliver an in-class presentation about mental wellness to elementary school students.

“Talk Today provides mental health support and raises suicide awareness among the Guelph Storm organization and throughout the OHL. By hosting this event, the Guelph Storm are helping eliminate the stigma and discrimination associated with mental health issues and encouraging discussion within the community about mental health,” said Fred Wagner, executive director of CMHA Waterloo Wellington.

“Partnering with the Canadian Mental Health Association makes perfect sense for our club. We are proud to be part of the Talk Today program, and the skills that our players are learning are ones they will carry for life. This is about much more than just hockey,” said Rick Gaetz, Guelph Storm Partner and Governor.

Canadian Mental Health Association (CMHA), Ontario is a not-for-profit, charitable organization funded by the provincial Ministry of Health and Long-Term Care. We work to improve the lives of all Ontarians through leadership, collaboration and continual pursuit of excellence in community-based mental health and addictions services. Our vision is a society that embraces and invests in the mental health of all people. We are a trusted advisor to government, contributing to health systems development through policy formulation and recommendations that promote positive mental health. Our 30 local CMHA branches, together with community-based mental health and addictions service providers across the province, serve approximately 500,000 Ontarians each year.

About the Ontario Hockey League:

The Ontario Hockey League is a proud member of the Canadian Hockey League which is the world’s largest development hockey league with 60 teams in nine Canadian provinces and four American states. In addition to the OHL, the CHL is made up of the Quebec Major Junior Hockey League and the Western Hockey League. Last season, more than nine million fans attended CHL games in the regular season, playoffs and at the Mastercard Memorial Cup. The CHL supplies more players to the National Hockey League and U Sports than any other league.  For more information, visit www.ontariohockeyleague.com.