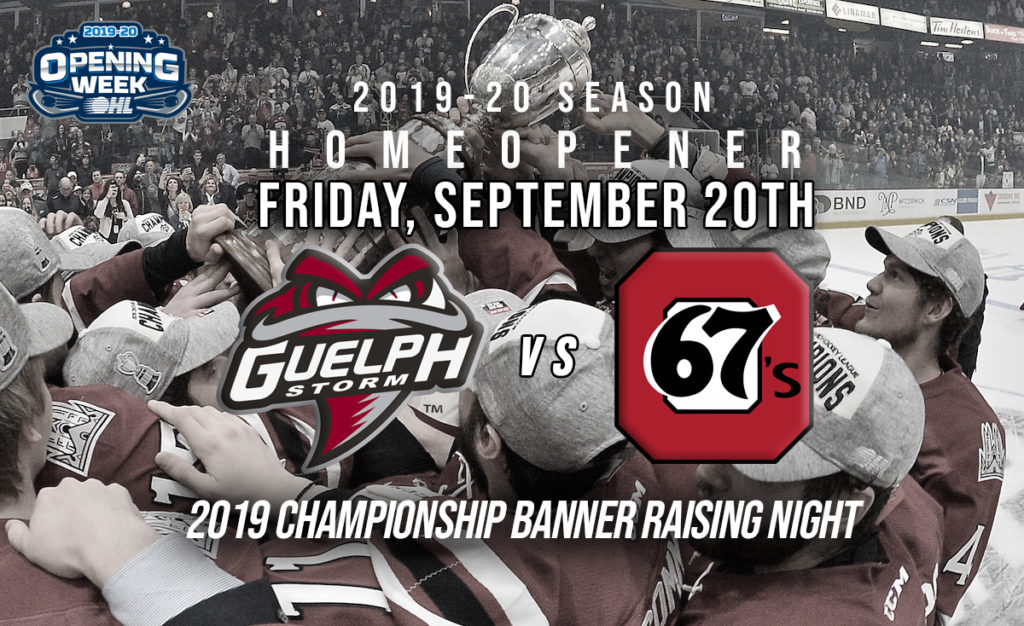 THIS Friday, September 20th will be a busy one in Storm City! Don’t miss out on our Home Opener with the 2018-19 OHL Champion Banner raising ceremony pre- game, Street Fest and the first annual Rita Lets Kids Play Night!

From 4-7pm in Storm Alley (located beside the Sleeman Centre), fans can take part in our Street Fest! There will be food trucks, live entertainment, and a free kids area with a bouncy castle and face painting. The J.Ross Robertson Trophy will also be in attendance for fans who would like to take pictures. The Street Fest is FREE for those who have a ticket to the home opener against the 67’s at 7:30pm.

The last opponent the Storm played last year will be the first opponent they play this year. Defeating Ottawa in six games at the Sleeman Centre last May to be crowned OHL Champs, the Storm face off against the 67’s four months later to kick off the 2019-20 regular season.  We will be celebrating the 2018-19 OHL Championship with a banner raising ceremony pre game. Puck drop is 7:30pm, don’t be late!

Rita Let’s Kids play is a program established by Rita Campbell’s daughter Kim in conjunction with Guelph Minor Hockey to honour the long time Storm Ambassador and City of Guelph Volunteer. Rita was known for helping under privileged kids by often buying equipment or paying registration fees. As such, Guelph Minor Hockey and the Storm are asking fans to donate any new or used ringette or hockey equipment at the game on Friday September 20th to continue Rita’s tradition.

Known by many as ‘the pin’ lady, Rita proudly wore a coat full of pins signifying the number of lives she touched in the hockey community as new and old friends a like would often donate to her growing collection.