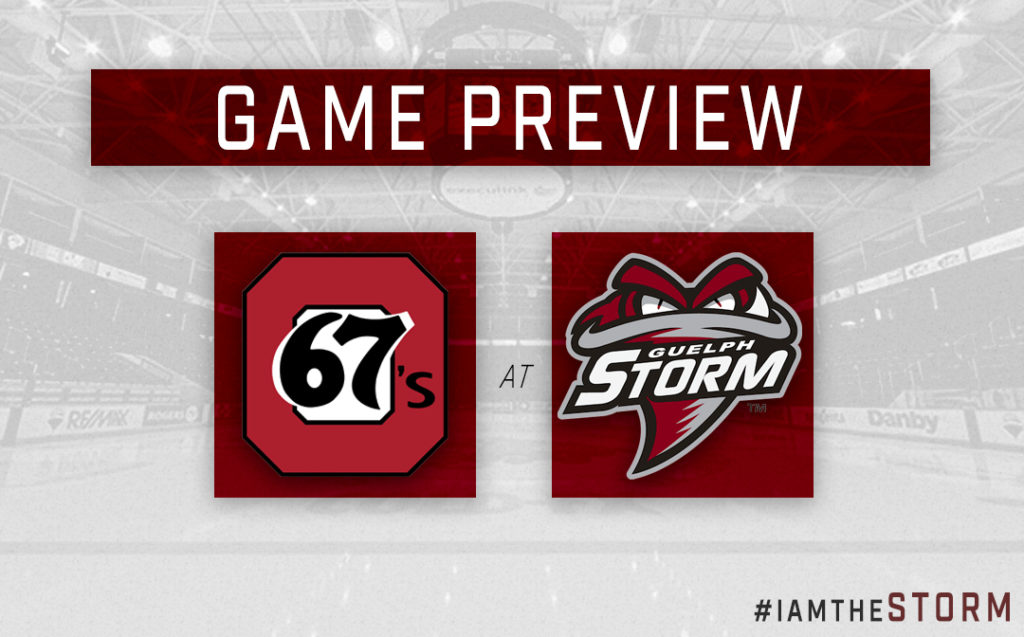 Defeating the 67’s in the OHL finals last season in a thrilling six game series, the Storm won their fourth championship in team history on home ice.

The OHL Championship banner will be raised ahead of puck drop on Friday evening. The Storm will also host the first annual Rita Let’s Kids Play Night a program established by Rita Campbell’s daughter Kim in conjunction with Guelph Minor Hockey to honour the long time Storm Ambassador and City of Guelph Volunteer. Rita was known for helping under privileged kids by often buying equipment or paying registration fees. As such, Guelph Minor Hockey and the Storm are asking fans to donate any new or used ringette or hockey equipment at the game on Friday September 20th to continue Rita’s tradition.

Street Fest runs from 4:00pm – 7:00pm in Storm Alley (located beside the Sleeman Centre). Fans with tickets to the home opener can take part as there will be food trucks, live entertainment, and a free kids area with a bouncy castle and face painting. The J.Ross Robertson Trophy will also be in attendance for fans who would like to take pictures. The Street Fest is FREE for those who have a ticket to the home opener against the 67’s at 7:30pm.

The Storm head into the 2019-2020 season as the defending OHL Champions having defeated the 67’s in last years final.

This season, the Storm will begin their rebuild, as they have half of their former roster moving on from junior hockey which will lead to an increase in rookies throughout the lineup.

Some of the new faces in the lineup this season include Andrei Bakanov (1st Round – Import), Danny Zhilkin (1st Round), Jacob Maillet (2nd Round), Marko Sikic (3rd Round) and Cooper Walker (5th Round).

The Ottawa 67’s will look to contend for an OHL Championship after losing out to the Guelph Storm in last seasons finals.

The 67’s will have some new faces in their lineup with newly drafted rookies Jack Matier (1st Round), Jack Beck (2nd Round), Brendan Sirizzoti (2nd Round), Yanic Crete (3rd Round), Thomas Johnston (3rd Round), Teddy Sawyer (3rd Round) and Anthony Costantini (6th Round).

Cam Hillis was named the 29th captain in team history this summer and will be looked upon to lead this developing team into the playoffs. Hillis was drafted by the Montreal Canadiens in the 3rd round (66th overall) in the 2018 NHL entry draft and has scored 81 points in 93 career games with the Guelph Storm.

Marco Rossi finished his rookie season with 65 points in 53 games during the 67’s regular season and added another 22 points throughout the playoffs. Rossi is heading into his sophomore season as a highly ranked NHL prospect and will play a vital role in Ottawa not only returning to the post-season, but also making a deep run for the OHL Championship.

Rita Let’s Kids play is a program established by Rita Campbell’s daughter Kim in conjunction with Guelph Minor Hockey to honour the long-time Storm Ambassador and City of Guelph Volunteer. Rita was known for helping under privileged kids by often buying equipment or paying registration fees. As such, Guelph Minor Hockey and the Storm are asking fans to donate any new or used ringette or hockey equipment at the game on Friday September 20th to continue Rita’s tradition.

Known by many as ‘the pin’ lady, Rita proudly wore a coat full of pins signifying the number of lives she touched in the hockey community as new and old friends alike would often donate to her growing collection.