‘I’d do anything for my brother’: Guelph Storm rookie helps sibling battling cancer 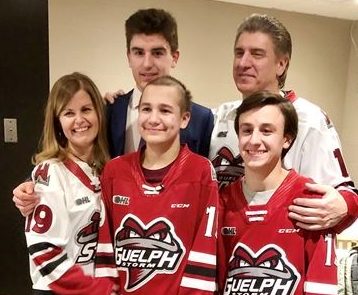 Sometimes we get carried away with the importance we place on sports. Certain fans of professional teams live and die with wins and losses, but every so often something slaps you in the face to bring you back to reality.

There was such a wake-up call last Friday night when the Guelph Storm hosted the Sarnia Sting. It was Pink the Rink Night in support of cancer research and one of the guests of honour was 14-year-old Luka Sikic, brother of Storm rookie Marko Sikic. Luka is bravely fighting cancer for a second time in his young life, originally diagnosed with Leukemia at the age of 10.

“Three years ago was the original diagnosis and that was a tough one because it was out of the blue,” said Luka’s mother, Michelle Sikic. “Then the second diagnosis was out of the blue as well because we had passed the two year mark (where he was cancer free). Having to tell your kid when he was 10 he has cancer is not something I ever thought I’d have to do, but to have to do it twice is so tough,” she said welling up with tears. “But he is the strongest, most positive kid I know.”

As for Marko, as he tries to make his mark in the Ontario Hockey League, he has played a major role in Luka’s fight. Back in August, as he was getting ready for his first training camp, he donated his bone marrow to give Luka a fighting chance. Thankfully he was a strong match for his younger sibling.

“It was an easy decision,” said the 16-year-old Marko who is very close to his siblings, “I’d do anything to help my brother. On my off days I go see him and we all just keep our hopes and prayers up.”

For a mother, watching one son donate his marrow to help safe the life of his brother brought forth a flood of feelings.

“Scary, thankful, nauseating, sleepless because you’re thinking thank God we have Marko who is a 9-out-of-10 match, then you’re going please God let this work because if it doesn’t a 16-year-old boy is going to think ‘I didn’t do enough for my brother’,” she said before breaking down into tears.

Right now Luka’s body is fighting off antibodies that are attacking the new blood received from Marko.

“His count dropped down to three but now it’s gone up to 15 so we’re hoping one more dose of Rituximab and hopefully it will get rid of the antibodies so we can go home,” said Michelle. “We’re hoping, fingers crossed and God willing, we’ll be home for Christmas.”

As inspiring as it was for Marko to have his brother see him play for the Storm for the first time live, it was even more special for Luka.

“Tonight was the most amazing night that we’ve had since May because it included our entire family, our friends, the Guelph Storm, the cancer research team all putting this together,” said Michelle who was there with Luka’s dad Steve and older brother Jordan. “He was lighting up on the drive here he was so excited. He said ‘I get to see my brother and I get to see him do what he loves’. Something so normal becomes the most amazing thing ever.”

Since the bone marrow transplant at Sick Kids Hospital in Toronto August 13th, the Sikic’s have been staying at Ronald McDonald House to be close to Luka.

It was a beautiful moment as Luka and Marko embraced after the ceremonial face-off before the game. It was the first time Luka had been allowed to leave the hospital since his transplant and while it meant the world to his family, it was a sobering reminder of the 4,400 fans in attendance that life is a beautiful and precious gift.

From the Land of Oz … The Guelph Storm ran their win streak to 10 games with a dominating 3-0 win over Sarnia Friday but Saturday afternoon it came to an end with a 4-3 shootout loss in Hamilton…The Storm lost overage forward Cedric Ralph to an upper body injury Friday and overage defenceman Fedor Gordeev on Saturday. It is unknown how long each will be out of the line-up…The Storm is tied for second in the Western Conference with London and Flint with 30 points each, three back of the streaking Windsor Spitfires