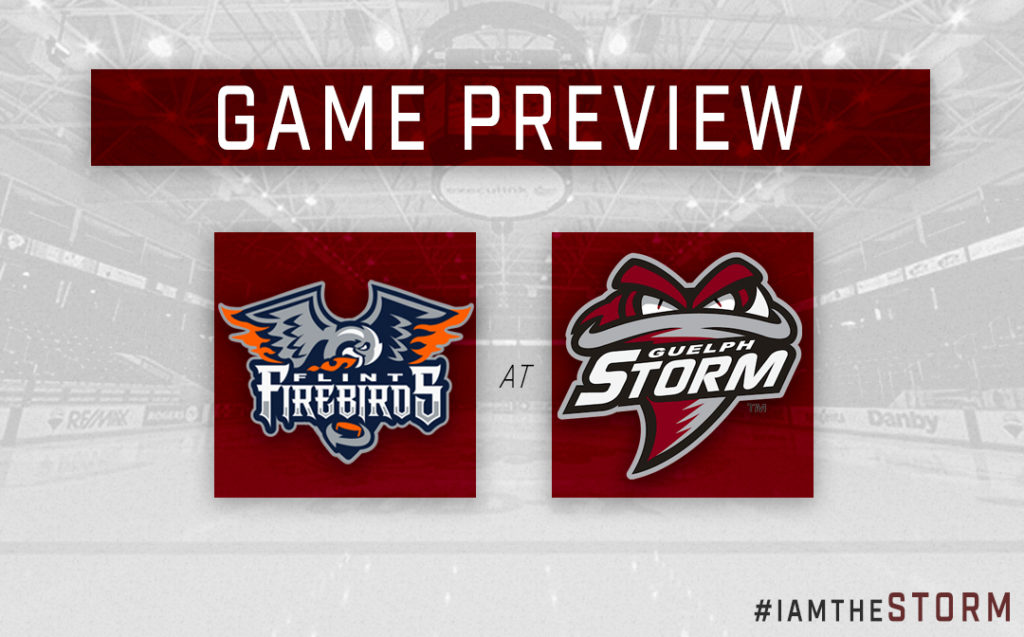 The Guelph Storm host the Flint Firebirds on Friday October 4th for their first of four meetings this season. Guelph won last season’s head to head series 4-0 and outscored the Firebirds 27-9 in those games.

October 4th is the IIHF World Girls’ Ice Hockey Weekend as we celebrate the female game across the country. Meet Olympian and NHL All-Star participant Renata Fast during the first intermission of Friday’s game for a meet and greet.

Flint has had a strong start to the 2019-2020 season with a 3-1-0-0 record heading into Friday night, with 1stround import pick Yevgei Oksentyuk leading the team with 6 points in 4 games. Friday’s game also marks the return of OHL Champion goaltender Anthony Popovich who spent his first 3 seasons with the Storm before being dealt to the Firebirds in September.

The Guelph Storm split their home and home series with the Owen Sound Attack last weekend to give them a 1-1-0-1 record heading into Friday’s game with rookie Andrei Bakanov leading the Storm in scoring with 2 goals and 3 points in 3 games played.

The Firebirds finished last season in 19th place with 38 points and got the second overall draft pick in the 2019 OHL Draft.

Flint has a few returning leaders from last season, that should help compete for a playoff spot in the Western Conference. Some of the returning leaders consist of captain Ty Dellandrea, Jake Durham, Ethan Keppen, Cody Morgan, Jack Wismer and 2nd overall pick in the 2018 OHL Draft Evan Vierling.

Flint has four players that have been drafted to NHL clubs including Dennis Busby (ARI – 5th Round), Vladislav Kolyachonok (FLA – 2nd Round), Ty Dellandrea (DAL – 1st Round) and Ethan Keppen (VAN – 4th Round).

Andrei Bakanov was drafted in the 1st round 38th overall in the 2019 Import draft and has made a big impact with the Storm thus far. Andrei has scored 2 goals and added 1 assist through the opening 3 games of the season and will look to continue his early season success on Friday night against the Flint Firebirds.

Ty Dellandrea was drafted in the 1st round 13th overall by the Dallas Stars in the 2018 NHL Draft and will continue to lead the Firebirds as the captain this season. Ty led the Firebirds last season in points with 63 and has 148 career OHL points heading into Friday’s game against the Guelph Storm.

The Guelph Storm will head to Sarnia to take on the Sting on Sunday October 6th before they return home to play the Soo Greyhounds on Friday October 11th at the Sleeman Centre.