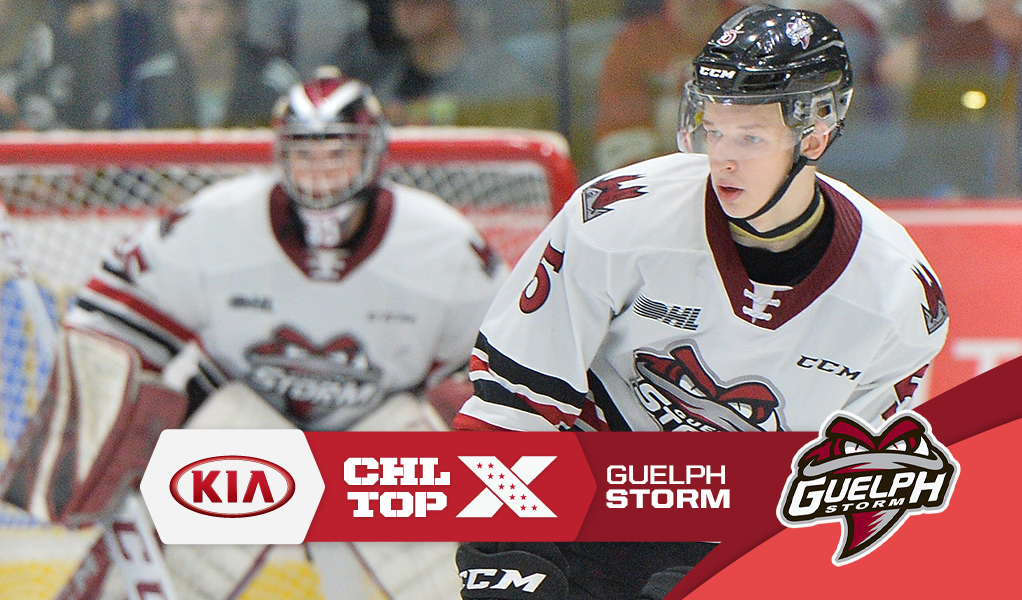 How’s this for an encore:

The defending J. Ross Robertson Cup champion Guelph Storm are one of the league’s hottest teams riding a nine-game win streak to earn the spotlight in the latest Kia CHL Top-10 Rankings.

The surging Storm wrapped up the last week of action with a trio of victories over the Owen Sound Attack and Saginaw Spirit before closing out with Tuesday’s 5-1 road win over the rival Kitchener Rangers to improve to 12-4-1-2 on the season, good for 27 points and first place in the OHL’s Midwest Division.

Leading the way for the Storm is fourth-year forward Pavel Gogolev, who has amassed 34 points counting 13 goals and 21 assists across 19 appearances to sit tied for fifth in league scoring. With points in four of his past five outings, Gogolev again got on the scoresheet in Tuesday’s victory over the Rangers as he recorded one goal and two assists en route to first-star recognition. In all, it marked the 11th time this season the Russian-born forward has notched a multi-point showing, with his best coming in early November against the Soo Greyhounds as he finished with a hat-trick plus two assists.

Coming up with a modest 28 points a year ago – including three goals and six assists in eight contests after his midseason acquisition from the Peterborough Petes – Gogolev has emerged as a key offensive weapon for Guelph, particularly following a handful of departures like Nick Suzuki (Montreal Canadiens) and former captain Isaac Ratcliffe (Lehigh Valley Phantoms) who helped guide the club to its second league title in six years last spring.

Those absences have opened opportunities for the Storm’s next wave of scorers, including new leader and Canadiens prospect Cam Hillis, who through 19 appearances has registered eight goals and 22 assists, making the Storm one of just four OHL clubs with two players to reach the 30-point plateau through mid-November. Overall, the many departures sees the Storm icing a younger squad this season as already eight rookies have skated in at least a dozen games.

“This is a hard-working group of kids, we are getting some big time performances from our older guys, and our goaltending has been strong,” Storm general manager and head coach George Burnett told Paul Osborne of the Guelph Mercury Tribune.

Among the fresh faces in Guelph is Russian right-wing Andrei Bakanov, the 38th overall selection from the 2019 CHL Import Draft who leads all Storm first years with five goals and five assists for 10 points in 18 contests.

The young talent also extends to the blue line where 17-year-old defenceman Daniil Chayka, chosen seventh overall in the 2018 OHL Priority Selection and a projected early pick in the 2021 NHL Draft, continues to grow his offensive game. After finishing with 14 points across 56 appearances a year ago, the World Under-17 and Hlinka Gretzky Cup Russian champion has already tallied six points and nine assists through 19 games in 2019-20 to lead all Storm defenders in scoring. This season, Chayka has come away with four multi-point efforts, including a two-goal showing that counted the eventual game-winner against the Rangers on Nov. 8 to power his club to a 6-3 victory and claim second-star honours.

“I’m more confident,” Chayka told Osborne. “It is my second season so I feel like when I get more ice time I have more confidence.”

Rounding out the Storm roster is another emerging talent in third-year netminder Nico Daws, who after two seasons of carrying the backup duties has taken hold of the starter’s job. Through 13 appearances, the 18-year-old has come away with an outstanding 9-1-1-2 showing while topping the charts with a 2.33 goals-against average and .934 save percentage plus a perfect showing during his half of a Team OHL victory in Game 3 of the CIBC Canada Russia Series.

That type of performance has put the Burlington, Ont., native on the radar for a spot with Team Canada at the 2020 IIHF World Junior Hockey Championship in Czech Republic. His recent play has certainly helped as back-to-back victories over the Attack and Spirit in which he combined for 58 saves were played before Hockey Canada goaltending consultant Fred Brathwaite, who took in both performances as the Canadian brass continues its evaluations ahead of the roster selection.

“I knew I could be good this year but I’m surprising myself with the way I’m playing,” Daws admitted to Osborne following a stretch of eight consecutive victories and without a regulation loss since mid-October. “Every game I’m playing is boosting my confidence and making me feel even better about the way I can play.”

In all, it makes up an exciting Storm squad filled with youthful exuberance that brings plenty of offensive punch as well as strong defensive support on the back end. It’s a combination that has led to many victories this season, one Daws and his Storm teammates hope continues as they look to extend their win streak to double digits in a weekend schedule that counts a home date against the Sarnia Sting before heading to Hamilton to face off with the Bulldogs.