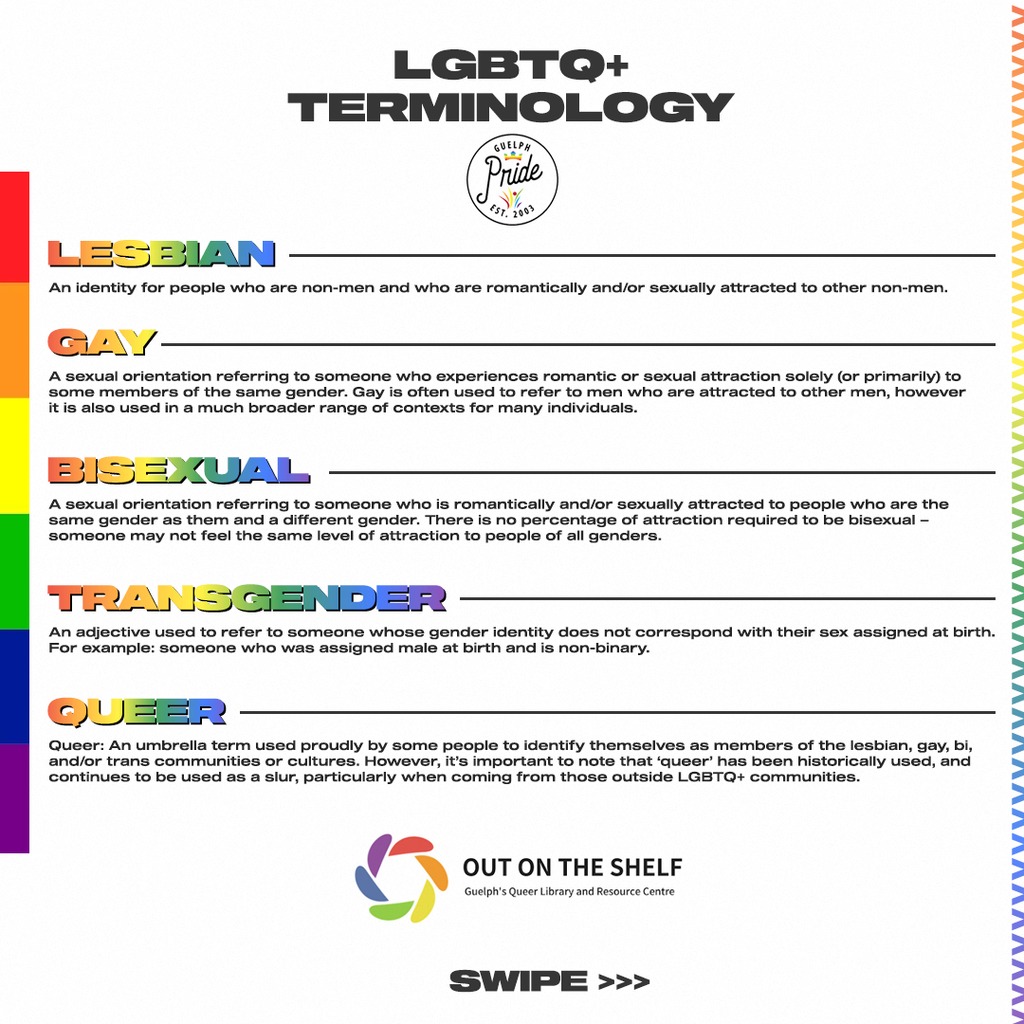 We recognize that becoming a true LGBTQ+ ally takes time, thought, compassion, understanding and action. We also recognize that there’s so many things to learn about the LGBTQ+ community that it can sometimes feel a little overwhelming and a bit confusing at first—BUT that’s ok!

In consultation with Guelph Pride and Out on the Shelf, the Guelph Storm has put together the following list of LGBTQ+ terminologies and overview of Pronouns.

Ally: A person who actively works to challenge heterosexism, sexism, homophobia, biphobia, and transphobia in themselves and others because they want to make the world a safer and more accepting space for all.

Agender/Genderless/Gender Neutral: A gender identity referring to someone who has no (or very little) connection to gender, no personal alignment with the concepts of either man or woman, and/or someone who sees themselves as existing without gender.

Bisexual: A sexual orientation referring to someone who is romantically and/or sexually attracted to people who are the same gender as them and a different gender. There is no percentage of attraction required to be bisexual – someone may not feel the same level of attraction to people of all genders.

Cisgender: An adjective used to refer to someone whose gender identity corresponds with their sex assigned at birth. For example: someone who was assigned male at birth and is a man.

Gay: A sexual orientation referring to someone who experiences romantic or sexual attraction solely (or primarily) to some members of the same gender. Gay is often used to refer to men who are attracted to other men, however it is also used in a much broader range of contexts for many individuals.

Gender: A state of being a man, a woman, both, neither, somewhere in between or something entirely different (Mardell, 2017).

Gender Expression: How someone chooses to display or express their gender. This may involve a combination of clothing, hairstyles, mannerisms, behaviours, and more (not always based on socially defined characteristics).

Gender-fluid: Someone who does not fall into the categories of ‘man’ or ‘woman’ or has a fluid or unfixed gender identity.

Gender Identity: The way an individual perceives themselves and identifies with regards to gender. This may or may not be similar to their sex assigned at birth. It’s a person’s sense of being a woman, a man, both, neither or anywhere on the gender spectrum.

Heterosexism:  The assumption that all people are or should be heterosexual. Heterosexism excludes the needs, concerns, and life experiences of lesbian, gay, bisexual and queer people while it gives advantages to heterosexual people. It is often a subtle form of oppression, which reinforces realities of silence and invisibility.

Homophobia:  The irrational hatred of LGBTQ+ people. Homophobia includes prejudice, discrimination, harassment, and acts of violence brought on by fear and hatred. It occurs on personal, institutional, and societal levels.

Internalized homophobia: The fear and self-hate of one’s own LGBTQ+ identity that occurs for many individuals who have learned negative ideas about LGBTQ+ people throughout childhood. One form of internalized oppression is the acceptance of the myths and stereotypes applied to the oppressed group

Intersex: Intersex people are born with sex characteristics (including genitals, gonads and chromosomal patterns) that do not fit typical binary notions of male or female bodies. Some intersex persons may be assigned a sex at birth and raised as a girl or boy but may identify with another gender later in life. Some intersex individuals may never know they are intersex, or may not find out until they experience puberty, or later.

Lesbian: An identity for people who are non-men and who are romantically and/or sexually attracted to other non-men.

Non-Binary: A gender identity that embraces a full universe of expressions and ways of being that resonate with an individual. It’s an umbrella term for individuals who don’t identify with the gender binary (the concept that there are only two genders). This term can be used to describe people who identify as agender, bigender, genderqueer, gender-fluid, etc.

Pansexual: Someone who is romantically and/or sexually attracted to people of all different genders.

Queer: An umbrella term used proudly by some people to identify themselves as members of the lesbian, gay, bi, and/or trans communities or cultures. However, it’s important to note that ‘queer’ has been historically used, and continues to be used as a slur, particularly when coming from those outside LGBTQ_+ communities.

Questioning: A period where a person explores their own sexual and/or gender identity, reflecting on such things as upbringing, expectations from others, and inner landscape. The individual may not be certain if they are gay, lesbian, bisexual, or trans and may be trying to figure out how to identify themselves.

Romantic orientation: Who someone is romantically attracted to.

Sex Assigned at Birth: A categorization based on the appearance of the genitalia at birth.

Sex: A categorization based on a combination of many different factors, including, but not limited to internal and external genitalia, chromosomes, hormones, and secondary sexual characteristics.

Transgender: An adjective used to refer to someone whose gender identity does not correspond with their sex assigned at birth. For example: someone who was assigned male at birth and is non-binary.

Two-Spirit: Two Spirit is meant to be an umbrella term that points to the important roles that Two Spirit people held prior to colonization; however, as an umbrella term, specific teachings, roles, meanings, and language must come from the community.

PRONOUNS: What are they and why they are important.

Respect starts with inclusive language. Pronouns are important because language, whether written or verbal, can have a profound impact on individuals and communities. As individuals we convey our respect and help others to recognize who we are referencing when we accurately use a person’s pronouns to refer to them.

You may be familiar with the pronouns he/him/his and she/her/hers, and even they/them/theirs. However, people may use a combination of these pronouns, or other pronouns that are not included here.

What exactly do She/They and He/They pronouns mean?

People that use these pronouns are comfortable with individuals using both she and they, or he and they pronouns when speaking about or to them.

How do I find out someone’s pronouns?

Never be afraid to directly ask “what pronouns do you use” because it’s best to avoid making assumptions about what someone’s pronouns are based on how they might present. It’s also becoming more common for people to add their pronouns in their social media handles and profiles, so consider giving their Instagram or LinkedIn a peak.

What if I accidently use the wrong pronoun for someone?

It’s important to remember that mistakes happen and it’s totally normal for you to mess up while you’re getting used to something new. But ensure that you keep these things in mind:

Tips on how to use language appropriately:

Thank you for embarking on this journey with us to grow the game of hockey and striving towards creating a more inclusive environment.