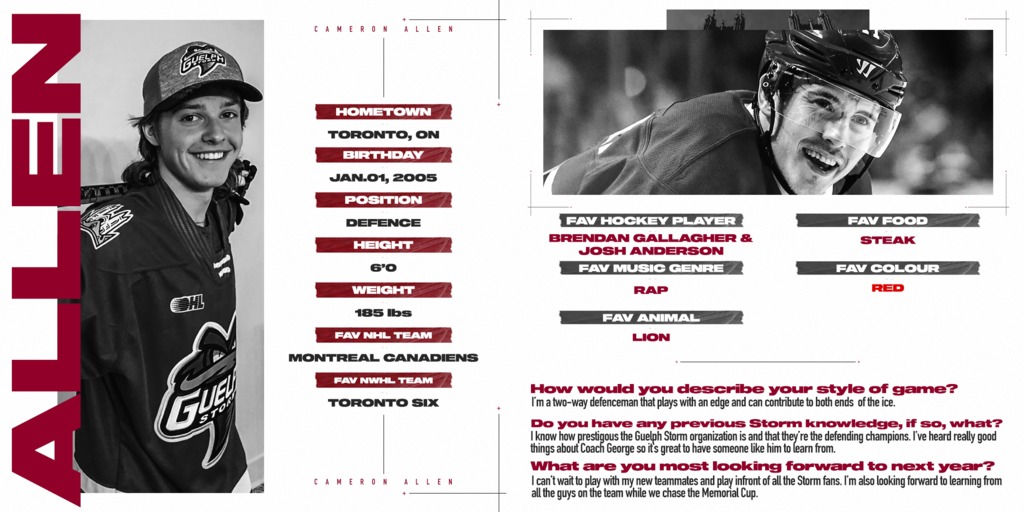 Meet Storm City commit Cameron Allen! 🌪
Most recently playing for the GTHL Toronto Nationals, Allen was selected third overall by Guelph during the 2021 OHL Priority Selection.
Describing himself as a two-way defenceman, Cameron plays with an edge and contributes at both ends of the ice.

There’s a bit of confusion about Allen because his stats seem to be targeted towards a kid from Sudbury. But it’s the Nationals player that you need to take notice of. Prototypical offensive defenseman. He’ll rush the puck up a few times a game and in the vein of someone like Jamie Drysdale, Allen has the speed and awareness after the play to get back into position without costing his team – especially noteworthy at a level where some forwards might not think to rush back to the blueline. Really competitive kid, strong on the puck. When he’s on the top of his game, Allen makes life miserable by sending you towards the boards and taking your high-danger opportunities away. You can hear him talking to his teammates a lot on any given shift – he sees things well on the transition. If I’m comparing him to other recent high-caliber offensive d-men from the OHL – Ryan Merkley, Brandt Clarke and Jamie Drysdale – I’d rank Allen fourth because he gets lost without the puck a little too much for my liking, but he’s got a more physical edge to him. I think with the right coaches around him, his true capabilities will be unlocked.