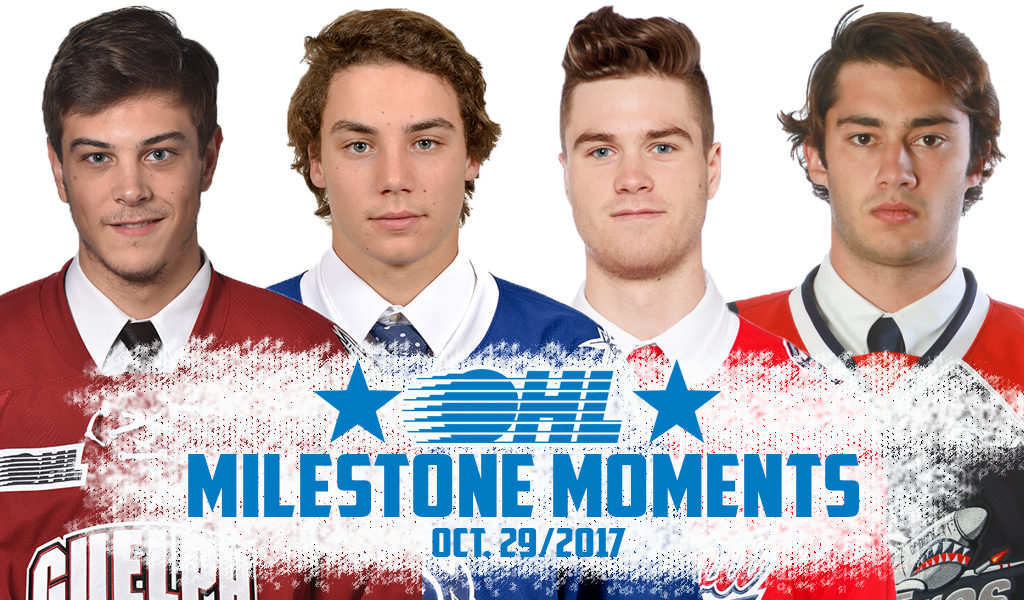 Anthony Popovich’s first career OHL shutout joined first goals by Nicholas Canade, Ian Blacker and Thomas Stevenson as Milestone Moments to round out a busy weekend in the OHL. Here’s a closer look at those accomplishments.

ANTHONY POPOVICH (GUELPH STORM):
Eighteen-year-old sophomore netminder Anthony Popovich stole the show on Sunday, turning aside all 37 shots he faced to earn first star honours in a 4-0 home ice win over the London Knights. The Belleville, Ont. native improves to 7-5-0-1 on the season with a 2.69 goals-against average and a .921 save percentage over 13 contests. Popovich was Guelph’s seventh round pick in the 2015 OHL Priority Selection.

NICHOLAS CANADE (MISSISSAUGA STEELHEADS):
Nicholas Canade didn’t give up on what appeared to be a broken play, coming back to swipe a loose puck over the goal line for his first career OHL goal. Trent Fox drew an assist on the two-on-one marker as Canade opened the scoring in what was an eventual 4-1 Steelheads victory over the Niagara IceDogs. Canada had six shots in Sunday’s contest, finding the back of the net in his 14th game of the season. The 17-year-old hometown product was chosen by the Steelheads in the 11th round of the 2016 OHL Priority Selection.

IAN BLACKER (OSHAWA GENERALS):
Call it a hot start for Ian Blacker. The 18-year-old scored his first career OHL goal in his first game of the season after recovering from injury to help the Oshawa Generals defeat the Ottawa 67’s 4-3 at home. The Oakville, Ont. native appeared in 41 games as a rookie between London and Oshawa last season. The 6-foot-4 rearguard was a fourth round pick in the 2015 OHL Priority Selection.

THOMAS STEVENSON (WINDSOR SPITFIRES):
Eighteen-year-old first year defenceman Thomas Stevenson scored his first career OHL goal in Owen Sound on Sunday, beating Attack netminder Zack Bowman on a slapshot from the blue line. The Orleans, Ont. native helped the Spits defeat the Attack 5-4 and improve to 9-5-1-0 on the campaign. Stevenson was a 10th round pick in 2015 and is a graduate of the Ottawa Jr. 67’s Minor Midget program.