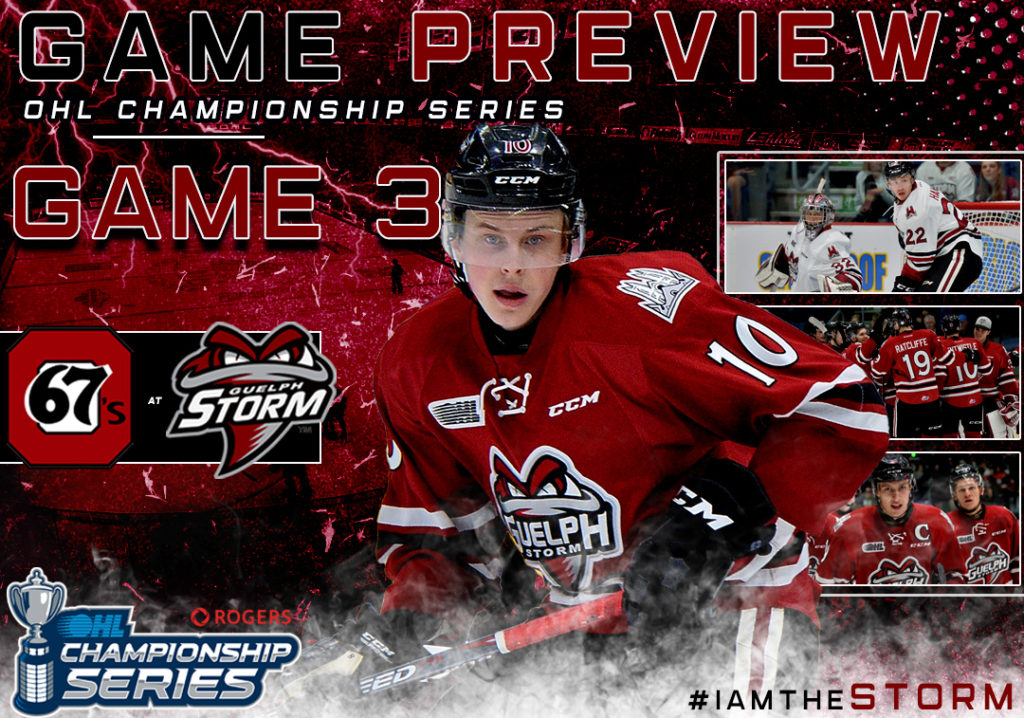 Game 3 of the OHL Championship goes Monday evening at 7:00pm at the Sleeman Centre as the Guelph Storm and the Ottawa 67’s face-off in Guelph.

Game 1 of the OHL Championship started with Ottawa jumping out to a 3-0 lead before the Storm were able to close the gap by scoring 2 consecutive goals. The 67’s would end up taking a 4-2 lead into the 3rd period before Ottawa scored 3 consecutive power play goals on a 5 minute boarding penalty by Fedor Gordeev to give Ottawa a 7-2 win.

Game 2 of the OHL Championship started with the Guelph Storm taking a 2-0 lead before Austen Keating scored a late power play goal to make the score 2-1 Guelph heading into the 2nd period. In the 2nd, Ottawa scored 3 straight goals to give them a 4-2 lead heading into the final period, where Alexei Toropchenko scored to bring Guelph within one. Ottawa would hold on to win game 2 and take a 2-0 series lead heading back to Guelph for games 3 and 4.

Liam Hawel had a great regular season for the Guelph Storm after scoring a career high 37 goals and 41 assists for 78 points. In the post-season, Liam scored 5 points in the opening 4 game series against the Kitchener Rangers, but has only scored 5 more points in the last 16 games.

Austen Keating had a fantastic regular season for the 67’s after scoring 22 goals and career high 67 assists for 89 points. In the post-season, Austen has 2 goals and 11 assists for 13 points in 14 playoff games for Ottawa.