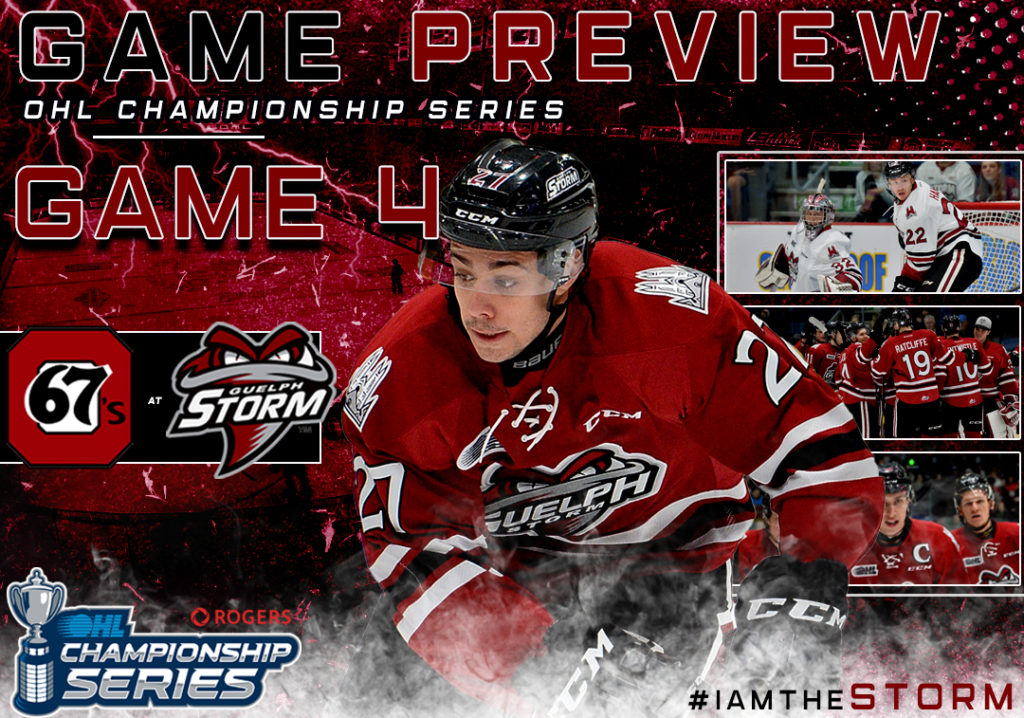 The Guelph Storm and the Ottawa 67’s play game 4 of the OHL Championship series on Wednesday evening at 7:00pm at the Sleeman Centre.

The Ottawa 67’s won game 1 of the series 7-2 after scoring 3 consecutive power play goals in the 3rd period to take a 1-0 series lead. In game 2, the Storm jumped out to a 2-0 lead before Ottawa scored 4 consecutive goals to win the game 4-3 and take a 2-0 series lead heading into game 3 in Guelph.

In game 3, the Guelph Storm and the Ottawa 67’s exchanged early 1st period goals before the Storm added a couple to take a 3-1 lead. Graeme Clarke scored early in the 2nd period to bring the game within one goal until Alexey Toropchenko scored to give the Storm a 4-2 lead heading into the 3rd period. In the 3rd, Guelph blew the game wide open by scoring 3 consecutive goals to give them a 7-2 win and their first win of the series.

Alexey Toropchenko has had a strong OHL Championship series for the Storm, collecting 4 goals in his last two games giving him 10 goals and 15 points this post-season. Toropchenko was drafted by the St. Louis Blues in 2017 and was signed earlier this year after scoring 17 goals and 26 assists for 43 points during the regular season.

Lucas Chiodo was acquired by the 67’s earlier this year and scored 29 points in 28 games for Ottawa bringing his regular season total to 79 points. During the post-season, Lucas has scored 8 goals and added 17 assists for 25 points including 4 points against the Storm in the Championship series.