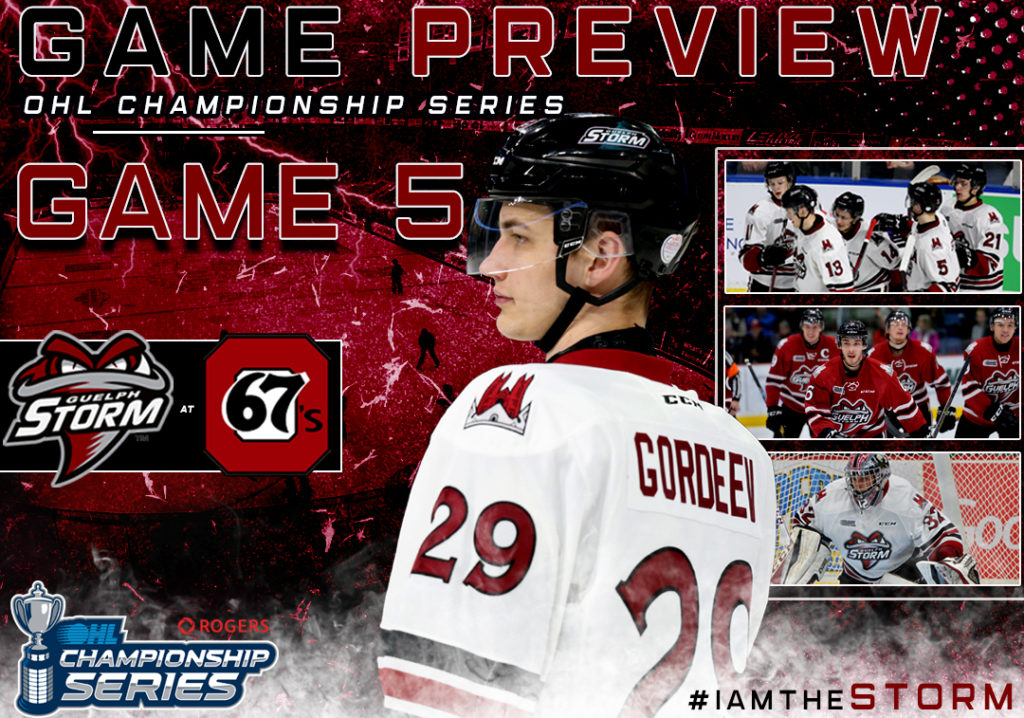 Game 5 of the OHL Championship between the Guelph Storm and the Ottawa 67’s goes Friday evening at 7:00pm at TD Place Arena.

The Ottawa 67’s won game 1 of the OHL Championship 7-2 after scoring 3 consecutive power play goals to take a 1-0 series lead against the Guelph Storm. In game 2, Guelph led 2-0 before the 67’s scored 4 consecutive goals to take a 4-2 lead before Alexey Toropchenko scored to bring the Storm within one goal. Ottawa would hold on to win the game 4-3 and take a 2-0 series lead heading to Guelph for game 3.

Game 4 started with the 67’s scoring on their first shot of the game and were outshooting the Storm 8-1 until Nate Schnarr scored on the power play to tie the game at 1. Shortly after, Alexey Toropchenko would score to give the Storm a 2-1 lead heading into the 2nd period, where Toropchenko would score his second of the night to give the Storm a 3-1 lead. Nick Suzuki would score to make the game 4-1 Guelph before Lucas Chiodo would score a late goal to cut the deficit to 4-2 heading into the 3rd period. Early in the period, Liam Hawel scored on the power play to give Guelph a 5-2 lead, but Ottawa would make the game close by scoring two late goals to make the game within one. However, that is as close as the 67’s would get, and the Storm would win the game 5-4 and tie the series 2-2 heading back to Ottawa for game 5.

Pavel Gogolev was acquired by the Guelph Storm in a trade with the Peterborough Petes and only played 8 games during the regular season for the Storm because of an injury. Pavel collected 9 points with Guelph and finished the season with 28 points in 37 games played during the regular season. In the playoffs, Gogolev has scored 3 goals and added 7 assists for 10 points and has a +/- of 8 heading into game 5 of the OHL Championship against Ottawa.

Kyle Maksimovich was traded to the Ottawa 67’s earlier this season and collected 25 points in 28 games for Ottawa to bring his season total to 81 points in 67 games played. In the playoffs, Kyle has 8 goals and 14 assists for 22 points in 14 games played including 2 goals and 1 assist against the Guelph Storm in the OHL Championship series.