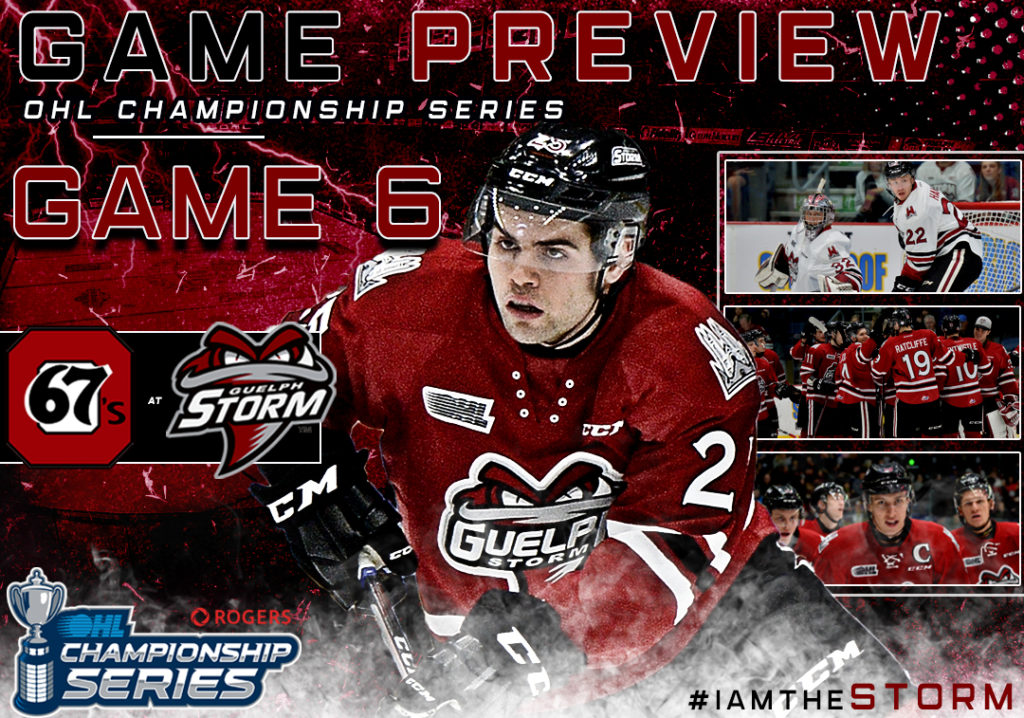 Game 6 of the OHL Championship series between the Guelph Storm and the Ottawa 67’s goes Sunday afternoon at 2:00pm at the Sleeman Centre as Guelph looks to win their fourth OHL Championship in Storm history.

The 67’s won game 1 against the Storm 7-2 after scoring 3 consecutive power play goals in the 3rd period to give them a 1-0 series lead.

Game 3 in Guelph belonged to the Storm as they dominated the 67’s and won the game 7-2 and won their first game of the OHL Finals.

In game 4, Ottawa jumped out to an early 1-0 lead before the Storm scored 4 consecutive goals to give them a 4-2 lead heading into the 3rd period. In the 3rd, Liam Hawel scored to give the Storm a 3 goal lead before Ottawa made things interesting by scoring 2 late goals to bring the game within one. But, that was as close as the 67’s would get as the Storm held on to a 5-4 win and tied the best of 7 series 2-2.

Game 5 in Ottawa was a fast paced back and forth game as Ottawa took a 1-0 lead half way through the 1st period before Cedric Ralph and Isaac Ratcliffe scored for Guelph to give the Storm a 2-1 lead heading into the 2nd period. Early in the 2nd, Alexey Toropchenko scored to give Guelph a 3-1 lead, but a couple minutes later Sasha Chmelevski scored his 11th of the playoffs to bring the game within one goal. Nate Schnarr finished off a great pass from Liam Hawel half way through the period to give Guelph a 2 goal lead heading into the final period of action. In the 3rd, Ottawa dominated and outshot the Storm 13-5 and Tye Felhaber scored his second of the game to bring Ottawa within one goal again. Anthony Popovich was fantastic in the final 5 minutes of the 3rd period and the Guelph Storm were able to hold on to a 4-3 win and take a 3-2 series lead back to Guelph for game 6.

Kevin Bahl finished his 3rd OHL regular season with a career high 6 goals and 28 assists for 34 points and had an impressive +/- of 50 in 68 games for Ottawa. In the post-season, Kevin has scored 1 goal and added 9 assists for 10 points in 14 games and has a strong +/- of 12 heading into game 6 of the OHL Finals.