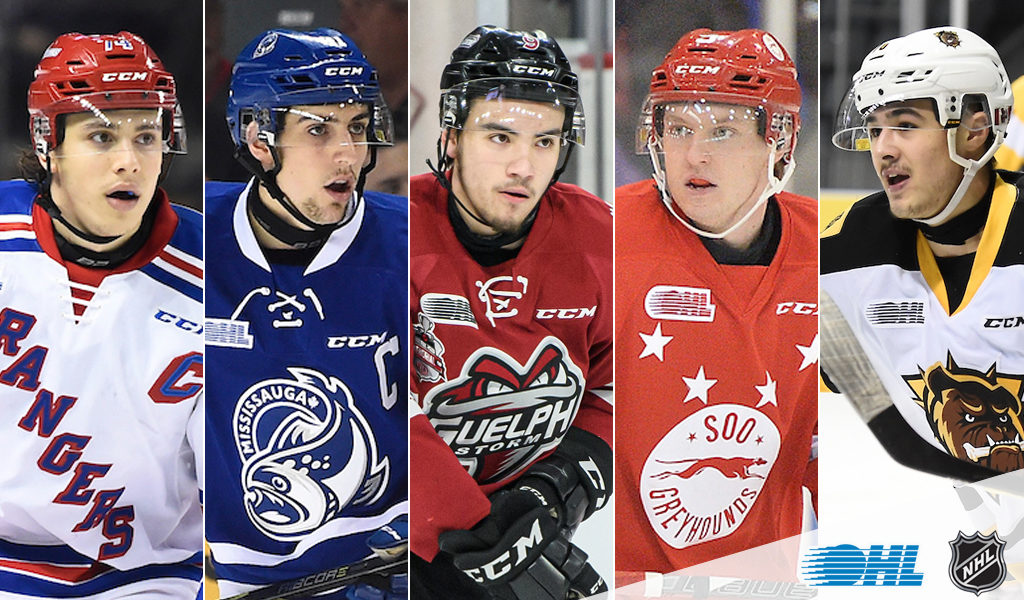 Nine OHL graduates both recent and a few after some time in the minor pro ranks have made their NHL debuts as the 2019-20 season has gotten underway.

Here’s a glimpse into the first few games of their NHL careers and a snapshot of the path it took to get there.

The Guelph, Ont. native made his NHL debut on Oct. 4th against the Chicago Blackhawks.

The 21-year-old from Ancaster, Ont. graduated as an OHL champion with the Hamilton Bulldogs in 2018 and was also a member of the last Plymouth Whalers club to compete in the league. Caamano also performed well in his time with the Flint Firebirds, scoring 35 goals in the 2016-17 season. He put up 36 points (13-13–26) over 41 games with the AHL’s Texas Stars last season.

Caamano made his NHL debut on Oct. 5th against the St. Louis Blues. He scored his first career NHL goal on Tuesday against the Washington Capitals.

Hague enjoyed a productive OHL career with the Mississauga Steelheads, setting a single season franchise record with 35 goals by a blueliner during the 2017-18 season as he earned OHL Defenceman of the Year honours. Also a former Bobby Smith Trophy recipient as OHL Scholastic Player of the Year, Hague helped the Steelheads win an Eastern Conference title in 2017. He recorded 32 points (13-19–32) over 75 games with the AHL’s Chicago Wolves last season, helping them reach the Calder Cup Final.

Hague made his NHL debut on Oct. 4th against the San Jose Sharks.

Dominik Kubalik, Chicago Blackhawks – Sudbury/Kitchener – 2012-14
After five years of pro hockey in the Czech Republic and Switzerland, Dominik Kubalik has made his NHL debut.

The former Sudbury Wolves and Kitchener Rangers winger spent three seasons in the OHL before turning pro in his native Czech Republic. He’d been a seventh round pick of the Los Angeles Kings in the 2013 NHL Draft and was acquired by the Blackhawks for a draft pick this past January. Last season, the 6-foot-2 left-winger recorded 57 points (25-32–57) over 50 games with the Swiss Elite League’s Ambri-Piotta squad.

Kubalik made his NHL debut on Oct. 4th against the Philadelphia Flyers, doing so before family and friends in his native Czech Republic.

“Our dream was for him to play in the NHL and I am really proud we can be here for the first game. We are so happy we made it here.”

Several family members were on hand for Dominik Kubalik’s NHL debut in Prague, just 30 miles away from his hometown. https://t.co/u5URdyaHk0

The 27-year-old native of Orleans, Ont. signed as an undrafted free agent with the Oshawa Generals back in 2009-10, developing to score 30 goals in his final OHL season in 2012-13. Sabourin earned himself a minor league deal with the Los Angeles Kings’ affiliate in Manchester, NH. He put up eight point (4-4–8) over 43 games with the Calgary Flames’ AHL affiliate, the Stockton Heat, last season. He signed as a free agent with the Senators out of training camp.

Sabourin scored in his NHL debut on Oct. 2nd in Toronto.

Scott Sabourin (27 years, 64 days) is the oldest player in @Senators history to score a goal in his NHL debut.

Rasmus Sandin, Toronto Maple Leafs – Soo Greyhounds – 2018-19
Swedish blueliner Rasmus Sandin has made the jump to the NHL after one season in the American Hockey League.

Sandin played one season with the Soo Greyhounds in 2017-18, helping them win a Western Conference title before being selected with the 29th overall pick of the 2018 NHL Draft by Toronto. He impressed with 28 points (6-22–28) over 44 regular season games with the AHL’s Toronto Marlies last year.

Sandin recorded his first career NHL point with an assist in his debut on Oct. 2nd against the Ottawa Senators.

The 20-year-old from London, Ont. recorded 328 points (141-187–328) over his four-year OHL career between Owen Sound and Guelph, capping it all off with an OHL Championship last spring. The former 13th overall pick by the Vegas Golden Knights in the 2017 NHL Draft was dealt to Montreal in a January 2019 deal that saw star Max Pacioretty go the other way.

Suzuki made his NHL debut on Oct. 3rd against the Carolina Hurricanes.

Nick Suzuki, you’re up next!

Timmins, who battled injuries at various points of his OHL career, was a second round pick of Colorado in the 2017 NHL Draft. Originally a fourth round pick by the Hounds in 2014, Timmins developed into a solid two-way rearguard, posting 115 points (19-96–115) over 163 regular season games. He helped the Hounds win a Western Conference title in 2018.

Timmins made his NHL debut on Oct. 3rd against the Calgary Flames.

Conor Timmins has been waiting for tonight for a long time.

The 24-year-old from Waterdown, Ont. won an Eastern Conference title with the IceDogs as a rookie in 2012, going on to produce 224 points (83-141–224) over 262 regular season games in Niagara. He was a third round pick of the Toronto Maple Leafs in 2013 before being dealt twice, landing with the New York Islanders before being acquired by Tampa Bay.

Verhaeghe made his NHL debut on Oct. 3rd against the Florida Panthers. He picked up his first NHL point with an assist on Oct. 5th against Florida.