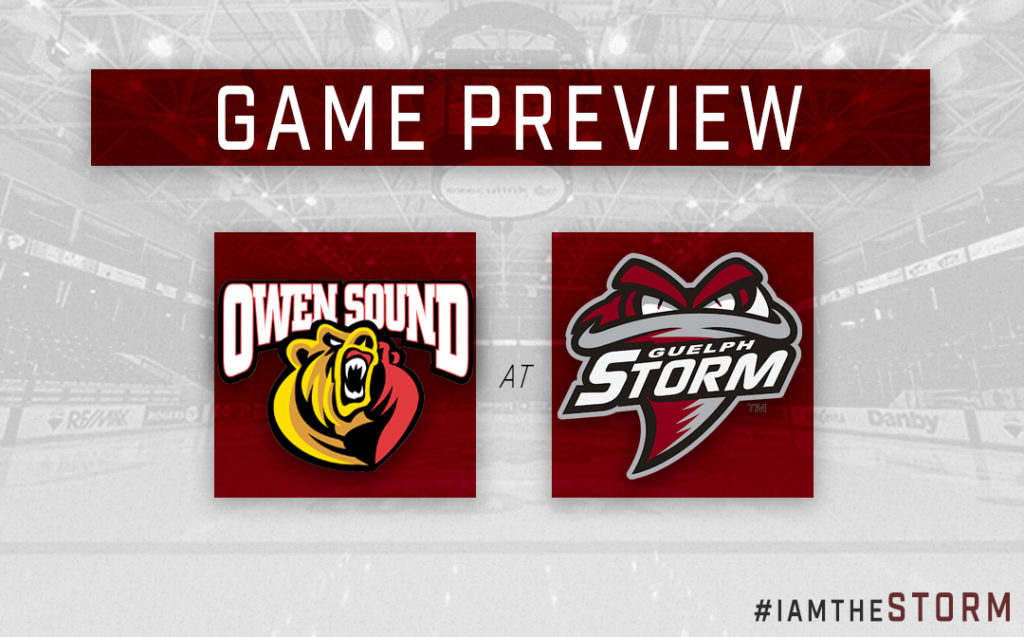 The Guelph Storm welcome the Owen Sound Attack to the Sleeman Centre on Friday evening at 7:30pm for their first meeting of the season and the first game of a back to back between the two teams.

Owen Sound also lost their home opener to the 67’s in a shootout that saw rookie Ethan Burroughs get a pair of assists and rookie Stepan Machacek scoring his first career OHL goal. The Attack won their first game of the season against Barrie on Thursday evening by outscoring the Colts 10-0, with Sergey Popov scoring 6 points and Aidan Dudas adding 5 points.

This season, the Storm will begin their rebuild, as they have half of their former roster moving on from junior hockey, which will lead to an increase in rookie skaters in the lineup. Newly drafted players in the lineup include Danny Zhilkin (1stRound), Andrei Bakanov (1stRound – Import Draft), Jacob Maillet (2ndRound), Marko Sikic (3rdRound), Cooper Walker (5thRound), Clark Hiebert (9thRound – 2017) and Owen Bennett (4thRound – 2018). Also, forwards Ben McFarlane and Matthew Papais and defencemen Luka Profaca return to the Storm lineup after playing some games last season with the Storm. Defencemen Colin Campbell made the roster as a free agent and Eric Uba joins the Storm via trade with Flint. The newest member, overage defenceman Josh Wainman will make his Storm debut tonight.

Pavel Gogolev scored 1 goal and 1 assist in the home opener against the Ottawa 67’s last Friday. Pavel was brought over from Peterborough last season in a trade for Ryan Merkley and finished with 9 points in 8 regular season games before getting injured. Gogolev added 10 points in Guelph’s Championship playoff run and will be relied upon being a leader on this young Guelph Storm team.

Aidan Dudas a L.A. Kings prospect led the Attack in scoring last season with 26 goals and 62 points and added 4 more points in the playoffs. Aidan was drafted in the 1stround of the 2016 OHL draft by Owen Sound and will look to lead the Attack into the post-season once again.

The Storm will play in Owen Sound on Saturday evening at 7:30pm to wrap up the home and home against the Attack. Guelph plays at home next Friday October 4thas the Flint Firebirds visit the Sleeman Centre before the Storm head to Sarnia on Sunday October 6th.