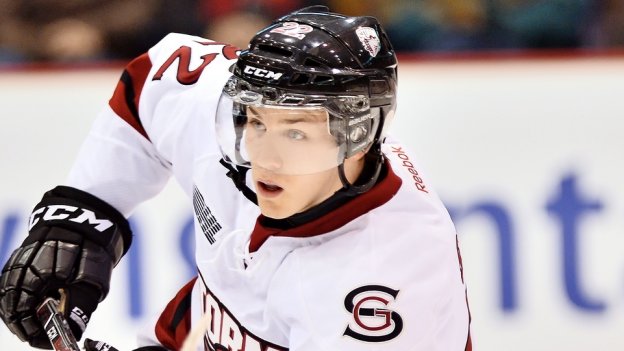 Former Storm forward and 2014 OHL Champion Pius Suter signed with the Blackhawks in the off season and has impressed at camp so far.

The Hawks’ lines in practice Saturday were pretty close to what they’ll be for the season opener, and Suter — the team’s newest European import — remained in a notable top-nine role.

Blackhawks assistant Marc Crawford is the czar of training camp. Coach Jeremy Colliton technically is his boss, but it’s Crawford who coordinates many of the drills Hawks players skate through each day.

And forward Pius Suter is thankful for that.

Suter, the Swiss league’s leading scorer last season and the latest overage European import the Hawks wooed across the Atlantic, came to Chicago knowing nothing about his new home and practically no one in the organization. He has resorted to taking walks around Chicago — yes, in January — to get accustomed to his new city.

But he knows Crawford very well. The well-traveled coach was in his fourth and final season coaching Zurich SC when Suter joined the team as a rookie in 2015-16, and Crawford played a pivotal role in launching Suter’s career as one of Switzerland’s biggest hockey stars.