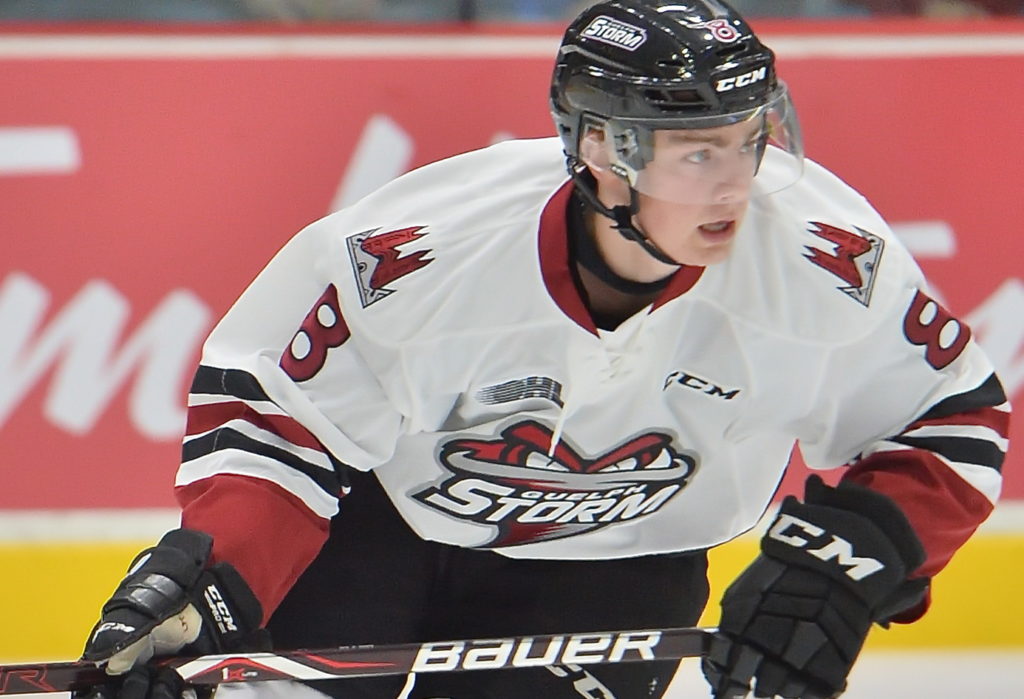 It didn’t take long for Cam Hillis to make an impression on the Royal City.

Selected in the second round (29thoverall) of the 2016 OHL Priority Selection, Hillis had already committed to play NCAA hockey when the time came.

“Making the commitment to come here, going against the grain of what everyone was telling me to do…” Hillis said of his biggest challenge to date. “To kind of take that leap of faith and trust yourself in coming here… it was tough, but I think it worked out pretty well for me, I’d say.”

Recording 59 points (20 goals, 39 assists) in 60 games, only to cap off the rookie campaign by becoming a Montreal Canadiens prospect at the 2018 NHL Entry Draft is certainly pretty well, to say the least.

“It was a huge honour,” the five-foot-11, 163-pound centre said of being selected in the third round (66thoverall) by the Canadiens. “It’s an opportunity that comes around once in a lifetime… being able to share that moment with my friends and family was very special for me, and to be picked by Montreal – an original six team – you know, a very storied organization, is incredible to me.”

As for the destination, was Montreal a surprise?

“Not really… I knew where I was supposed to be picked and they had a few picks around then, and I talked to them a couple times during the year but, I didn’t really know,” Hillis explained, adding some advice. “What I knew going into the weekend was the last team you expect to be picked by, is going to pick you.”

Putting on the red jersey for the first time though, was the most memorable part of the weekend for the Enniskillen, Ontario native, but also who he was able to share that moment with.

“Sharing that moment with my family – they’ve been through everything with me and helped me along the way since the very start of my hockey career… so to share it with them, was amazing.”

Now, looking back, advice that rang true through one of the greatest accomplishments of Hillis’ hockey career, continues through to his second season with the Storm.

“Don’t get too worked up about [the draft] – it doesn’t matter when you go, it’s where you go,” he said. “Just know that the hard work starts now, to take it with a grain of sale, and to work as hard as you can.”

For those who have watched the quick No. 8 for just a little over a season now, know hard work spews from his game – along with obvious intensity and passion, traits that sometimes catch up to the 18-year-old.

“Along with humility and being humble, it’s don’t take everything so seriously – go back to why you play the game, to have fun with it,” Hillis said of the biggest lesson he’s learned. “Your talent brought you this far, but obviously your passion for the game too – just not getting too obsessed with it, enjoy it, and make sure you’re always having fun with it.”

With that, Hillis recognizes his proudest accomplishment stands within himself.

“Probably the person I’ve become,” he said of what he’s most proud of to this point. “Hockey’s taught me a lot on the ice and off the ice, but how to deal with different situations, and just how I’ve grown into the person I am today.”

There is no hesitation when it comes to handing out thanks for that, either.

“Definitely my parents – they’ve been through it all,” Hillis said of his mom and dad, Sally and George. “They’ve always been a huge help and support, they’ve helped me get to this very point.”

To this very point – a point that took a few unexpected and unplanned turns, all met with a year filled with big moments.

Are there any regrets?