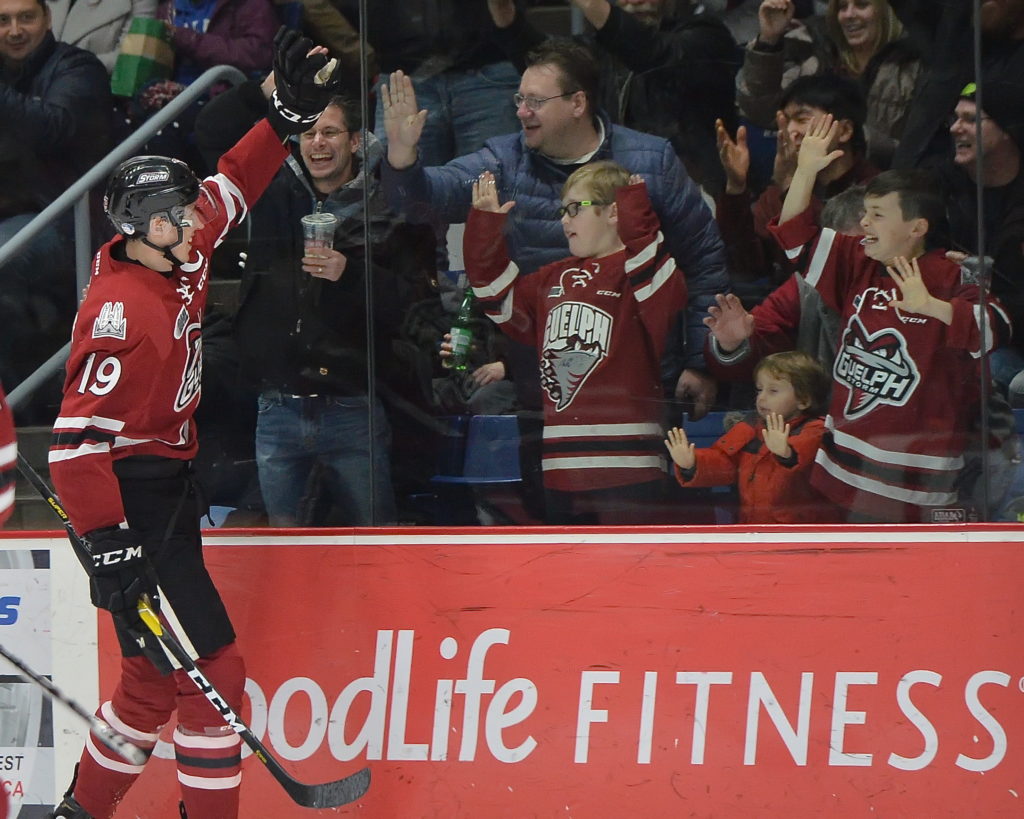 A lot has changed for Isaac Ratcliffe.

Starting with the ‘C’ on his jersey straight through to coming into the 2018-19 Season as the Guelph Storm’s MVP following his 41-goal campaign last year – a slight difference from the 13-point season tallied as a rookie back in 2015-16.

But, as the team developed alongside the former 2015 first round selection, the new Storm captain hasn’t changed much of himself.

“It was pretty surreal,” Ratcliffe said of the captaincy honour, highlighting the humble and grateful attitude that has followed No.19 around since the start. “Following in [Garrett McFadden’s] footsteps, I saw how he carried himself on and off the ice, and in the community – that was my goal, to continue how he used to lead this team and how he used to be as a person… It made it a lot easier to transition into this role.”

A transition that Ratcliffe never really thought about until becoming the organization’s newest captain was a reality.

“I think when I first got here, it was a transition,” the six-foot-six, 204-pound forward explained of his start with the Storm, adding that Guelph has now become his second home. “I had a lot of guys before me that made it easier for me, so I’ve just taken what I’ve learned in the past three years and tried to move myself forward.”

“It helped me, help other players too, and that was my main goal this year… trying to make everyone feel comfortable, and I think that’s going to be the best part about hopefully leading this team to a Memorial Cup Championship,” Ratcliffe continued.

Getting to this point, though, leaves Ratcliffe quick to remember two familiar names.

“[McFadden] has taught me a lot from his career,” the Philadelphia Flyers prospect explained. “He’s seen it all, and he’s given me a lot of advice… he pushed me forward, showed me how to be a leader, and how to carry myself.”

“Luca Caputi,” Ratcliffe said, following with the former Storm assistant coach. “He took me under his wing in my first year, and it was his first year in the league too, but he was a guy who knew the right decisions from the wrong decisions, and really helped me.”

“[McFadden and Caputi] guided the way for me not only as a player, but as a person, and I think that goes a long way.”

With that support, Ratcliffe looks back with only one piece of advice for his 16-year-old self.

“I’d tell myself things can only go up from here,” the London, Ontario native said. “We started off as a really young team and struggled, and it’s hard to go to the rink every day with a big smile on your face, but the biggest thing is to just keep working, do what you can to move yourself forward, keep a strong head on your shoulders no matter the type of situation you’re in, and hopefully others follow behind you.”

Of course, beyond the rink, Ratcliffe is quick to praise parents Elaine and Al Ratcliffe.

“They sacrificed so much for me – I grew up with two older brothers, a half-brother and a half-sister, so they had a lot on their plate, whether it was with work or whatever was going on,” he said. “They always let me keep my dream my own, while pushing me each day to not only be a better hockey player, but a better person too.”

Now with a couple of Flyers’ Development camps, Rookie camps, and time spent at main camp this past September, Ratcliffe’s appreciation for everything he’s not only experienced, but has the opportunity to accomplish, remains obvious.

“I wouldn’t even say I’m proud – I’m lucky and I’m happy that I’ve been able to maintain the same goal and the same dream, and it hasn’t faded at all over the years,” Ratcliffe said. “My dream is to play in the NHL and one day win a Stanley Cup… that’s obviously a lot of kids’ dreams, but I think it’s pretty exciting that I get to go to the rink every day and have that opportunity to push myself and continue to try to make this dream a reality.”