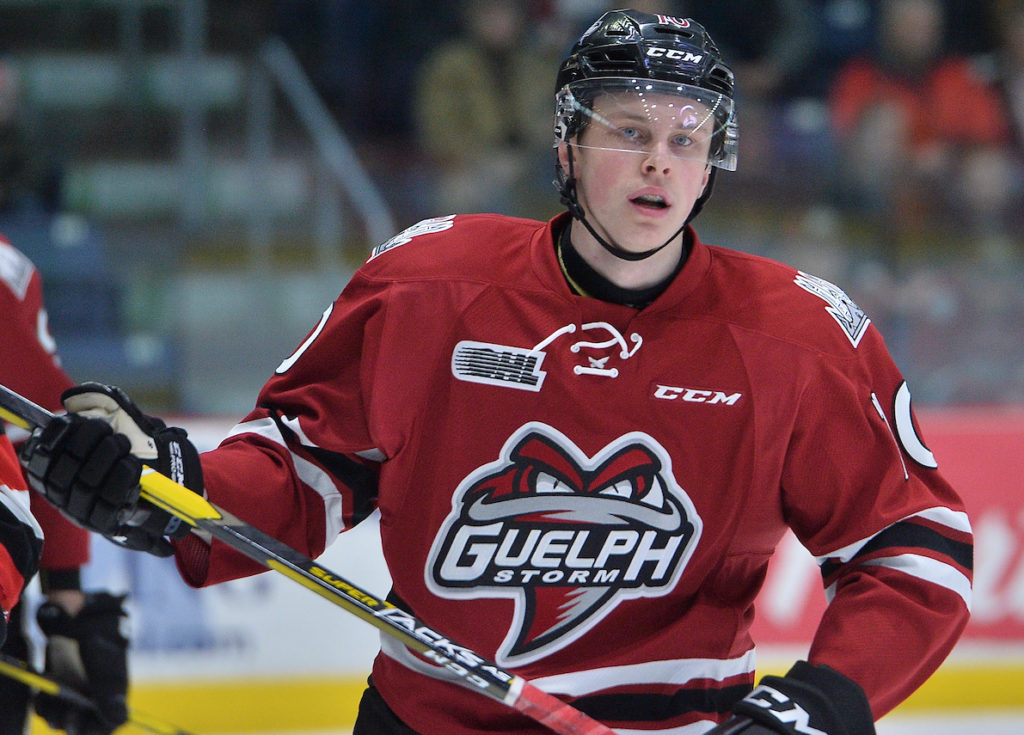 There’s a cul-de-sac in Georgetown, Ontario that deserves some praise from the hockey world.

“[It] had a whole bunch of hockey and lacrosse players that are now playing pro at their respective sports,” Guelph Storm forward MacKenzie Entwistle said of his introduction to hockey, adding that his dad is from England – and a big soccer fan. “I tried [soccer] and didn’t really like it as a kid… but the guys on my street, they actually got me into playing at a young age and then it took off from there… I loved it.”

Entwistle, who started skating at the age of three and jumped into playing on a team at four-years-old, then moved through his minor hockey years straight into what has undoubtedly been a whirlwind of an OHL career.

“It’s been kinda’ like a roller coaster, but it’s been a good few years in this league,” the four-year-OHL veteran reflected, starting off as a Hamilton Bulldogs draft pick (by then coach and General Manager George Burnett) on a young, developing team, to fast forwarding through to an OHL Championship in 2017-18.

“It was probably the most fun year of hockey that I’ve ever had,” the 1999-born forward explained of the championship campaign. “We had a lot of guys that went on to play pro and I still talk to every single one of them… that’s just how close we got. It’s the time and effort that you put in, and to finally win that championship… it’s something that I’ll never forget.”

Less than a year removed from the championship, Entwistle earned the opportunity to represent Canada at the World Junior Championship in Vancouver / Victoria – crossing off one of his career’s biggest goals.

“It was obviously fun wearing that logo and representing your country,” the Chicago Blackhawks prospect said, adding that even though it wasn’t the desired outcome, it just felt like it wasn’t meant to be. “The series of events… the broken stick, the penalty shots, all of it, but it was a great time, lots of memories, and it’s always crazy walking out in front of 25,000 fans all cheering for you.”

Taking the experience and accomplishment with the right perspective, the six-foot-three, 181-pound winger marks the tournament as one of his proudest moments to date, paired with the OHL Championship in 2018.

“Winning a championship in the OHL is something a lot of kids dreams of, and then a goal of mine was to make that World Junior team,” Entwistle explained. “It was pretty cool when I got to call my parents and tell them the news that I made that team.”

Pride, however, doesn’t come without challenges.

“It was tough one me and even my family,” the former Bulldog said of his career’s biggest challenge: the recent trade to Guelph, adding that it was tough saying bye to his billets, coaches, and all of his teammates. “Even coming to a new atmosphere… it’s like changing jobs, you never know what to expect, but they welcomed me nicely here and now it’s out of the way, but right away it was a culture shock, honestly. It’s been good though, and I’m happy to be here.”

With the highs and the lows, always stands Margaret and Dave Entwistle.

“My parents – I know everyone says that, but I mean it,” Entwistle said of who he thanks the most. “Growing up, driving me to practices, early mornings… I still remember stopping at Tim Hortons every single morning before going to the rink, just little things like that. They were always there for me whenever I needed them.”

Looking ahead now, Entwistle is nothing but excited for the potential of what’s to come.

“We have a pretty special team in the locker room here and that’s what I’m most excited for,” he said, adding that although he doesn’t want to say it’s his last year in the league, playing professional hockey next year isn’t far off the top of the list. “Just to see what happens, to grow, make new friends, and to keep pushing for that second championship and I think we have the team to do it this year.”

“We’ll see what happens, but that’s what I’m most excited for.”