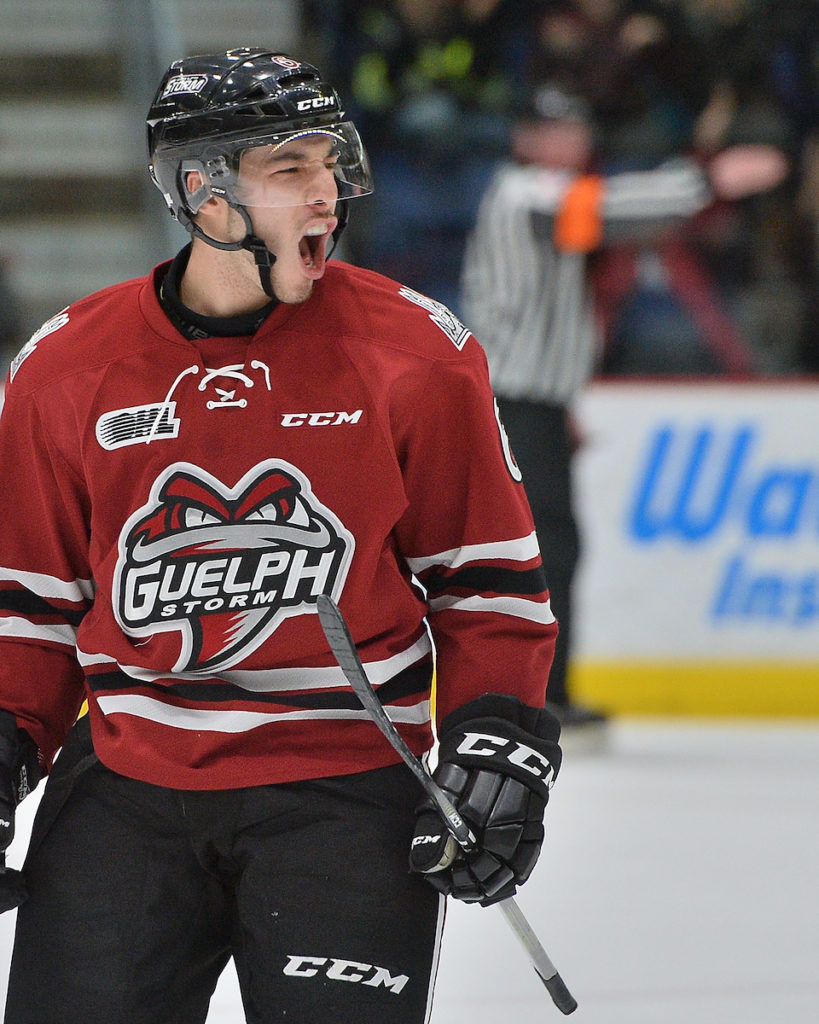 The newest addition to the Guelph Storm blueline stands at six-foot, 187-pounds, matched with a smile and personality just as big. But, perhaps the biggest and brightest thing about Sean Durzi is the very path, and everything in between, that has led him to this point.

Thanks to a mother’s idea and a dad who always liked the game, the now-overage Storm defenceman started skating at the age of five, originally with eyes for goaltending during his Timbit days.

“I wanted to be a goalie,” Durzi recalled. “I think my mom was too stressed out to take on that, so she said no, and I became a defenceman.”

Moving ahead to the 2015-16 season, Durzi’s first in the OHL, where the then rookie was lining up as a forward with the Owen Sound Attack.

“It was the first time I ever played… it was the only way I got into the line-up,” Durzi, a 12th round pick in 2014 explained, offering that making the roster out of camp was a surprise. “My first year was tough… I wasn’t expected to play in the OHL, and it was a last-minute decision to go to camp.”

“I decided to go just to see how I matched up against OHL players,” the Mississauga native continued. “I ended up making the team, so it was a little unexpected for me and my family to move away that year, but I did it.”

The following season, a 17-year-old-turning-18 Durzi settled into a bigger role as a sophomore with the Attack, playing ahead of the 2017 NHL Entry Draft.

“My second year was a little better – went through some tough times, but I had a pretty good year,” Durzi remembered. “I went to the draft [in Chicago] with [Nick Suzuki] and he and five other teammates got picked that year so that was awesome, but I didn’t… it was tough, but I really wasn’t as crushed as a lot of people think – I knew I had a lot to prove and a lot of work to do.”

Flipping the page to the 2017-18 season, the 1998-born defenceman earned a different result at the 2018 NHL Entry Draft, this time hearing his name called by the Toronto Maple Leafs in the second round.

“I had a really good offseason, came back, and started the year off really strong,” Durzi continued, capping it all off with another trip to the draft – this time to Dallas. “I always knew if I got drafted, I’d want to be there – it’s only going to happen once in your career, so I went and got picked… it was scary at the beginning but it was unbelievable.”

With one dream checked off the list, Durzi’s fourth and final OHL season has managed to maintain the unexpected, seeing the 20-year-old traded from two teams in the same month – first moving from Owen Sound to Guelph, followed by the Leafs sending his rights to the Los Angeles Kings a couple weeks later.

“It was a little unexpected to be honest,” Durzi said of the move to Guelph, adding that everything happened so fast. “But it’s been unbelievable and I’m really happy to be here.”

Looking back through it all, the biggest challenge comes as a lesson for the now Kings’ prospect.

“It’s really easy to get on your high horse here, especially when you’re playing well and winning, you feel like you’re on top of the world, but then one bad game, and everything comes tumbling down,” Durzi said. “The toughest thing is realizing that you can’t get too high or too low on anything.”

With that, comes Durzi’s advice to his 16-year-old self.

“From everything I’ve gone through, I think everything happens for a reason… the only thing you can worry about is what you can control,” he said, adding that everything ends up working out in the end and that he’s a better person for it. “I’m most proud of not even the player I’ve become, but the person I’ve become through all the adversity – the injuries, not getting picked, having a tough few years, all of it… I’m proud of it.”

And that person is quick to thank the village who helped him get here.

“My whole family – my parents for always having them to lean on, and my brothers,” Durzi said of younger brothers Ryan and Drew. “A lot of my motivation came from them, competing with them my whole life, and really wanting them to look up to me and to be proud of who I am,”

Now, it’s nothing but excitement for what’s ahead.

“I’m just excited for the rest of the season,” Durzi offered. “I think there’s a lot of expectation from ourselves, but if we focus on what we can control and what we can do, we can have a really special year.”