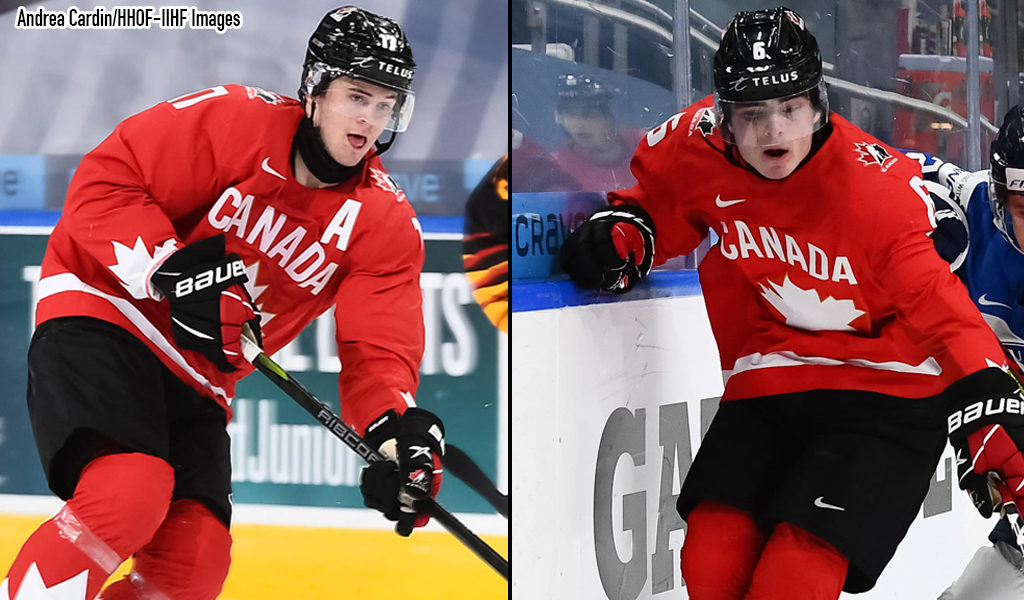 Another Canada-Russia matchup is on the horizon as both teams prepare to face off in Monday’s World Juniors semi-final clash.

Aside from a pre-tournament matchup that ended 1-0 in Canada’s favour, the two countries last met in the 2020 gold medal game a year ago in Ostrava, Czech Republic where the Canadians claimed the top prize following a 4-3 comeback victory.

A speedy, skillful Russian team looking for revenge is to be expected, said Team Canada returnee Connor McMichael, but he has no doubt their undefeated group is up to the task.

“They’re a really fast, skilled team. They have good systems over there, a little bit different from last year, and a really good goalie as well,” said the London Knights forward following Sunday’s practice, pointing out Russian netminder and Nashville Predators first round pick Yaroslav Askarov.

“I think we all know what’s at stake tomorrow. We’re all excited, you just have to control your nerves, stay loose, play your own game. I think if we do that and stick to our systems we’ll be fine. You don’t want to overthink it too much.”

“100% there will be carry-over. We want to maintain where we’re at and we want to obviously come out on top, but in saying that, they’re going to have something to prove because we came on top last year,” explained the Erie Otters defenceman.

Jamie Drysdale and Team Canada are excited for a competitive rivalry game as they prepare to take on Russia in the semi-finals of the #WorldJuniors pic.twitter.com/nHcCVomeGK

Stemming from their pre-exhibition matchup two weeks ago, head coach Andre Tourigny has had a keen eye on this Russian squad, who are coming off a 2-1 quarter-final win over Germany. While Canada came out on top in their pre-tournament tilt, Tourigny nonetheless stressed the need to re-plan ahead of Monday’s game.

“We need to look at what they did against USA, the Swedes and all those good countries so we’ll evaluate that. We have a lot of work done already so we’ll keep working through the day and will have a plan for tomorrow,” said the coach during Sunday’s post-practice media availability.

“They’re a really good team. If you’re in the top four at the World Juniors, you know you’re playing a good team. They’re strong physically, they’re really strong on the puck, they have a good goalie, they have skill, and they skate really well so it will be a good game.”

Having served as an assistant behind the bench during last year’s gold medal run, Tourigny has noticed a very different style of play this time around under the leadership of head coach Igor Larionov, who replaced long-time coach Valeri Bragin behind the Russian bench this past summer.

“It’s day and night. Totally different. Different style, different philosophy, different objective in their game,” said Tourigny of this year’s Russian squad, who posted a 2-1-0-1 record in preliminary play. “They like to possess the puck, they regroup a lot, they have a good stretch on their breakout, they got a few breakaways because of that. They’re still stingy defensively, they are strong on the puck, and they’re fast. They’re a good team.”

Following last year’s gold medal win (and the 6-0 loss that preceded it), Drysdale appears to have a good grasp on his upcoming opponent’s style of play and broke down the differences he’s noticed in this year’s game plan.

“From what I’ve seen, last year they were a run-and-gun team. They’re more patient with the puck, they’re not throwing the puck away, they’re not afraid to take it out of our offensive zone to regroup in the neutral zone. That’s probably the biggest difference, not giving it up. We’ll need to adapt to that and make sure we have a good forecheck, that’ll help us a lot,” said the Anaheim Ducks prospect, who scored the lone goal in that 1-0 exhibition matchup.

Coming off impressive showings in Saturday’s 3-0 quarter-final win over Czech Republic, both skaters spoke to their excitement level heading into tomorrow’s rematch.

It’s such a long rivalry between the two teams, we’re excited for it and can’t wait to get going tomorrow,” said McMichael, who potted a goal in last year’s gold medal finish.

“You always seem to get a good game, there’s a little bit of bad blood between the two countries and I think that that also makes a better game,” Drysdale continued. “The intensity and pace of the game is going to be really good, it always is. Just the competitiveness and the compete. It’s always a good game and really fun to be part of.”

For Tourigny, who is partaking in his seventh Team Canada event, the rivalry is just as special from behind the bench.

“The history between Canada and Russia is well-documented and everyone knows how big of a game that will be,” he said. “There’s nothing bigger than that at this point. ”

The puck drops on Monday’s semi-final tilt at 6pm ET and will be followed up by USA and Finland at 9:30pm ET.