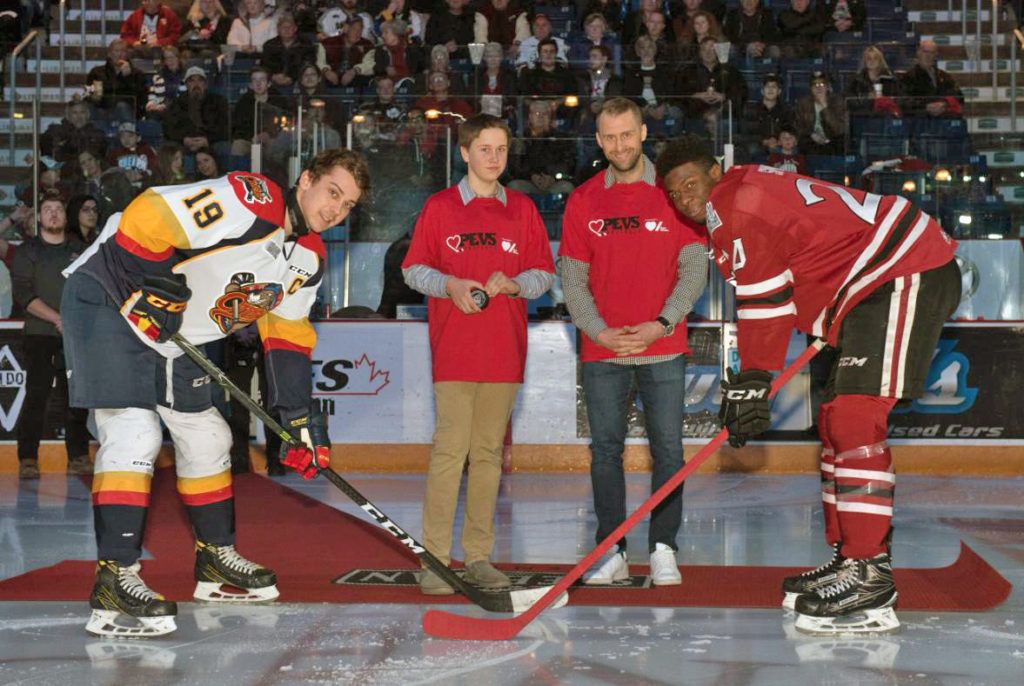 by Amalie Benjamin @AmalieBenjamin / NHL.com Staff Writer – A raw edge bites at Nathalie Peverley’s voice, nearly three years later. Her voice thickens, becomes huskier, as the memories and fears and anxieties rise, once again, to the surface. It has all taken time to process, and still the emotion is palpable.

There was the cardiac arrest that eventually ended Rich Peverley’s hockey career; the surgeries, the workouts that were ultimately in vain; the retirement, the way that life changed completely and irrevocably.

There was the end of something, but there was the beginning, too. And that is where Nathalie’s voice softens, as she blinks back the lurking tears, as she shares her pride.

Two years ago, after conversations with doctors, after reflections on what had happened and where their lives were going, Rich and Nathalie created Pevs Protects, a charity that works to raise funds to purchase automated external defibrillators (AEDs) and to educate and train people of all ages to use those devices.

It works, ultimately, to save lives in the way that Rich Peverley’s was saved.

“It’s been a healing process for our family,” Nathalie said. “Especially for our kids, to look at something that was challenging for us to go through, but also to see what you can do to take a hard situation and make it a good one.

“It could have been way worse. We could have lost Richard. There’s a lot of families out there that reached out to us and they unfortunately lost somebody. I just don’t want a family to have to go through that.”

Their luck — yes, they use that word — came at the time of Rich’s cardiac arrest, which occurred at American Airlines Center in Dallas during a game March 10, 2014, with his Dallas Stars teammates drawing attention to him on the bench and medical personnel on hand and an AED not far away.

The plan, now, is to pass that luck along, to make more luck for more people. That started in Guelph on Friday with the second annual Pevs Protects Fundraiser and continues in Dallas on Sunday, when the Stars play the Boston Bruins (12:30 p.m. ET; NBC, NHL.TV). The Stars are hosting Pevs Protects Day for the American Heart Association, and before the game there will be CPR demonstrations in Victory Plaza near American Airlines Center.

Then the Peverleys will head back up north to Kitchener, Ontario, on Tuesday for their third event in five days.

These are not easy for Rich, 34, or Nathalie. It is emotionally taxing to revisit and relive some of the worst moments of their lives, to draw attention to themselves again and again, to something that now seems to have happened so long ago.

But then they look around them, at people like Liam Flaherty, the 12-year-old who dropped the puck with Rich before an Ontario Hockey League game between Guelph and Erie on Friday, and who survived his own cardiac arrest last June 27 due to the CPR knowledge of a teacher and the defibrillator brought by EMS, and it all makes sense. It all seems worth it.

CLICK HERE TO READ THE FULL STORY AT NHL.COM