Russians battle back for 4-3 win in Swift Current 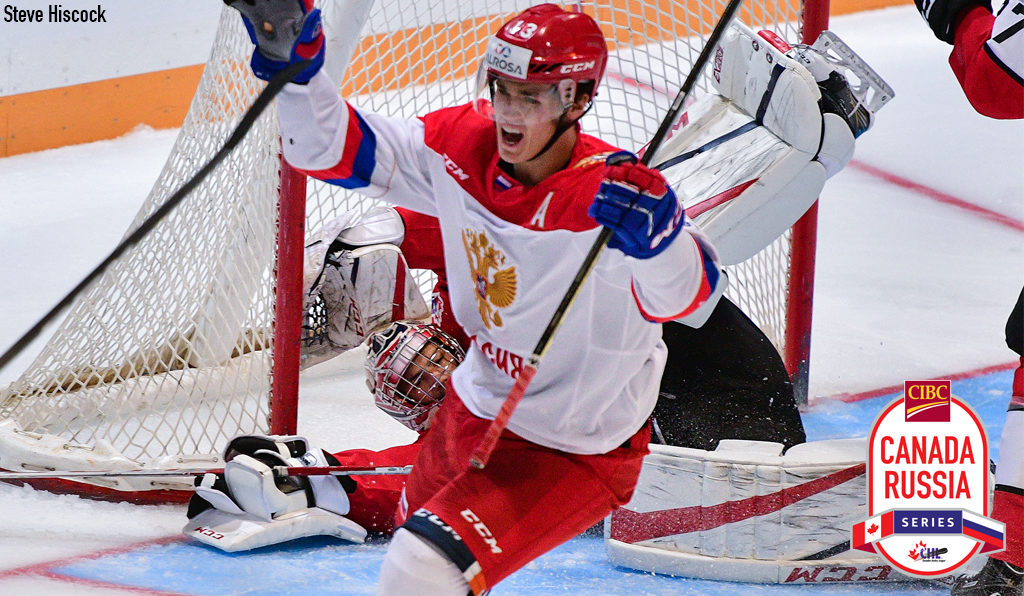 Swift Current, SK – New Jersey Devils prospect Mikhail Maltsev’s second of the night with 7:54 left in the third period completed the comeback as Russia battled back from a 3-0 deficit to defeat Team WHL 4-3 in Game 2 of the 2017 CIBC Canada Russia Series.

Maltsev’s shorthanded game winner rounded out a three-goal third period for the Russians as the series transitions to the Ontario Hockey League on Thursday night in Owen Sound tied 3-3 in points.

Russia scored three times on eight third period shots, battling back to silence a sold out Credit Union iPlex in Swift Current as Winnipeg Jets prospect Mikhail Berdin made some timely saves to close out the win.

“They played us a lot harder tonight and we expected that,” said Team WHL’s Sam Steel (Regina Pats). “We had a couple of bad bounces, a couple of turnovers and they capitalized on those. They got a good performance in net and we didn’t capitalize the way we did last night.”

“It seemed like every shift we got a little bit more comfortable, started making more and more plays,” Steel noted of his line alongside Dube and Tyler Steenbergen (Swift Current Broncos). “You don’t get a chance to play with guys like that too often, so it was a lot of fun.”

Russia overcomes a three goal deficit with three in the third to take Game 2 of the @CIBC #CANvsRUS Series by a score of 4-3 in Swift Current.

After registering just 20 shots on Monday the Russians came out firing in Game 2, outshooting Team WHL 17-6 in the opening frame as Edmonton Oilers prospect Stuart Skinner (Lethbridge Hurricanes) was big when called upon.

Though outshot, the WHL took out the game’s first lead on the power play just 1:27 into action as Dube finished on his own rebound from close quarters with assists from Steel and Jake Bean (Calgary Hitmen).

Team WHL passed a big test in the opening frame, killing off a five-minute major charged to Tanner Kaspick (Brandon Wheat Kings) to enter the second period up 1-0.

After Skinner stopped Russian defenceman Artyom Minulin (Swift Current Broncos) on an early second period odd-man rush the WHL power play went back to work as Quenneville increased the lead to 2-0. Quenneville finished off a Dube cross-crease feed at 6:17, beating a sprawling Berdin across the crease.

Quenneville struck again on the power play just over two minutes later at 8:33, giving Team WHL three power play goals in a single game for the first time since 2011. Dube and Steel picked up assists once again as Team WHL was in full control up 3-0 midway through the contest.

Russia caught a break later in the second after Berdin stopped Kole Lind (Kelowna Rockets) on a penalty shot attempt.

Mikhail Maltsev scored Russia’s first goal of the series with 3:38 left on the clock, keeping a puck in at the offensive blue line before working with Alexey Polodyan and Maxim Tsyplakov to wrist a shot past Skinner from the high slot.

The opportunistic Russians came on strong early in the third period as big defenceman Artyom Maltsev couldn’t beat Skinner on his first attempt from the right faceoff circle, but followed up on his own rebound at 6:28 to cut the WHL lead to 3-2.

Chicago Blackhawks third round selection Andrey Altybarmakyan took advantage of a Team WHL miscue to knot the score at three midway through the third. His unassisted goal saw him pick off an errant WHL outlet pass and out-wait a sprawling Skinner on the forehand.

Mikhail Maltsev completed the comeback, taking advantage of a fortunate bounce off the boards that saw a loose puck bounce back out into the slot where he quickly sent a release past Skinner from the high slot at 12:06.

Russia took the shooting column 33-32, marking the first time they’ve outshot Team WHL in the event since November 15th, 2012. Team WHL finished the night 3-for-6 on the power play and finished 57% (34-of-60) in the faceoff circle.

Dillon Dube (Kelowna Rockets) led the WHL in series scoring with five points (2-3–5) over two games. He becomes just the second WHL player in event history to register five points in a series, joining Collin Shirley (Kamloops Blazers) who did so in 2015.

The Western Hockey League wraps up the series with an all-time record of 20-7-1-2, sending the series to Owen Sound for Game 3 on Thursday against Team OHL.

Thursday’s matchup can be seen on Sportsnet Ontario, East and Pacific when the puck drops at the Harry Lumley Bayshore Community Centre at 7:00pm ET/4:00pm PT.