Player of the Week Ryan Merkley 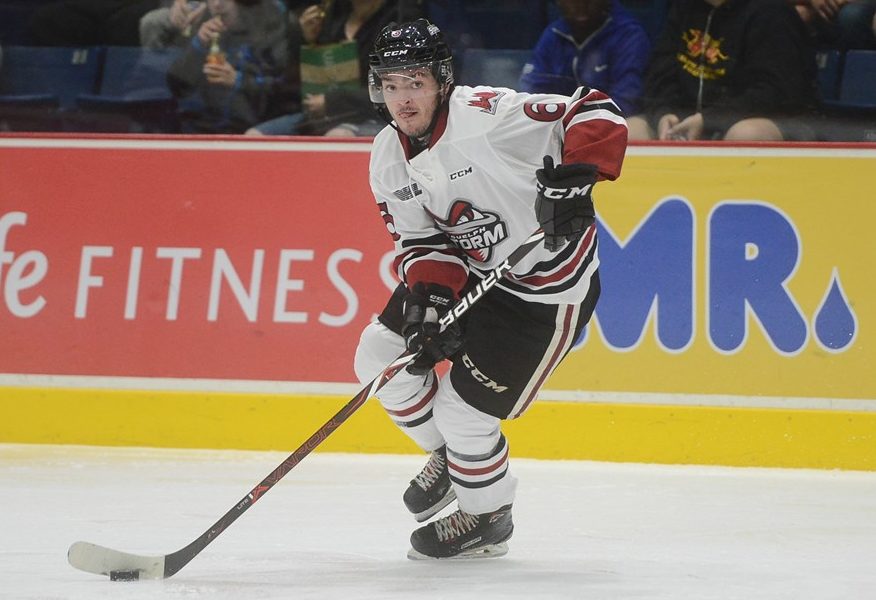 The Guelph Storm announced today that defenceman Ryan Merkley is the Player of the Week for the week ending Sunday, October 14th, 2018.

Recording four points in three games, Merkley was a key contributor in the Storm’s four points this past weekend. Sunday’s 3-2 overtime win over the London Knights was Merkley’s best game of the weekend. The San Jose prospect had a hand in all three of the Storm’s goals including assisting on the overtime winner with just 21 seconds into the extra period. Named first star of the game, Merkley also scored the Storm’s second of the game and set up Zach Poirier in the first for his second of the year. Held off the scoresheet in Saturday’s loss to Sarnia, the Oakville native scored the insurance marker in Friday’s 6-3 win over the Attack.

Returned from the Sharks late in September, Merkley has had an immediate impact on the Storm’s play. The 18 year old’s 10 points put him fourth in Storm scoring and third in the league in defensive scoring. Losing just once with him in the line-up, the Storm’s power play has jumped to first in the league thanks partly to Merkley’s five power play assists.

Honourable mention for the Storm player of the week is forward Tag Bertuzzi who also had four points in three games. Bertuzzi’s three point performance on Friday earned him second star honours. He also recorded one of the three Storm goals sored in the 6-3 loss on Saturday in Sarnia.

Next up, the Storm play a rare Friday away from the Sleeman Centre as they make the short trip to Kitchener for a 7:30pm start. Saturday they are off to Owen Sound before returning home to the Sleeman Centre on Sunday afternoon to faceoff against the Rangers for the second time in three days.  Tickets are still available for Sunday’s game and can be purchased by visiting or calling the Guelph Storm Box Office at 519-837-9690 or online at tickets.guelphstorm.com.