Stevenson a heart and soul guy for streaking Storm

Articles From the Stands Keegan Stevenson 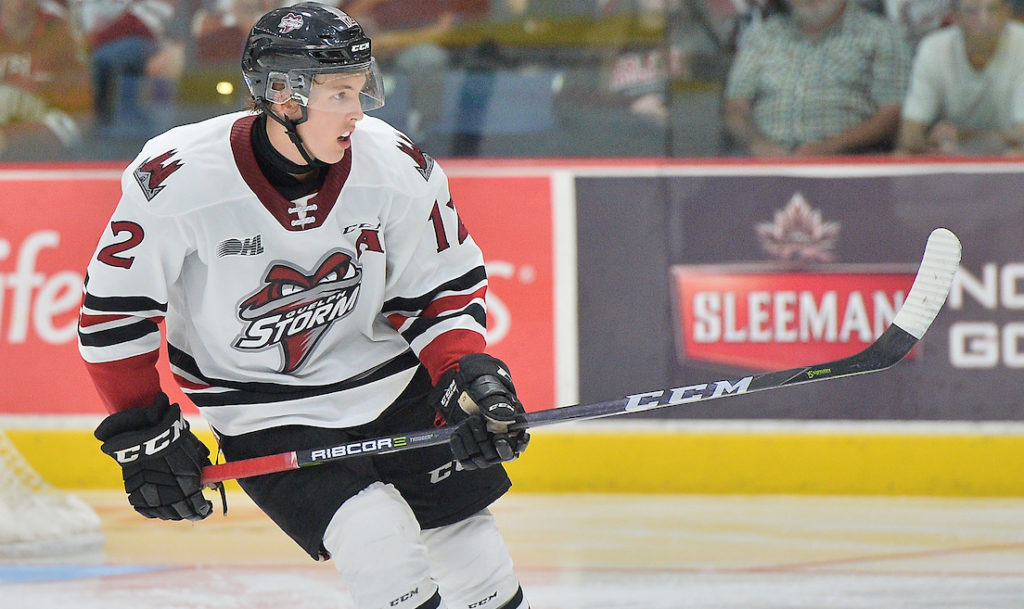 Keegan Stevenson is the heart and soul, dependable player that every good team needs. He goes up and down his wing, makes all the simple plays and is tough to move off the puck. Much of that proficiency comes with experience and hard work. Generally, he is a player that coaches love … low maintenance, willing to do the unglamorous work that wins games, and can score important goals along the way.

“He is just real solid every night,” said coach and GM George Burnett when asked about his third year forward. “His choices, his compete, his pace has really been elevated. He’s protecting the puck and he’s scoring some important goals. It’s nice to see him being rewarded for all the hard work that he puts in.”

Stevenson is enjoying his role as a leader on the team. Coming off an OHL championship and a Memorial Cup appearance, the dynamics of the team has changed drastically.

“It’s definitely crazy,” he said referring to the fact that so many older players graduated in the off-season. “We have a lot of young guys here (now) but we have a good leadership group that is trying to teach them the good things to do out there so we tell them to keep on working hard and not give up. I’m enjoying the leadership role.”

In a rebuilding season where little was expected, the Storm has surprised many with a 9-4-1-2 start, which is keeping them in race in the ultra-competitive Western Conference. That sterling record currently sees them in 7th place, but just three points out of first.

The Sault Ste. Marie native isn’t the most highly skilled player but he thrives through his dedication to get better every day.

“We have days where guys can stay a little later and its natural the older guys that play a lot of minutes get off (early), but he’s often one of those guys that stays and puts in an extra 15, 20 or 30 minutes of extra work and I think it really benefits his game,” said Burnett. “Hopefully the kids like (Marko) Sikic, (Jacob) Maillet, (Cooper) Walker and (Ben) McFarlane see that and how he benefits from the extra work.”

“I do those extra things so I can make it further in hockey,” said Stevenson. “I love the game and hopefully I can end up somewhere with a good career.”

From the Land of Oz … The Storm extended their current win streak to six with a 6-3 win in Kitchener last Friday night. Danill Chayka and Cam Hillis had two goals apiece in the victory. Then Saturday, they didn’t play their best game but managed to come back from 2-0 down to beat the (1-14-2-1) Kingston Frontenacs 4-2. The duo of Cam Hillis and Pavel Gogolev has been on a real roll for the Storm. In their last 11 games Gogolev has racked up nine goals and 13 assists and Hillis has six goals and 18 assists…Guelph has a strong test this weekend when they host Owen Sound Friday night and Saginaw at 4pm Saturday afternoon. Both teams are ahead of Guelph in the tight standings.