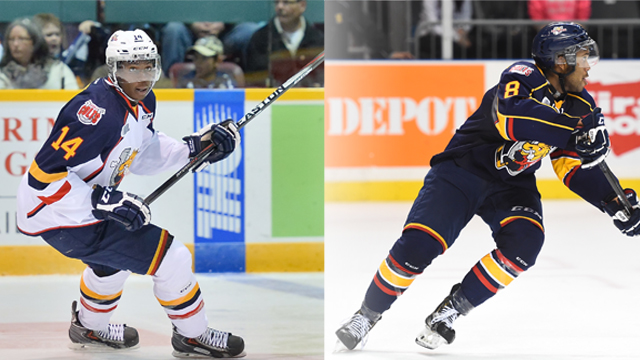 GUELPH, ON — Storm General Manager Mike Kelly has announced the acquisition of C.J Garcia and Givani Smith from the Barrie Colts in exchange for defensemen Ben Harpur and Chadd Bauman.

“This is a trade that makes sense for us now and in the future,” said Kelly. “We receive an experienced defenseman in C.J Garcia and a big, strong player in Givani Smith to make us tougher to play against.”

“C.J will be able to take some of the minutes that Ben Harpur had been playing for us, and we also are able to gain some years and some draft picks for the future.”

Garcia, a defenseman and native of Pickering, has 10 points in 35 games with the Colts this season. In parts of three seasons with Barrie, he tallied four goals, 16 assists and 82 PIM in 120 games.  The 6’0″, 185lb Garcia was originally taken by the Colts in the third round (48th overall) of the 2012 OHL Priority Selection.

Smith, a 6’1″, 197lb. left wing from Toronto, was the Colts’ first pick (13th overall) in the 2014 OHL Priority Selection.  He posted four assists in 31 games as a rookie with the Colts this season, following an outstanding Minor Midget season with the Mississauga Senators in 2013-14.

Harpur and Bauman leave the Storm having been integral parts of the team’s run to the 2014 MasterCard Memorial Cup.

Harpur posted a career-high 20 points in 28 games with the Storm this season and also played in the 2014 Subway Super Series in November.  In 196 games over four seasons with the Storm, he collected 55 points and accumulated a plus-59 rating.

Bauman tallied three goals and five assists in 36 games with the Storm this season. During three seasons in Guelph, he had 21 points and 174 PIM, while splitting time between defense and forward.

The Guelph Storm Hockey Club would like to thank Ben Harpur and Chadd Bauman for their tireless dedication to both the Storm and the City of Guelph.  Both players have left strong impressions on the ice and in the community and we wish them luck in the future.

Garcia and Smith are expected to make their Storm debuts Friday night when the Storm host the Mississauga Steelheads at 7:30PM.

There will be several new faces in the lineup, as newly acquired forwards Ryan Foss and Tyler Hill will also make their debuts after being acquired yesterday from Windsor and Ottawa, respectively.