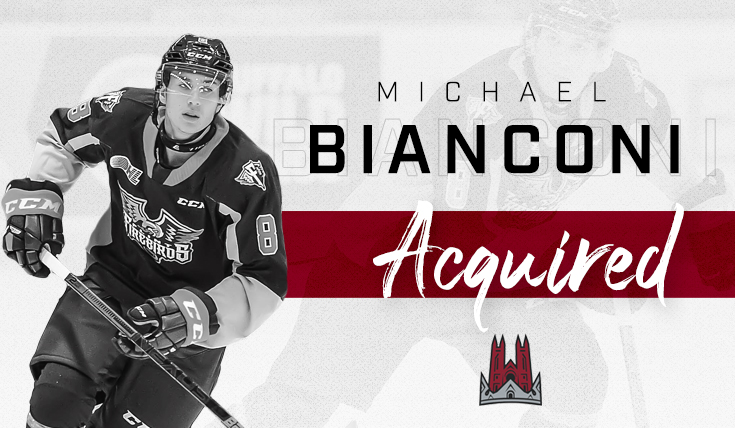 GUELPH – Guelph Storm General Manager and Head Coach, George Burnett, has announced that the Storm have acquired defenceman Michael Bianconi, a second round pick (MISS) in the 2021 OHL Priority Selection as well as and a second round pick (FLNT) in 2022 and two conditional picks (2nd HAM in 2024 and a 5th FLNT in 2022) from the Flint Firebirds in exchange for Owen Lalonde.

Coming to Guelph is Bianconi, a 6’00, 170- pound defenceman in his second year in the league. He was drafted by the Firebirds in the 3rd round of the 2018 OHL Priority Selection.

“Michael is an outstanding skater who has the ability to move the puck well and competes hard every night,” Burnett said. “We expect him to play a big role in our club moving forward.”

Heading to Flint is Lalonde, a 6’1”, 186-pound defenceman from Windsor, Ontario who was the second overall pick in the 2016 OHL Priority Selection. Though unselected at the NHL Draft, Lalonde did attend Rookie Camp with the Detroit Red Wings in September.

“This was a very difficult decision to make at this time,” Burnett said. “Owen is a valued member of our leadership group and played an important role in our Championship run last spring.”

The Storm would like to thank Owen and his family for their support and dedication over the past three years. We wish Owen the best of luck in the future.