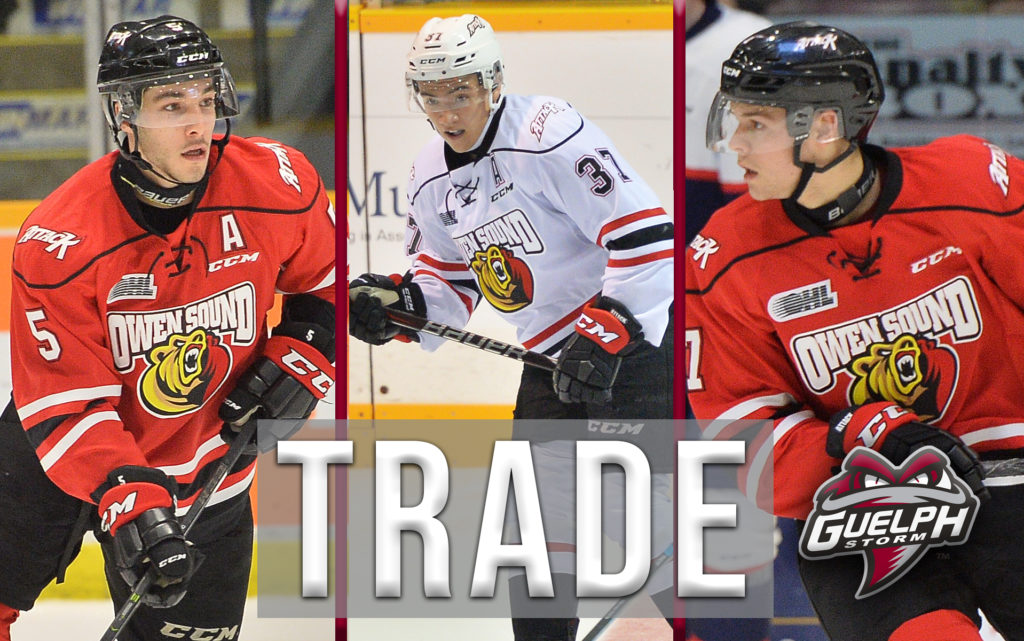 Suzuki, a five-foot-11, 183-pound centre from London, Ontario was a first round pick (14thoverall) by the Attack in the 2015 OHL Priority Selection and was later selected by the Vegas Golden Knights in the first round (13thoverall) at the 2017 NHL Entry Draft. Suzuki is now a prospect of the Montreal Canadiens following a trade in 2018.

“Nick is one of the premier players in the CHL and possesses elite offensive tools,” said Burnett.  “His world class, game-breaking skill is a very exciting thing to add to our lineup.”

Most recently, Suzuki represented Canada at the World Junior Championship in Victoria/Vancouver, recording three assists in five games played adding to his international experience which includes appearances for Canada at both the 2015 World Under-17 Hockey Challenge and the Ivan Hlinka Memorial Cup with the Under-18 team in 2016.

Roberts, a six-foot, 178-pound winger from Stouffville, Ontario was a fifth round pick (93rdoverall) by the Attack in the 2015 OHL Priority Selection.

Suiting up for 118 games through parts of four seasons with the Attack, the 1999-born forward was registered 42 points (20 goals, 22 assists). In 24 games this season, Roberts has posted six goals for eight points through 24 games.

“Zach is a very versatile player that can bring speed and tenacity to our lineup,” said Burnett.  “He will play a much needed role for us and can contribute at both ends of the ice.”

Durzi, a six-foot, 187-pound defenseman from Mississauga, Ontario was a 12thround pick (228thoverall) by the Attack in the 2014 OHL Priority Selection, while later being selected in the second round (52ndoverall) by the Toronto Maple Leafs in the 2018 NHL Entry Draft.

“Sean is an outstanding defenseman that is able to make players around him better,” said Burnett.  “We are excited to see his speed, skill and high-end effort level added to our blue line.”

The 1998-born blueliner has played 163 games through parts of four seasons with Owen Sound, adding 30 goals and 89 assists for a total of 119 points. Through 18 games this season, Durzi has posted 16 points (three goals, 13 assists) and has a plus-eight rating. Durzi also brings 33 games of post-season experience where he registered 26 points (five goals, 21 assists), along with a plus-eight rating.

Suzuki, Roberts, and Durzi will make their Storm debut on Thursday when the team visits the Niagara IceDogs.

“We are excited to announce this transaction that adds three very significant pieces to our group,” said Burnett.   “However, all three of Zach, Barret and Mark represented the Storm very well on the ice and in the community, and this was a very difficult decision to make.”

The Storm would like to thank Poirier, Kirwin, and Woolley for their respective commitment and dedication to the team.

Poirier, acquired in a trade with the North Bay Battalion prior to the 2017-18 season, played 92 games in a Storm uniform over parts of two seasons, recording 15 goals for 32 points, and has totaled a career 275 regular-season games played, tallying 95 points (53 goals, 42 assists). The overage forward was also an integral part of the team’s leadership group donning a letter both seasons, as well as a dedicated leader and significant contributor in the community.

A sixth round (120thoverall) pick of the Storm in the 2016 OHL Priority Selection, Kirwin has played 159 games in Guelph, posting 61 points (27 goals, 34 assists) throughout his three-year career. This season, the 2000-born forward has totaled for 21 points (nine goals, 12 assists) in 36 games played. Kirwin was also a quiet leader on the ice, demonstrating a work ethic that Storm fans will remember for seasons to come.

Woolley was a third round pick (54thoverall) pick of the Storm in the 2017 OHL Priority Selection, playing a total of 95 career games in Guelph while posting 15 points (four goals, 11 assists). The 2001-born defenseman has six points (two goals, four assists) this season, with a plus-13 rating. Off the ice, Woolley also developed into a leader quickly in the Royal City, becoming a significant member of the team’s community efforts.

“It is never easy to say goodbye to such outstanding young men, but we know they will each be successful with their new opportunities.  We wish them well in the future.”

The Storm wish the very best of luck to all three players in their future with Owen Sound and beyond.