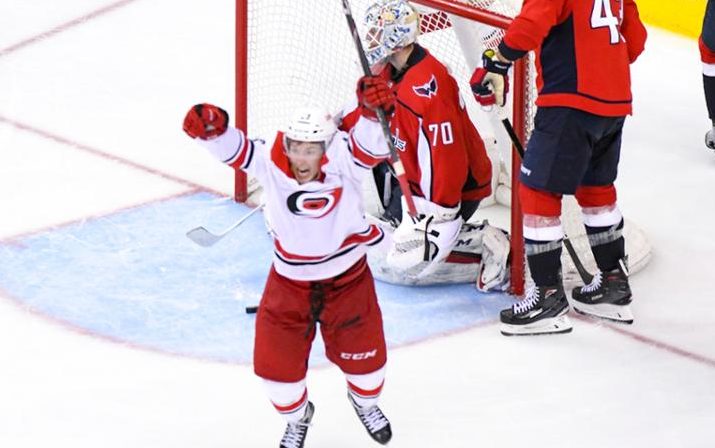 Brock McGinn scored 11:05 into the second overtime, and the Carolina Hurricanes rallied to eliminate the defending Stanley Cup champion Washington Capitals with a 4-3 win in Game 7 of the Eastern Conference First Round at Capital One Arena on Wednesday.

The Hurricanes, who trailed 2-0 and 3-1 in this game and 2-0 in the best-of-7 series, advanced to the second round for the first time since 2009 and will play the New York Islanders.

“We got some huge goals by some big players, huge saves by Petr [Mrazek] when we needed them, a huge goal by Jordan [Staal] to start the third period,” Carolina captain Justin Williams said. “We didn’t give up. When it was 2-0, we told ourselves we wouldn’t let it snowball like we did in the other games. We regrouped and stayed with it.”

McGinn deflected a pass from Williams past goalie Braden Holtby after the Hurricanes lost a face-off in the Capitals zone but regained the puck.

“It’s just a screen shot out of the corner,” said Holtby, who made 38 saves. “Not sure if it was off the ice or not. I don’t know. It’s just one of those plays that are hard to the front and you have to work for it.”