Storm come back to defeat Otters in tight contest 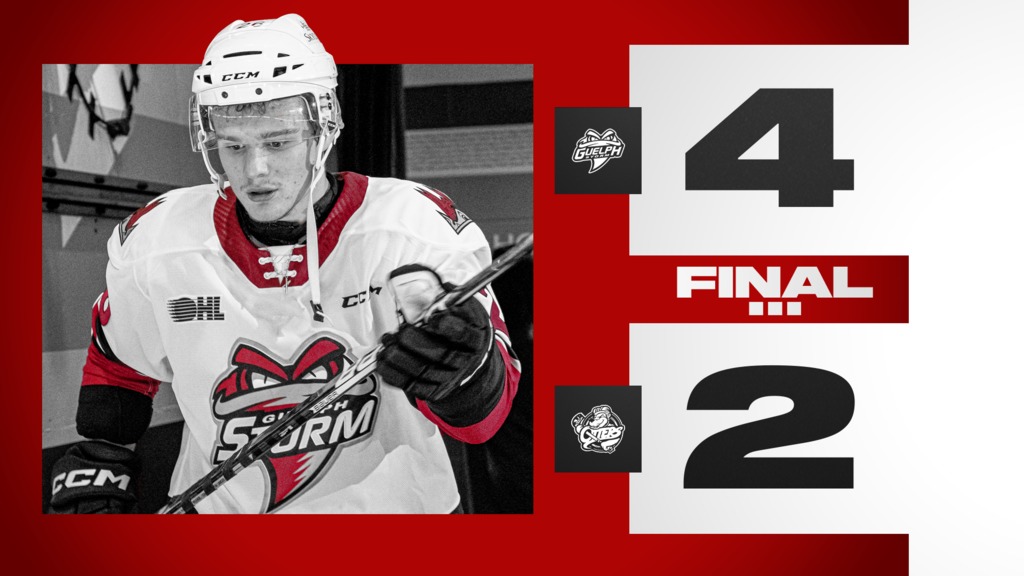 Jake Murray displayed late game heroics in the Guelph Storm’s 4-2 comeback win over the Erie Otters on Friday night at the Sleeman Centre.

Murray assisted the game-tying goal and scored the winner when he fired a slapshot past the blocker side shoulder of Erie goaltender Nolan Lalonde in front of over 4,000 fans.

With the victory, the Storm improved to 9-13-2-1, while Erie dropped to 10-10-0-3. Erie is on a four-game losing skid but remains in third place in the Midwest Division. Guelph has won five of their last six games and are one point behind the Otters.

Erie got on the board first, scoring a pair of goals in the middle stages of the first period to jump out to a two goal lead. Sam Alfano capitalized on a rebound opportunity in front of Guelph’s net 11 minutes in to score the first goal of the game. Brett Bessette found the back of the net with a one-timer on Erie’s two man advantage 2:47 later to score his team-leading eleventh goal of the season.

Danny Zhilkin scored Guelph’s inital marker when he wired a shot top-shelf for a power play goal with 43 seconds remaining in the opening period. With the goal, Zhilkin extended his point-streak to seven games with nine points in that stretch. He leads the Storm in goals with 11 and is second on the team in points in 2022-23.

Max Namestnikov tied the game at two with 6:22 remaining in the third period, cashing in on a centring pass from behind the net by Jake Murray. Just 4:28 later, Murray ripped a slapshot from the point to score his first game-winner in his Ontario Hockey League career. Cam Allen added an insurance marker with an empty-net goal on a shot from behind Guelph’s blue line.

Murray is second on the Storm in assists and leads the team in points by a defenceman with 17 in 2022-23.

“I feel really good, I just happened to be in the right place at the right time,” said the 6’3″ defenceman, post-game.

“All that matters is that we got those two points, we’re trying to dig ourselves out of a hole we put ourselves in at that start of the year.”