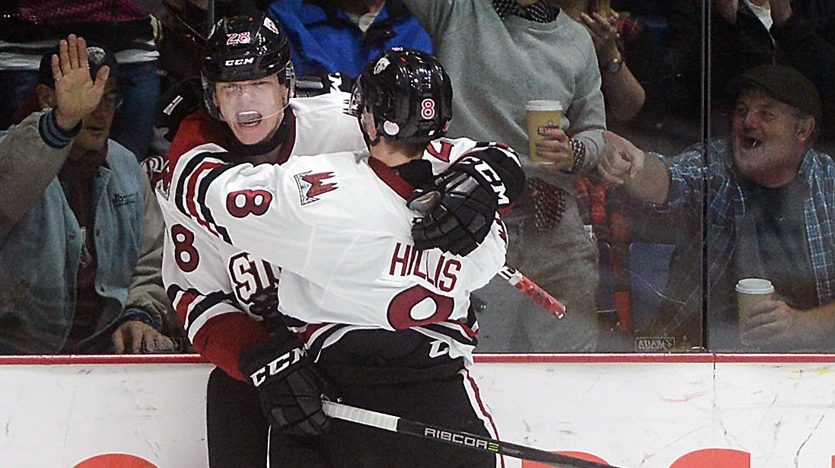 Following an impressive comeback win over the Kitchener Rangers on Tuesday night at the Sleeman Centre, the Guelph Storm paid a visit to The Aud on Friday, downing their Highway 7 rival for the second straight game in a 6-3 final.

In the win, Isaac Ratcliffe hit a career milestone of 40 goals on the season while also adding an assist for first star honours. On the blue line, rookie Mark Woolley registered a milestone of his own in his career’s first multi-point game with two assists, earning second star recognition. Also putting in a solid performance was Cedric Ralph with two goals on the night.

For the Rangers, Joseph Garreffa led the way offensively with two assists.

Anthony Popovich and the Rangers’ Mario Culina were the goaltenders, turning aside 23 and 29 shots respectively.

In the first, the Storm put together a 2-1 lead following a fairly strong period with the exception of a defensive zone turnover that led to the Rangers’ Eric Guest tying the game up at one-a-piece just past the halfway point. Just short of five minutes later, Cam Hillis found Mason Primeau who buried his seventh of the year to add to Ralph’s game opener 4:47 into the period.

The Rangers jumped ahead for what would be the only time in the match-up minutes into the middle frame, first with Greg Meireles tying things up at two just 31 seconds in, followed by Michael Vukojevic’s first career goal minutes later to make it 3-2 for the blue shirts.

1:46 later though, Ralph knotted things up on the board once again, redirecting a point shot for his second of the game.

In the latter half of the frame, Ratcliffe potted his 40th of the season in what would be the eventual game winner, making it a 4-3 contest heading into the final period.

In the final 10 minutes of the game, Hillis scored the lone power play marker of the game on a two-man advantage, registering his 20th of the year, while Alexey Toropchenko got the empty net marker with 17 seconds left.

Up next, the Storm close out the 2017-18 regular season schedule in Erie on Saturday night.