Storm open with a win 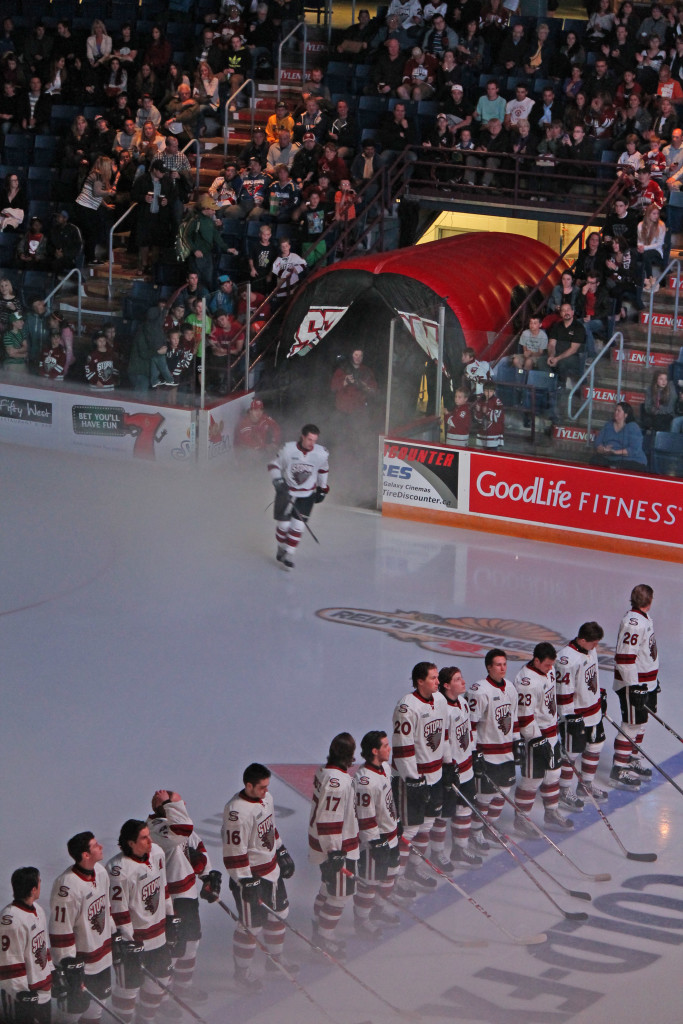 By Brendan Zwambag, GuelphStorm.com – Zac Leslie scored on the only shot in overtime to lift the Guelph Storm to a 4-3 win in their season opener against the Erie Otters on Friday, Sept. 20, 2013.

“We were good, but we weren’t as good as we should be,” said Coach Scott Walker, noting that newly acquired goalie Justin Nichols held them in the game.

Nichols, arriving from the Soo Greyhounds yesterday, stopped 36 of 39 shots in his Storm debut, including a diving save on Dane Fox with five minutes to play in the third period.

“Whoever didn’t pick the goalie [Nichols] as the star, I don’t know, but he played unbelievable, gave us the chance to win,” said Walker.

Leslie received first star accolades for his performance that saw him snap a shot from the high slot over a sprawling Oscar Dansk in the Erie net after collecting two assists earlier in the game.

Leslie and Brock McGinn teamed up with Fabbri for the first Storm goal of the season, a 4-on-4 marker. Fabbri, alone in front, fired a shot over the blocking arm of Dansk after receiving a pass from McGinn in the corner. The goal tied the game less than two minutes after Stephen Harper opened the scoring with a short-handed tally.

Michael Curtis restored Erie’s lead with a powerplay goal midway through the first period, sliding home a rebound after a Nichols’ pad save. Connor Brown and Adam Pelech received assists on the play.

Dickinson replied for the Storm just before the end of the first period. An offensive zone face-off win, following a Fox penalty that sent the teams to 4-on-4 play once again, led to a Dickinson deflection off Matt Finn’s point shot. Rookie defenceman Garrett McFadden also assisted on the play, picking up his first career OHL point.

Brown scored the only goal of the second period on a partial break, pulling the puck to his forehand before tucking it past the left pad of Nichols. Connor MacDavid assisted on the play.

Bertuzzi set up the overtime frame with a powerplay goal at the 12:47 mark of the third period. With Fox and Jake Evans serving penalties for the Otters, Storm defenceman Ben Harpur fed a cross-ice pass to Bertuzzi, who made no mistake on the one-timer that beat Dansk glove side. Leslie recorded his second assist of the game on the goal.

Overtime lasted just 13 seconds, as Dickinson got Dansk out of position with a move around the net. Leslie jumped all over a loose puck in the slot, firing it over Dansk, who finished with 32 saves on 36 shots. Harpur also received an assist on the game-winning goal.

Fabbri was named the game’s third star and Brown earned the second star.

The Storm season continues next weekend with home games against on the Oshawa Generals and London Knights. The Generals come to town for a 7:30 meeting on Friday, Sept. 27 and the Knights will face-off at the Sleeman Centre on Sunday, Sept. 29 at 2 p.m. 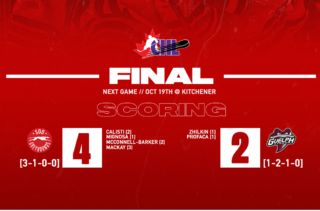 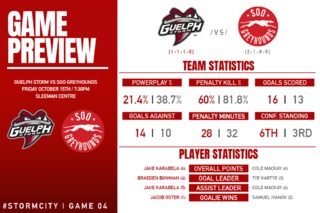 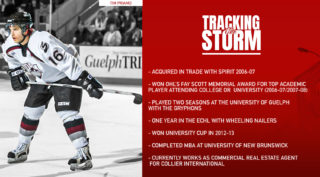 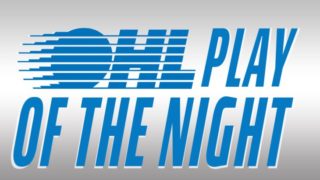 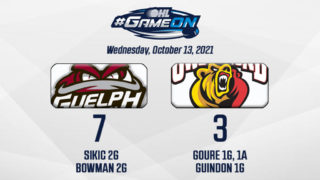