Storm outplayed by Otters in 4-1 loss 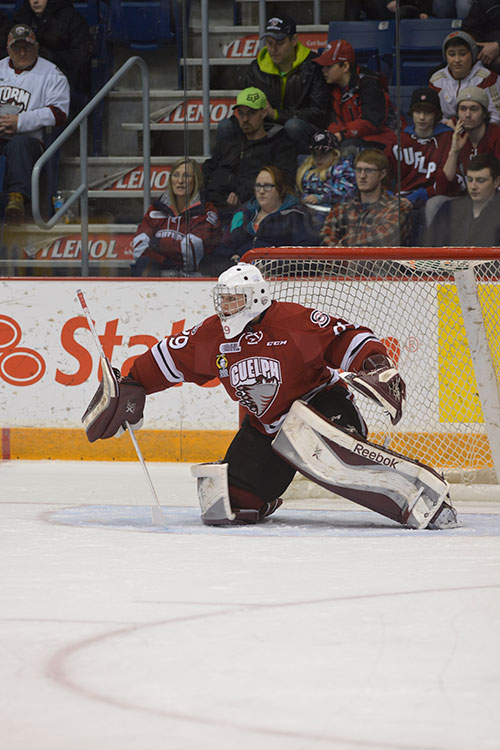 At least the Guelph Storm only have to play the Erie Otters one more time this season.

The Storm dropped their fifth straight game to the Otters and ninth straight overall as they were on the wrong end of a 4-1 score Friday night at the Sleeman Centre.

Dylan Strome and Alex DeBrincat led the way offensively for the Otters with four points each as Devin Williams had 25 saves for his 39th victory of the season.

The visitors wasted no time getting to work in their final visit to Guelph this season.

After a Givani Smith interference penalty gave the Otters their first power play of the evening, DeBrincat provided his team with a 1-0 lead just 1:20 into the game. DeBrincat slapped a one-timed shot from the slot to beat Van Schubert blocker-side.

A solid Erie defence and even stronger forecheck helped keep the Storm without a single shot on goal through the first 11 minutes.

DeBrincat netted his second of the game with 3:50 remaining in the opening period. Positioned in the slot near the right circle, DeBrincat received a pass from Taylor Raddysh and snapped the puck into the left side of the net by the blocker of Van Schubert.

Erie took a 2-0 lead into the intermission while outshooting the home team 13-6.

In the second period, it was the Otters who continued to get quality chances while putting pressure on the Storm and Van Schubert.

On another power play, a defensive lapse by Guelph allowed Jake Marchment to find Strome alone in front of the Storm crease, where he one-timed a shot low to the glove side of Van Schubert as Erie jumped to a 3-0 lead.

Van Schubert made some spectacular stops through the first 40 minutes of the contest, including two consecutive breakaway saves on Brett Neumann and Darren Raddysh.

In the third and final frame, the Otters continued to shut the home team down and limit any opportunities for grade-A scoring chances.

Guelph’s best chances of the night came with 2:30 to go in the game when they broke into the Erie zone on a three-on-one rush. The entry led to a number of scoring chances before Garcia finally broke Williams’ shutout bid with 1:59 remaining.

Garcia wristed a low shot through traffic and past Williams as the Storm captain notched his fourth goal of the season to make it 3-1 late in the game.

However, the Otters would put the icing on the cake when DeBrincat scored an empty-net goal, his team-leading 48th of the season, to record his fifth hat-trick of the year as Erie took this one 4-1.

The Storm are right back at it when they head to Erie tomorrow night for the second of a home-and-home with the Otters. Puck drop is scheduled for 7:00 p.m.

– Tonight’s game was the 5th of 6 meetings between the two teams this season. Erie currently leads the season series 5-0.

– Guelph has been outscored 23-6 by Erie in 5 games this season.