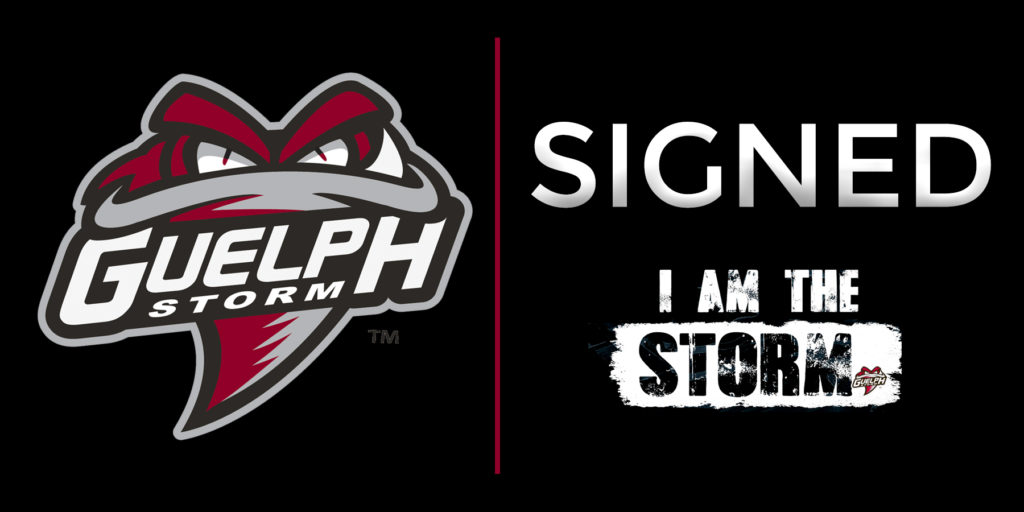 General Manager and Head Coach George Burnett announced Monday that the team has signed a trio of players from the last two OHL Priority Selections. Ben McFarlane (2018), Luka Profaca (2018) and Steven Grant (2017), have all committed to an Ontario Hockey League Standard Player Agreement with the Storm.

“Ben’s physicality and offensive presence will be a big part of our club in the future,” Burnett said.  “We look forward to monitoring his development closely and working with him to realize his potential.”

Drafted in the sixth round, the five-foot-seven, 160-pound right winger had 15 points (10 goals, five assists) in 12 games in the postseason, while adding a goal in four games through the 2018 OHL Cup Showcase.

“Luka had an excellent training camp and we see him as a big part of our future plans,” Burnett said.  “He brings an infectious attitude and a well-rounded skill set.  With a great year of development, he has the potential to be an impact defenseman in our league.”

At the season-ending OHL Cup Tournament, the 6’ 1 defenceman had an assist and eight penalty minutes, along with an even plus-minus rating in four games.

Grant, chosen in the 10th round of the 2017 OHL Priority selection, played the 2017-18 season with the Listowel Cyclones of the GOJHL recording 13 points, three goals and 10 assists in 48 games.

“Steven had an excellent first year of junior hockey last season in Listowel, winning a championship and showing significant development,” said Burnett.  “He is a tireless worker and brings an intriguing combination of character, speed and tenacity.”

The trio are expected to get some exhibition game play over the coming weeks.

The Storm hit the ice Saturday for the first of three home pre season games. Tomorrow night, the Peterborough Petes visit the Sleeman Centre for a 7pm start. Monday, the Storm host the Mississauga Steelheads for a 2pm start. The final pre season game is set for Saturday, September 15th against the Hamilton Bulldogs at 7pm.

The 2018-19 regular season home opener is Friday, September 21st when your Storm host the Sudbury Wolves.  Join us before the game from 4-7 pm for our free HOME OPENER FAN FEST in St. George’s Square and Old Quebec Street Shoppes.  This free event for all ticket holders will include a family fun zone with inflatables and other activities, plus Food Trucks with free samples and live bands and entertainment.