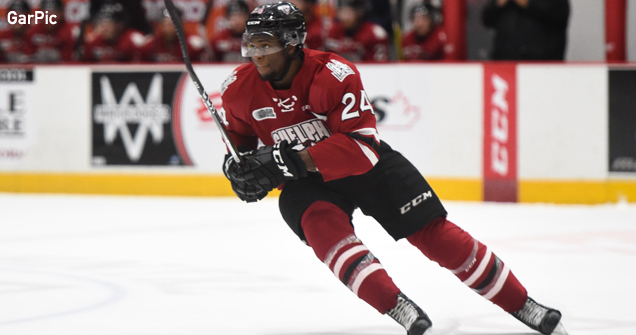 The Guelph Storm put an end to a three-game losing streak on Friday night, downing Midwest Division rivals, the Owen Sound Attack, in a 4-1 final to get back in the win column.

A few multi-point performances were key in grabbing the two points, starting with three assists from Liam Hawel to earn second star honours on the night, with Givani Smith netting two goals — both the game winner and the insurance tally — as the game’s third star. James McEwan also had a strong night with one goal and two assists, while defenseman Dmitri Samorukov potted one goal and one assist and was a plus-4 in his return to the Sleeman Centre after representing Russia in the World Junior Championship.

Goaltender Anthony Popovich was the game’s first star, earning the recognition with an impressive 42 out of 43 saves in the win.

For the Attack, rookie Daylon Groulx had the lone goal, while net minders Olivier Lafreniere and Mack Guzda split time between the pipes.

To start things offensively, the opening frame was almost scoreless before McEwan potted his 10th of the season off a back hand in front with just 1.3 seconds remaining on the clock.

Responding to the late period goal past the mid-way point of the middle frame, the Attack got even with a power play marker as Barret Kirwin was awarded two for hooking.

Just over three minutes later, the Storm took back the lead, starting with a point shot from sophomore Owen Lalonde, only to have Smith tip it in front for the eventual game winner.

2:03 after that, Smith struck again, burying his second of the game and eighth of the season on a rebound that left a wide open net for the Detroit Red Wings prospect.

Samorukov rounded out the 4-1 final, walking in from the point with speed feeding Hawel, who gave it right back for the defenseman to fire a rocket to register his sixth of the year.

The Storm are right back in action on Sunday afternoon, hosting the Sault Ste. Marie Greyhounds for a 2pm puck drop at the Sleeman Centre. Get your tickets online here, by calling (519) 837-9690, or by visiting the Guelph Storm Box Office in Old Quebec Street Mall. With two home games this weekend, fans who purchased a ticket to Friday’s contest, are eligible for tickets to Sunday’s game for just $12!