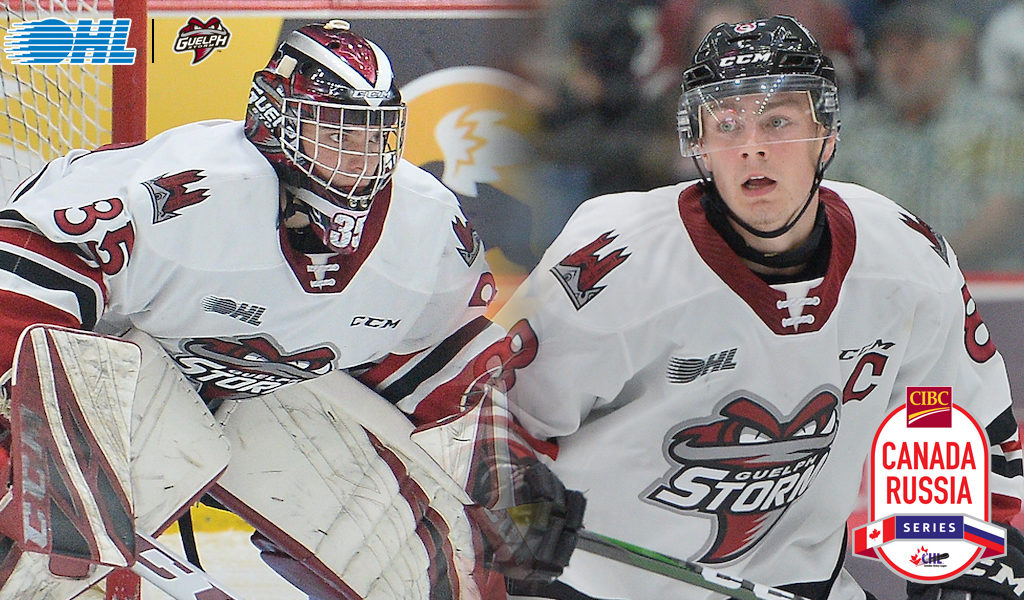 Toronto, Ont. – The Ontario Hockey League, in association with the Canadian Hockey League, today announced that Guelph Storm teammates Nico Daws and Cam Hillis have been added to the Team OHL roster for Game 3 of the 2019 CIBC Canada Russia Series scheduled for Thursday, November 7 in Kitchener.

Additional roster notes for Game 3 include the addition of Ottawa 67’s goaltender Cedrick Andree to the Team OHL lineup. He’ll take the place of Peterborough Petes goaltender Hunter Jones who shifts into Andree’s former spot for Game 4 of the series on Monday in London.

Daws, a 19-year-old from Burlington, Ont. currently leads the OHL with a .933 save percentage to go along with a 2.48 goals-against average and 5-1-1-2 record over nine appearances this season. The 6-foot-4, 202Ib. netminder is in the midst of his third OHL season after hoisting the Robertson Cup as an OHL champion with the Storm last spring. Daws was Guelph’s seventh round pick in the 2016 OHL Priority Selection and was recently named OHL ‘On the Run’ Player of the Week for the week of games ending October 27th.

A third round pick of the Montreal Canadiens in the 2018 NHL Draft, Storm captain Cam Hillis is currently second in team scoring with 20 points (5-15–20) over 14 games this season. The 19-year-old Enniskillen, Ont. native is in his third OHL season, coming off an injury-shortened 2018-19 campaign that yielded 22 points (10-12–22) over 33 games. Hillis represented Team Cherry at the 2018 Kubota CHL/NHL Top Prospects Game in Guelph before being selected by the Canadiens. The former OHL Cup champion was Guelph’s second round (29th overall) pick in the 2016 OHL Priority Selection.

The 2019 CIBC Canada Russia Series continues tonight in Moncton, NB after Russia skated to a 4-3 victory over Team QMJHL in Saint John on Monday.

The 2019 CIBC Canada Russia series is proudly supported by title partner CIBC, and associate sponsors Kia Canada, Cooper Tires, and Kubota Canada.  All games will be broadcast nationally on Sportsnet and TVA Sports.