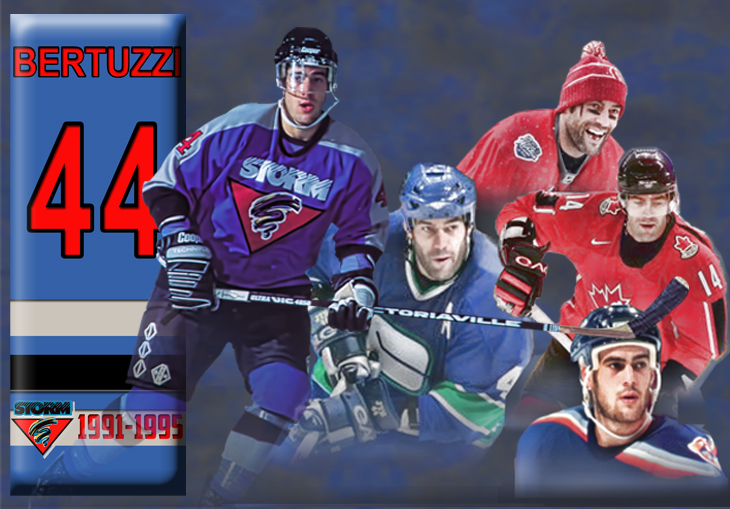 The Guelph Storm Hockey Club announced today that Todd Bertuzzi’s #44 will be formally honoured in a tribute to the former Storm forward who wore the number during his four-year career with the Storm that spanned from 1991-95 before graduating to the NHL where he went on to play 1,159 games over 20 seasons with the New York Islanders, Vancouver Canucks, Florida Panthers, Anaheim Ducks, Calgary Flames, and the Detroit Red Wings. Bertuzzi also represented Canada on three separate occasions, the 1998 and 2000 IIHF World Championships and the 2006 Winter Olympic Games, becoming the first Storm alumnus to represent Canada in the Olympics. #44 will be raised to the rafters of the Sleeman Centre in an on-ice ceremony prior to the home game versus the London Knights on Saturday, November 26th at 4:00 PM.

“Todd Bertuzzi was not only the first ever player selected by the Storm, but he was undoubtedly one of the cornerstones of the franchise,” General Manager Mike Kelly proclaimed. “While Todd was an excellent player throughout his four-year OHL career, it was his play during the 1994-95 season (62GP – 54G – 65A – 119PTS), particularly during the Storm’s playoff run to the OHL finals that year (14GP – 15G – 18A – 33PTS), that was a defining moment of his OHL career, it was easily the most dominant performance that I have witnessed in my 13-year history as the Storm’s General Manager.

“Under Coach Craig Hartsburg, Todd provided our fans with highlight reel plays, night after night‎. It comes as no surprise, that at various times, Todd was described as ‘the NHL’s best power forward.’ To say that we are proud of Todd is an understatement,” Kelly continued. “Todd is a very special person who holds a very special place in the hearts of his teammates, coaches, staff, and literally thousands of Storm fans.”

Bertuzzi’s #44 will be deemed an ‘honoured’ number in the pre-game ceremony, and will join Jeff O’Neill’s #92 as the only two numbers honoured by the Storm. By not retiring sweaters, the team is given the flexibility of celebrating more distinguished Storm alumni from all generations than would be the case if the numbers were retired and taken out of circulation.

The only number retired by the Storm is the #18. Officially Retired in 2008, the number was worn by the late Paul Fendley who passed away after a fatal on-ice accident in 1972.

The game will be the hockey club’s second homecoming game for Storm alumni and their families. All former players and their families will be invited to attend the game on November 26th in several suites hosted by the Storm.